Before 1970: Souls at Sea (1937) - Powdah (George Raft) and Babsie (Olympe Bradna). I didn't know what to expect when I watched this movie, but I certainly didn't expect it to include one of the sweetest -- and saddest -- love stories ever. This is a different type role for George, much softer, not so tough, and he's wonderful in it. Watching George woo the gentle, sweet Babsie (and I mean that in the best way, she's adorable), win her, and then lose her. It was so touching. And yes, George Raft made me cry and cry, too (so, pffft to anyone who says he can't act). 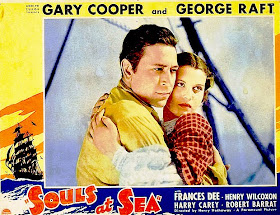 Post 1970: The Wind and the Lion (1975) - the Raisuli (Sean Connery) and Eden Pedecaris (Candice Bergen). I've been sharing these prompts with my sister, and she rolled her eyes when I told her this choice for my favorite love story. She called this movie the most frustrating love story of all time. Hee. But what she hates about it is exactly what I love so much about it. I love the relationship between the two main characters, how it grows and becomes something special and wonderful -- without them ever sharing a kiss or bed or anything physical. When he comes and rescues her single-handedly after her escape attempt goes wrong, okay, that's probably the most romantic moment in a movie ever for me. And at the end, after she's returns the favor and rescues him, when he tells her goodbye: "I'll see you again, Mrs. Pedecaris, when were are both like golden clouds on the wind," I almost always tear up. Definitely my favorite love story in a film. It's also my favorite Sean Connery role, and one of the few films I adore Candice Bergen in. The love story is also intrinsically bound up in Jerry Goldsmith's score, which is some of the most sweepingly romantic music, I know.

Yeah, yeah, yeah, so I don't go for typical happy ending love stories. I can't help what I like.
DKoren at 10:15 AM

The Wind and the Lion is a real treasure. It is my favorite role for Connery and I found Brian Kieth's Roosevelt to be beyond compare. I so enjoy a love story that breaks from the mold.

This is a movie I really hope I'll get to see on the big screen in a revival theater some day. I would love to see it as it was meant to be seen. It is a great film. Thanks so much for commenting on so many of my posts. It's fun to find someone who agrees on many films.