I've always listed this film as one of my top ten Westerns. So, the question I keep asking myself today is why don't I own it and why haven't I seen it in the last fifteen-twenty years? The answer is because I'm stupid. It's still in my top ten, easily, and I love love love this movie more than ever. It was even better than I remembered it, because I don't think I paid all that much attention to the cool dialogue back in the day, whereas now, it just made me grin and grin. Perfect combo of actors: Lee Marvin, Burt Lancaster, Robert Ryan, Woody Strode, and Jack Palance. This was one of the first movies I saw Robert Ryan in, and now I remember why I always thought he was a solid, dependable, and rather sweet guy. I love him and his horses in this movie. The story is cool and slightly twisty, the action is fabulous - trains, dynamite, mine cars, horses, can't ask for more than that!, and the desert and canyon scenery is beautiful and beautifully filmed.

My sister and I were watching the beginning of "The Cassandra Crossing" the other night and she asked me if Burt Lancaster was ever happy in a movie. I said are you kidding? He's so much fun in this movie, flashing that patented grin and blowing things up and losing his pants and doing his own stunts as he almost always did.

"You're going to have to get over this nasty habit of always losing your pants. It's not dignified." - Rico (Lee Marvin)
"It's drafty too." - Bill (Burt)

And then there's Lee Marvin, who is never less than awesome and gets the single best line in the movie:

I watched it twice in a row, making up for lost viewings. Must pick up on DVD asap.

Novels:
1. Synopsis for DTD and revisions
2. P.O.W. -- for which I've somehow lost the outline for the last half. Grrr.

There are no happy endings in WWI movies 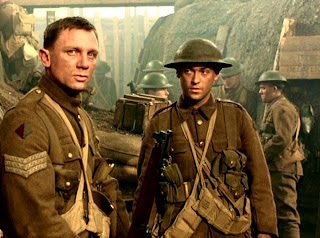 It's been WWI movie week over here, with "The Trench" and "Paths of Glory." The former is a modern film (1999), with Daniel Craig, and was mostly a character study watching the young British soldiers on the eve of what we know from history will be a battle of devastating loss. You know from the get-go no one's going to cross the end credits alive, though that didn't stop me from hoping and hoping and hoping. The lead character Billy, (played by Paul Nicholls) and Beckwith (Anthony Strachan) were particularly fantastic, not that Daniel Craig isn't, it's just that he's a known quantity, and it was fun to have unknown actors to root for. DC makes a particularly fine don't-mess-with-him but caring sergeant. Loved his strawberry jam scene and trying to get whiskey from the lieutenant.

This DVD had an excellent special feature on WWI narrated by Robert Ryan and filled with footage. It made me cry at several points, just the sheer wasteful loss of life endured on all sides. I didn't realize that it was in WWI that the Germans introduced flame throwers, I assumed that was later. Just one more nastiness in a war of bloody nastiness. I learned a lot more about trenches and trench warfare than I had known, and more about the whys and wherefores of Verdun. 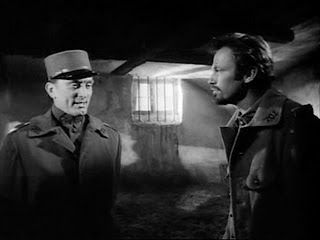 I've seen "Paths of Glory" before, once back in my teenage years. I remember my family watched it because of Kirk Douglas, and I remember being bored because it was not a battle/adventure war movie and, consequently, I wrote it off. Well, there's a prime indicator of silly youth for you. I watched it this morning, and this movie is great; however it was also as stomach-wrenchingly hard to watch as "Ox-Bow Incident," and for similar reasons. Three innocent men there, three innocent men here. Gah! Dana Andrews there, Ralph Meeker here. No more! I'm through! I can't watch any more of my men go through false charges/sham trials, lynching/executions/death again! At least in this one, instead of too-little, too-late Henry Fonda for defense, we've got Kirk Douglas and he is wonderful and awesome here. He's got some fabulous scenes with great dialog. Love love LOVE his scene giving the true cowardly lieutenant the firing squad duty. Pure love! But ultimately, Kirk can't do anything either, and I came *this* close to stopping the movie before it ended. Damn it. Damn damn damn. I'm going to be wrecked the rest of the day now.

But Ralph Meeker was great in all his scenes. He hit it all just right, emotionally, from bravery through bravado to fear and back again. Sigh. (And I got Bert Freed as a sergeant for extra cast bonus!)
Posted by DKoren at 9:51 AM No comments: