This version kind of made me laugh. It's as if someone read the story and said, "What's this? Ivanhoe spends most of the story sidelined? But we've got Robert Taylor lined up for the role! What's up with this Black Knight who keeps rescuing Ivanhoe? King Richard? Bah! Who needs King Richard, give his part to Ivanhoe!" And so, Ivanhoe becomes the Black Knight instead of the Disinherited Knight and any time there is a rescue or heroic action scene by someone else, they give that part to Ivanhoe. He becomes a bit of a superman! Nothing can keep him down. Oh, he still gets wounded, but he bounces right back up so he can go storm the castle himself. Now if you're going to have a movie called "Ivanhoe," and you're unfamiliar with the story, this version might actually be truer to your expectations. But coming to this version last, I was a bit underwhelmed. 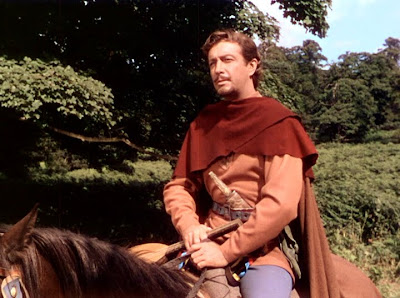 And so far, I think the only movies I genuinely like Robert Taylor in are Westerns. I dig him in Westerns, but in these older period movies? Much as I want to like him, he's just flat and expressionless and seems a bit out of time and place.

Best things in this one are George Sanders and Joan Fontaine. Really, can you go wrong with George Sanders? He is always awesome, purring his lines with that smooth, delicious voice. He makes an excellent Bois-Guilbert in this version. I quite enjoyed his performance. And Joan Fontaine might just be my favorite Rowena in any version. She's beautiful, strong and feminine at the same time. Normally, I'm kind of rooting for Rebecca to win Ivanhoe, but not in this version. In this one, I loved Rowena. I'll admit, though, I'm not an Elizabeth Taylor fan. She was undeniably beautiful when she was young, but her voice always grates on me, and she just didn't sell me on her Rebecca. I guess she kind of fits with Robert Taylor, though. 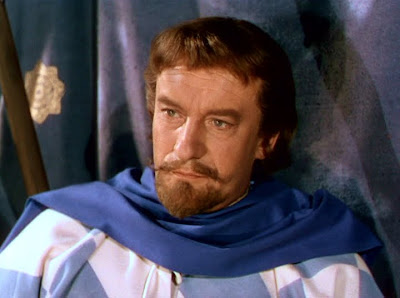 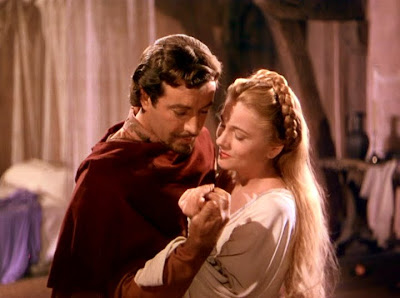 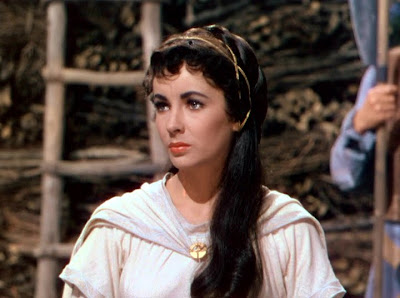 Nice scenery, nice jousting, great storming of the castle, and a first-rate score by Miklos Rozsa also helped this version. This is probably my second favorite Rozsa score after Ben-Hur. He wrote some of the most beautiful and romantic and heroic music ever for this one, and I could listen to it all day. I absolutely love his score. 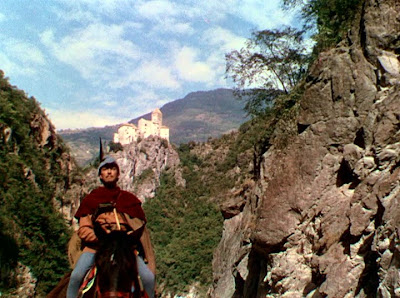 This was the next version I saw of the Ivanhoe story. This is an A&E mini-series, and it is fabulous. Just as I watched the first one for Sam Neill, I tuned into this one for another actor, this time, Valentine Pelka. He's one of those British actors most people have never heard of, but I love love love him. He plays Maurice de Bracy, which delighted me no end, after loving Stuart Wilson in the same role. 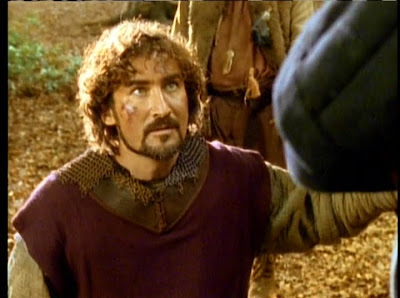 What I found was a rock solid mini-series that was gripping start to finish. It has an unfair advantage over the 1982 version because it is a mini-series. With a running time of 270 minutes, it has room for character growth and depth that the other versions, of course, don't have, and it uses them wisely. This is also a much grittier, more "realistic" filming of the story. The characters look dirty, scroungy, and like they belong in the time period much more than the 1982 version.

The cast? Really, they're unrivaled here. Everyone of them looks and fits their role and turns in above standard performances. No cheese here! Ciarin Hinds gets the plummy Brian de Bois-Guilbert role and he is perfect. I may have loved Sam Neill, but I can't say I truly cared about his Bois-Guilbert. Not so this time, I was much more invested in the character. (But again with the unfair mini-series advantage of having so much more time and space...) Susan Lynch is Rebecca, and she, also, shines. The two play off each other very well, and their scenes are some of the best in the mini-series. James Cosmo plays Cedric, and, as opposed to the complaining version in the 1982 version, this Cedric is fierce, and definitely more action less talk, and definitely no whining. He'd be a scary stern father that you wouldn't want to mess with. (You know, I don't think I've seen James Cosmo in anything but period/fantasy movies. I can't even picture him in modern day clothes!). Stephen Waddington is Ivanhoe, and is more than adequate. Valentine Pelka makes a most excellent de Bracy, even more honorable than Stuart Wilson's, and if I hadn't already been in love with actor and character, this would have cemented it! Christopher Lee is even here, being absolutely terrifying as the rigid head of the Knights Templar. Everyone else fills in their characters nicely. 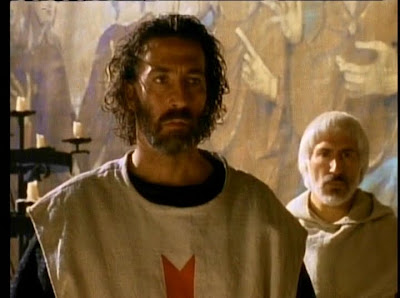 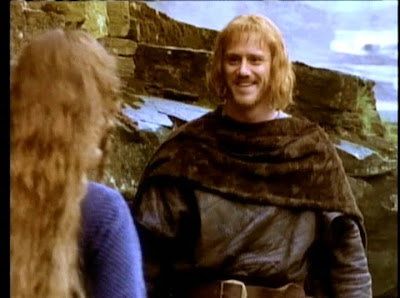 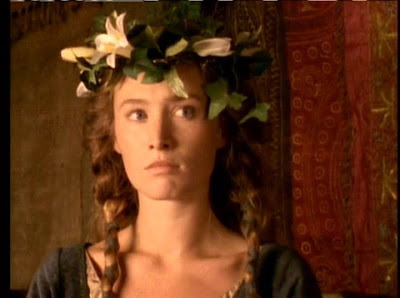 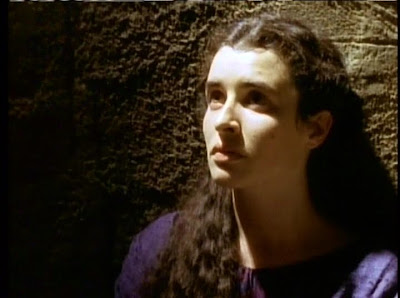 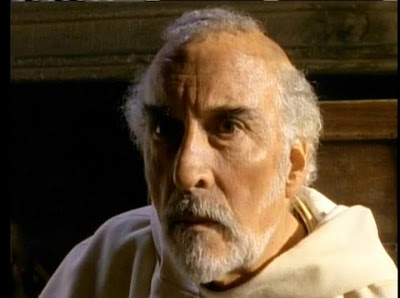 Special credit goes to Sian Phillips who has a brief but absolutely priceless appearance as Queen Eleanor, who meets with her two feuding sons. It might just be my favorite scene in the film. At the very least, it's the one that made me grin the most! Brilliant dialogue as she verbally lashes her two sons. Now this is a powerful and smart Queen! She's so good, you almost wish there was more scenes with her!

The only extremely minor downside is this version does not appear to have had a big budget. There are not hundreds of extras available to storm the castle or fill in the stands for the jousts, or even to populate Prince John's castle, which seems woefully understaffed. This didn't actually bother me because the rest was so good, but I've heard other complaints that it's "too small" in scale. Rubbish. I'll take it just as it is.

So, yes, this is far and away my favorite version of Ivanhoe. It's true to the story, has a great cast, great scenery, and is meaty. A&E got this one right!
Posted by DKoren at 5:18 PM 1 comment:

I recently re-watched three versions of Ivanhoe, and thought I'd write up my thoughts on each here. The three versions are the 1952 Robert Taylor movie, the 1982 TV movie, and the 1997 TV mini-series. I'm going to start with the 1982 version, as that was the first Ivanhoe I saw. After I've written up each individually, I'll do a compare/contrast.

I did not see it when it aired, but caught it several years later on video. I rented it solely for Sam Neill, and fell in love with the story of Ivanhoe, among other things. I grew up on the Robin Hood legend, King Richard, Prince John, the Magna Carta, and that whole time period, so Ivanhoe was a natural for me. I'm just surprised it took me that long before I saw a version. (I read the book shortly thereafter, loved it too.)

This is a star-studded version, with a decent budget, lots of action and vibrant color, but a bit cheesy and/or dated in places (depending on how you want to look at it). Sam Neill plays Sir Brian de Bois-Guilbert, the Knight Templar who falls in love with Rebecca of York, whose played by Olivia Hussey. I loved her in Romeo & Juliet, and she did not disappoint here. James Mason plays her father, Isaac of York. Julian Glover is King Richard, Ronald Pickup is Prince John, Anthony Andrews plays Ivanhoe, John Rhys Davies is Front-de-Boeuf, Michael Hordern Cedric, and Stuart Wilson played Maurice de Bracy. 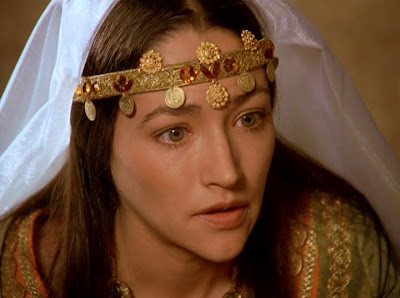 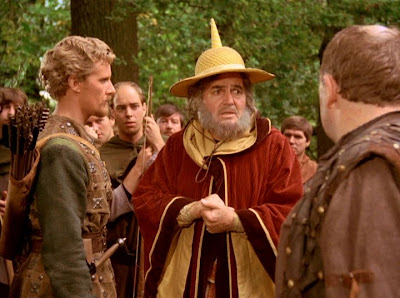 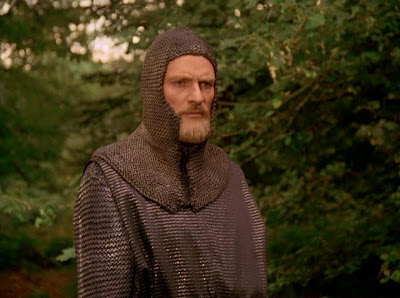 I was surprised by a couple things when I saw this movie. Ivanhoe may be the title character, but he's not the heart of this story. He spends most of it sidelined with injuries he receives in a melee that was unfairly stacked against him. If not for King Richard, he wouldn't have made it out alive! So, while he moans and groans and tries to recover, the other characters take over the story. In particularly, Bois-Guilbert's forbidden love for Rebecca. In many ways, he is the main character. He's also the only character who truly has a character arc, the only one who changes throughout the story. This, naturally, makes him the most interesting character. Well, almost.

I also fell in love with Bois-Guilbert's cohort, Maurice de Bracy (and by extension, the actor that played him, Stuart Wilson. After seeing him in this, I sought him out in other films, and still keep my eye out for him. He has never disappointed me in a role yet.) De Bracy is a mercenary knight, leader of the Free Companions, but he's honorable, and I am always a sucker for honorable men. He also is lovely to watch when he swordfights. He's quick and very graceful, more so than any of the other actors. In an unstaged fight, I think he would have beaten everyone. His fights are too short, but that's what the rewind button is for! LOL! 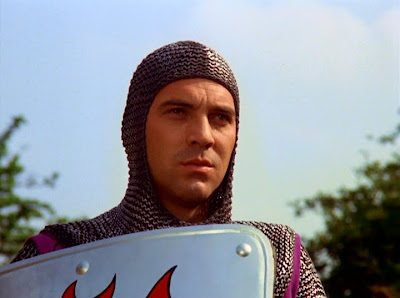 As much as I love Sam Neill, in this particular film, I liked Stuart Wilson more. Not to say there was anything wrong with Sam Neill. He was deliciously angry, smarmy and condescending, and finally frustrated with the whole unrequited love thing. One of the things I love about this version is that he nearly takes Ivanhoe apart in their final showdown. Ivanhoe may have bested him in the joust, but I think even were Ivanhoe fully recovered from his injuries, this particular Bois-Guilbert is the better swordsman, and the victory is clearly in his hands. I loved that, because it made his sacrifice for Rebecca that much more poignant. 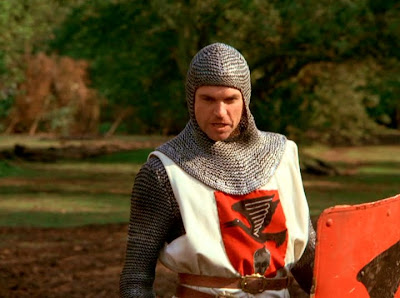 Things I didn't like: Michael Hordern and Lysette Anthony (Rowena). I like both actors in other movies, but they both annoyed me here. Hordern because his Cedric was a whining complainer and a bit of a fool (not the actor's fault, but the script's), and Rowena because her spunk was overridden by her simpering and sad pouting. Hard to explain, but she just annoyed me here. Too bad, because she had some sassy dialogue and showed spirit. The actor playing Ivanhoe was adequate, but his character is overshadowed by the others, so honestly, I didn't pay that much attention to him. 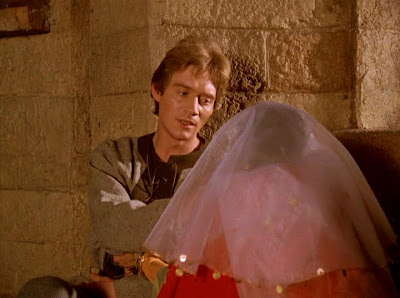