Here are selections from five of my favorite WWII scores. Not my top five, just five of my many favorites. If I did just my top favorite five, I'm afraid the list would be dominated by Goldsmith, but there's plenty of other scores I love and listen to frequently.

4. The Bridge at Remagen - Elmer Bernstein 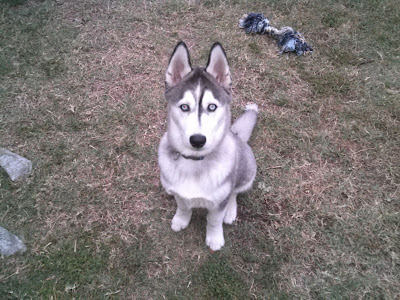 It's nearly June, and Silver continues to grow. He's up to 30 lbs now.  He's had all his vaccinations and we're now out walking the neighborhood daily, sometimes in the evening as well as the morning.  Depends how much energy he has and what the outside temperature is.  It's still nice out right now, but that's going to change as we head into summer.

I received a copy of a newspaper article from Feb 2nd 1945.  It's about my great grandmother receiving the news that two of her sons had died in WWII within 10 days of each other (one in Belgium, one over the Atlantic).  My dad has always told me the story of my great-uncles, but the article had dates and specifics and reactions.  I'm glad this was saved by family to be passed down.

A gentleman in line behind me at Walmart last week had served in the Korean war.  I thanked him for his service and he seemed greatly pleased to be recognized.  He said how cold it had been while he was there. I had to get home to Silver, but I wish I'd been forward enough to ask him if I could take him for coffee and he could tell me any stories he wished to pass on.  I regret not asking him that.

To all our veterans and servicemen and women, past and present, thank you.
Posted by DKoren at 8:48 AM 1 comment: