While there's this Kevin Costner resurgence, I'm going to take advantage of it!  I went and caught a matinee of this one this last weekend and found a different movie from what I was expecting, and I liked that a lot.  This is not a serious action movie, more of a black comedy with some action.  The world's future is not at stake (thank goodness, that's getting oh so very very very old), in fact the mission is quite small in the scheme of things.  The movie is more about Ethan, Costner's character, reconnecting with his daughter and estranged wife. 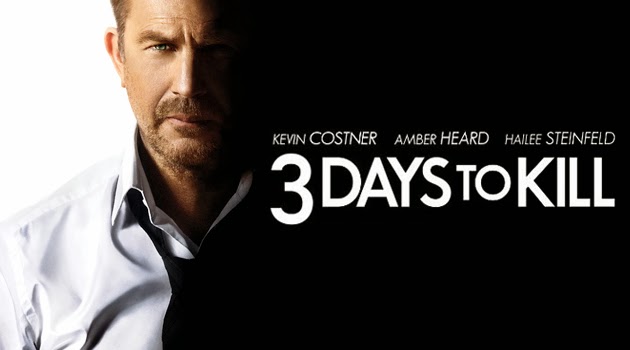 There will be minor spoilers below...

When I walked out, I was thinking of all the things critics could tear apart about this film, but I think they're exactly all the things I liked.  Let's get the one thing I didn't like out of the way: Amber Heard's character.  I like the actress, but her character here and her character's actions made little sense.  At the beginning of the film, we have a whole team to take down the Albino (one of the bad guys).  After that, *poof,* no team, sketchy intel, no backup, no nothing.  just Heard's character ordering Ethan around while driving fast cars.  (Although I liked the last shot of her in the film.) Fortunately, she's a small part of it, and I just shrugged it off and went with it.

The rest I liked a lot.  There's several specific things that really appealed to me.

1.  Credits in the beginning of the movie.  Seriously, wonderful, glorious beginning credits.  I almost applauded.  I can't even name the last movie I saw that had opening credits, but I really really have missed them.

2.  Straight-forward plot.  This might sound weird, but I've gotten quite sick of scripts that over-use plot twists, deception, characters who aren't who them seem, etc. in order to keep the audience guessing.  This happens more in television, but everything seems to have been trying to one-up themselves, so there's been more and more of this, at the expense of the actual story.  This movie was such a relief to watch.  The bad guys were bad guys, the good guys were good guys, no one was not who they claimed to be.  No lies, no deception, just a story moving from point A to point B.

3.  It was a non-stressful movie.  That doesn't mean it wasn't exciting, because it was, and had some great action sequences.  But it wasn't stressful, which is a different thing entirely.  I'm not sure whether this is because the movie did have that comedic edge so the tension was diffused, if it was because I just trusted Kevin Costner, or if it was because the stakes were lower, but whatever it was, I was relaxed the whole film and never once got stressed out or worried.  Since my primary goal when I go to the movies is to escape reality and be entertained, movies that stress me out are NOT escape.  (This is one of many reasons why horror will never be a genre I seek out.)

4.  This movie kind of felt like it was made back in the late 80's/early 90's.  It had a different, more relaxed feel to it, sort of a throwback.  Hard to explain and this probably sounds really weird, but it was, well, rather comforting.  The pacing of this film was also not frenetic as current action films tend to be.  It took its time with the characters and Paris scenery.

5.  Kevin Costner.  Loved him in Jack Ryan: Shadow Recruit, loved him even more here.  I just really enjoyed watching his character the whole movie.  Likeable, competent, and still handsome.  I just dig him to pieces.

I have not gone looking for reviews of this, but it's the type of film that usually gets bashed by critics for being predictable, or cliche, or whatever is the movie flaw of the month.  It's not going to appeal to everyone, but it gave me a genuine good two hours of escape, and despite its flaws, I love it for that.
Posted by DKoren at 9:44 PM 7 comments:

Randomly, I checked youtube for new stuff and found a George Raft movie I hadn't seen.

Midnight Club is a fun little visit into the world of aristocratic jewel thieves in London.  The titular Midnight Club functions as a hide-out/base of operations for Colin Grant (Clive Brook) and his gang.  This movie makes thievery into a gentleman's game, and everyone is oh-so-polite throughout.  He and the rest of his gang have employed a set of doubles (the same actors in some beautiful split screen work that does not look like split screen).  The doubles will sit in plain view at their table in the Midnight Club, setting up a perfect alibi, while the real gang goes out and steals jewels.  Commissioner Hope (Guy Standing) knows Grant is guilty, but he simply can't find a way to prove it.  No matter what he does, who he has watched, Grant's beautiful little setup thwarts the good guys.

Enter George Raft, as Nick Mason, an American detective brought over to infiltrate Grant's gang.  Yes!  He's playing a good guy, which I quite enjoyed.  Of course his job is complicated when he falls for the girl, Iris (Helen Vinson).

The fun of this film is mostly just watching the good guys and bad guys sparring with each other in a verbal cat-and-mouse.  The commissioner knows Grant is guilty, Grant knows he knows it and is delightfully smug in the fact that the commissioner will never figure out his secret.  They remain oh-so-polite and friendly to each other throughout, which is quite refreshing.  There's a wee bit of violence at the end when Grant finally cottons on to the fact that Raft isn't who he says he is, but it's short (too short, lol.) 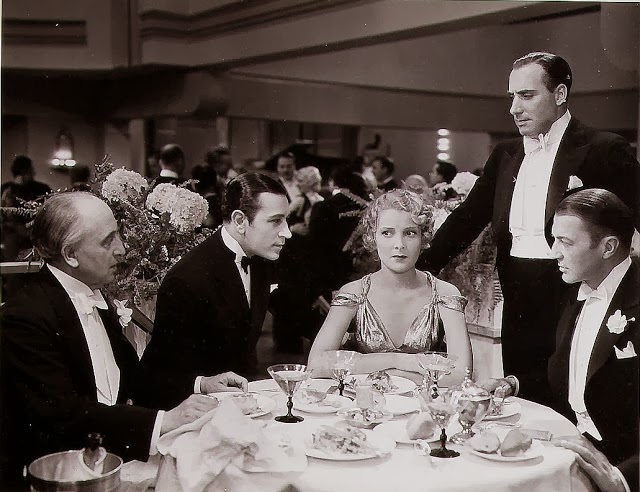 I've been really bad about posting anything lately.  Sorry  about that, just unmotivated and have other things on my mind.  Also have not been watching many movies lately.  Television series, yes, but not many movies.

I actually made it to the theater today to see the new Jack Ryan movie.  I read most of the books when they came out.  The Hunt for Red October, of course, had to do with submarines, so I read that one pretty much right after it hit the bookstores back in the 80's, and before the movie came out.  That hooked me, and I kept reading until Executive Orders.  That was the last Tom Clancy book I read.  Patriot Games and Cardinal of the Kremlin are my favorite of the Jack Ryan books.  The Hunt for Red October is my favorite of the movies made so far.  Absolutely love that movie.  Great cast, great score, great fun.  The filmed version of Patriot Games ranks in the other direction.  Hated that movie.  Still do.  I think it is my least favorite book-to-screen translation of all time, and that's pretty hard to do, particularly when I love the actors.  Although, I will freely admit, as much as I love Harrison Ford, he never worked as Jack Ryan for me.  I saw each of his Jack Ryan movies once in the theater... and have avoided them ever since.  I saw the Sum of all Fears film a few years ago and did like that one.  Not as good as Red October, but better than the Ford films.

Which brings me to the current film.  I found it quite enjoyable, (though nothing particularly special), and am glad I saw it on the big screen. The biggest draw on this one, for me, was the cast.  I am a huge, unabashed Kevin Costner fan. I first saw him in The Untouchables (which is one of the films I saw a jillion times in the theater when it was first released).  That movie introduced me to Kevin Costner and Andy Garcia, with Sean Connery's steady performance as a bonus.  After that, I looked for any movie Costner was in.  And I adored him in this movie. His character, Harper, was likeable, protective, and capable and it was a joy to see Costner both in a role like this and on the big screen again.  He really made the movie for me.   Ahhhh, Kevin Costner, how I've missed you.

Right behind him was Kenneth Branagh, who also directed this movie.  He played the bad guy, and he was nicely creepy and cold and a bit smirky.  He was delightful, and I was equally glad to see him on the big screen again.  I'm probably showing my age that I went to see this movie for Costner and Branagh, not the young guys and gals.

Not to knock Chris Pine.  He was really good and I would definitely watch him as Jack Ryan again.  Liked him far better here than as Kirk (no surprise there, given how much I loathe the Star Trek reboot movies).  He would be my second favorite Ryan behind Alec Baldwin.  Kiera Knightly as Cathy was also very likeable and I have no problems with her either.  They made a great team, and I loved the dinner scene between Branagh and Kiera.

I was also really REALLY delighted to see Mikhail Baryshnikov show up in an uncredited role.   I loved White Nights and always wished he'd done more acting.  He made me grin and grin.

I do have to admit, I sort of didn't pay much attention to the details of the story.  Unusual for me, plot-lover that I am, but really, whenever the characters started talking about secret accounts and plans to crash the dollar... well, I hate economics, hate stock market stuff, and so... yeah, I tuned out.  There were some nice action sequences and fights.  My favorite was the attack on Ryan in the hotel room, which just really worked well for me.

One of the things I loved most about this movie was the fact that the rest of the CIA (and FBI) was not portrayed as stupid just to make Jack Ryan appear smarter.  There are movies and television shows that suffer from this type of bad writing, and it drives me crazy.  This movie, I'm delighted to say, was the opposite.  Harper and his team, the agents back home, etc. are all smart, efficient, and supportive.  They all do their jobs and they're all at the top of their game.  I can't tell you how much I loved that.  Jack Ryan is able to do his job, only because that phenomenal team is behind him feeding him intel and running interference, etc.  What a breath of fresh air!  I loved Harper's whole team in Russia.  They rocked.  And I love how Ryan is stunned and amazed that the CIA could clean up and restore his room after it's destroyed.  And having them smart and quick-thinking did nothing to take away from Ryan's own analytical skills.  It complemented and enhanced it instead.

I'm rather sad to say that Patrick Doyle's score was quite serviceable, but unmemorable.  I was really hoping it would be something I'd want to rush out and buy on CD, as I'm a big fan of his, but alas, no.
Posted by DKoren at 3:34 PM No comments: