This was the first Elvis Presley movie I saw, and it remains my favorite of his films that I’ve seen.  Part of that is because it is not a colorful cheesy musical.  It is black and white, and serious, and shows that Elvis can do more than just sing.  He really can act when given a good script and a good director (Michael Curtiz, in this instance).  Elvis’s character is a singer, so the songs performed in this movie are performed as part of the plot, which works really well. 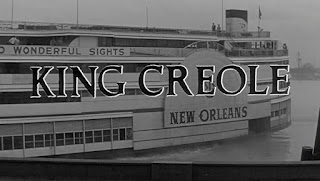 Danny Fisher (Elvis) lives in New Orleans with his sister and widowed father (Dean Jagger).  His dad can’t hold down a job, so Danny and his sister both work to pay the rent, etc.  Danny’s hoping to graduate high school after already being held back a year, but his school teacher flunks him for attitude, and he decides school is not for him.  Danny’s jobs include bussing tables at a joint owned by Maxie Fields, the local crime boss who runs just about everything around.  Maxie’s played by Walter Matthau, and he is delightfully slimy and vicious and powerful.  If he can’t get what he wants by intimidation, he uses blackmail, or any other tool at his disposal to bring everyone and everything to heel. 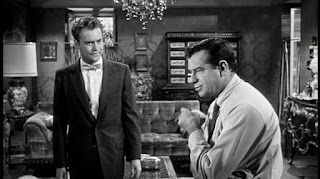 Playing against type, Paul Stewart is Charlie, the owner of a rival nightclub, the King Creole.  I’m used to Paul Stewart playing gangsters and hoods, and I love that here, he’s a good guy.  Honest and fair.  He hires Danny to sing in his club, and the act is a sensation as, of course, Elvis does his magic whenever he performs.  Maxie can’t handle this, and tries to steal Danny away.  When Danny won’t play ball, Maxie uses vile and violent tactics to implicate Danny in a crime, and then blackmails him with it.

Things boil to an inevitable showdown between Danny and Maxie.

Along the way, there are two women who play big roles in Danny’s life throughout the movie: Ronnie (a fantastic Carolyn Jones), and Nellie (Dolores Hart).  The women could not be more opposite.

Ronnie is Maxie’s “girlfriend,” held to him by some unknown blackmail from the past that keeps her obedient to him.  She spends most of her time drunk to numb her life.  Danny brings a spark of freedom and rebellion to her life, and when he stands up to Maxie, she’s finally able to find the strength to do the same thing and break free of his control over her.  She is a sort of femme fatale, except that she’s too much a victim herself. 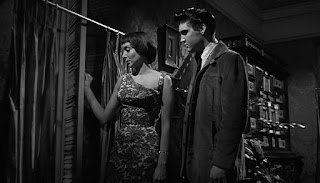 Nellie is a young woman working at a Five and Dime store who falls for Danny the first moment she sees him and she actively pursues him with dreams of a happily ever after with him.

One of the things I like about this movie is that the relationships in this movie are slightly unusual.
Danny and Ronnie are attracted to each other, but a lot of that is because they’re both victims of Maxie’s schemes, they both have hard lives behind them, and both dream of futures that aren’t sordid and full of crime.  Both are singers.  Ronnie’s singing is in her past, Danny’s is in the future.  Danny rescues Ronnie, and Ronnie rescues Danny.  They share a bond.  They are kindred spirits.  One of my favorite moments of the movie is seeing Ronnie at the end of the movie wearing casual comfortable clothes instead of the tight gowns Maxie has her wear, relaxed and natural and happy for the first time since we've met her. 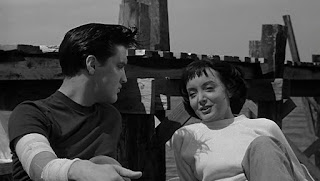 Nellie is the good girl, yet she pursues Danny almost desperately, pushing for a relationship that will lead to marriage.  She’s young and Danny’s young, and one of the things I like is that Danny realizes at the end that he’s not ready for any kind of commitment, that he needs to find himself first.  Nellie tells him she’ll wait, so hopefully she’s learned something along the way too. 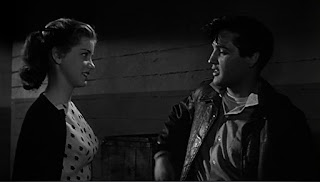 So, what about Vic Morrow?  He has a small but pivotal role as Shark, a local hoodlum with aspirations of being a big hoodlum someday.  He’s got his own little gang, and he continually pushes Maxie to let him work for him.  He gets his wish and becomes Maxie’s errand boy and muscle, which delights him no end.  He takes great pride in obtaining this position.  He’s also a smart cookie.  He’s the one who figures out the best way to blackmail Danny, and Maxie lets him run with the plan, pleased with his initiative.

He’s never less than polite, soft-spoken, his words phrased almost gently even when he’s threatening someone.  He’s deferential to Maxie, almost to a fault.  He thinks he’s a sharp dresser.  He’s clearly trying to stay a classy hoodlum.  And I find it interesting how he quickly he reacts to people's actions.  Early on, Danny gets the drop on him and wins his respect by being faster and stronger than he is.  Shark invites him to join his gang on the spot.  When Danny doesn’t allow Shark to cheat one of the other members of the gang out of their earnings, Shark promptly drops him from the group.  There’s a hundred ways this character could have been played.  Vic’s played some very nasty characters in his career, and while Shark is a bad guy, he’s got such a pleasant, smiling façade, it amuses me no end. 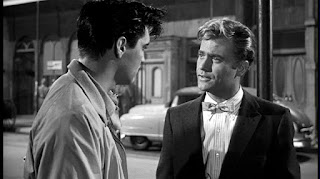 He and Danny finally come to a physical confrontation, a tense knife fight. It's quite something to watch Vic squaring off with Elvis.

The black and white cinematography lends itself well to this movie, giving it that edge of noir feeling, and really, this is a noir movie.  There is some great shots filmed on-location in New Orleans.  It's moody and atmospheric, which suits the story.  Elvis nails the character of Danny, and he's supported by a fabulous cast.

My favorite musical numbers are "Trouble" and the last song of the movie "As Long as I Have You."  Both work great within the plot.  "Trouble" is the song Danny performs when ordered to sing by Maxie, who is trying to prove Ronnie and Danny are liars, that Danny can't sing.  Danny's hopping mad and not only accepts the challenge, but directs the song straight at Maxie without backing down at all.  Ronnie's little smile of triumph is one of her first steps to breaking free of Maxie's control.  It's one of my favorite scenes.  And the latter song closes the movie.  It ties everything up so nicely.  It's the song Ronnie says was her theme song, so Danny singing it as a tribute to her is lovely, but it also represents his return to honest life, with his whole family there to reconcile and move on with their lives, out of Maxie's sleazy shadow. 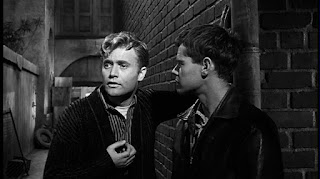 This has been my contribution to the A Tribute to Vic Morrow Blogathon.
Posted by DKoren at 11:56 AM 6 comments:

A Tribute to Vic Morrow: A Blogathon

Hi there - it's time for the Tribute to Vic Morrow blogathon.  This will be running through Sunday.

Leave a comment either on this post or over at my co-host's site, Hamlette's Soliloquy, with the link to your contribution when you've got it posted.  Thanks for joining us!

Hamlette, from Hamlette's Soliloquy:  Why Sgt. Saunders is My Favorite Fictional Character of All Time (And Why You Should, Like, Care)
Eva, from Coffee, from Classics, & Craziness: My Top Five Favorite Saunders-centric Episodes of Combat!
Anna and Irene, from Horseback to Byzantium:  Bonanza: The Avenger
DKoren, from Sidewalk Crossings: King Creole (1958)
Hamlette, from Hamlette's Soliloquy:  The Keys to the Killer (1960)