Hamlette is hosting the We Love Pirates Week.  Check out the link for lots of fun stuff, including a giveaway, some quizzes, and lots of other reviews, etc. 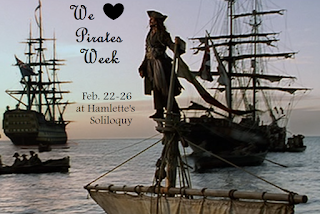 Here are my answers to her tag questions:
1.  What are your favorite pirate movies or books?
Pirates of the Caribbean: Curse of the Black Pearl (2003)
The Adventures of Tin-Tin (2011)
Cutthroat Island (1995)
The Black Swan (1942)
Captain Blood (1935)
2.  Who are your favorite fictional pirates?
1. Red Rackham (Daniel Craig, The Adventures of Tin-Tin, 2011)
2. Captain Jack Sparrow (Johnny Depp, Pirates of the Caribbean: Curse of the Black Pearl, 2003)
3. Morgan Adams (Geena Davis, Cutthroat Island, 1995)
4. Jamie Boy (Tyrone Power, The Black Swan, 1942)
3.  What do you like best about pirate stories? (Themes, costumes, aesthetic, etc.)
Sword fights!  The Ships! The costumes!  Sword fights!  Floggings!  Walking the plank!  Treasure and maps to said treasure.  Did I mention sword fights? 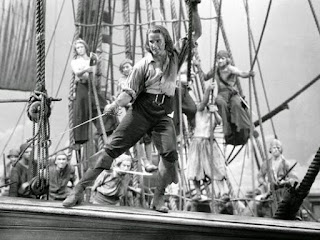 4.  If you were going to play a pirate on the stage or screen, what would your costume look like?
Any of Morgan Adam's outfits.  I love her costumes and I covet those boots.
5.  What pirate ship would you like to serve on?
The Morning Star, Morgan Adam's ship in Cutthroat Island.
6.  Any favorite sea shanties or pirate songs?
Many!   I particularly love "A Rovin'" and "Early in the Morning," which is the Drunken Sailor song.  Also, of course, Yo Ho Yo Ho a Pirate's Life for me!

7.  Have you ever participated in International Talk Like a Pirate Day?
Passingly, with a quick arrrr if somebody reminds me of what day it is.
8.  Would you like to go sailing on a real tall ship?
Only if I was shanghaied.  And I would jump ship in Tahiti or somewhere in the South Pacific first chance I got.  Submarines are my thing.  Not overly fond of being on top of the waves.
9.  Have you ever learned anything about real pirates, or do you tend to stick to the fictional kind?
Yes.  I'll stick with the fictional ones, thank you.
10.  Why is the rum gone?

Silver drank it all. 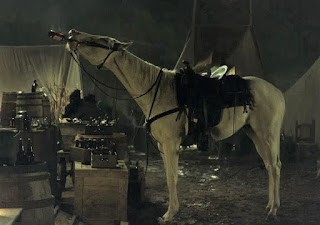