Silver's one year birthday is coming up in just a week.  Wow!  How time flies.  He's doing well, about 55 lbs. now.  He makes me laugh all the time, he's such a big silly dork.  He has started howling occasionally if all the neighborhood dogs are set off by sirens or something and he's outside, except my boy sounds like it's the first time he's ever used his voice or he's got laryngitis!  He has the hoarsest, most unused-sounding voice ever.  It is the funniest thing you've ever heard.  He's starting to blow his coat, so there is white fur going everywhere right now.  Just normal life with a Husky! 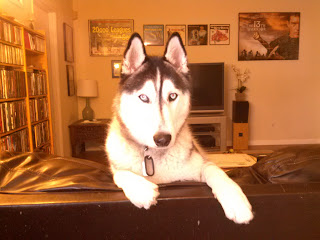 On New Year's Day, my sister and I celebrated the arrival of the new year with our traditional double feature at the theater. This year, it wasn't hard to choose which movies we wanted to see:  Fantastic Beasts and Where to Find Them and Rogue One.  It was my fourth viewing of each of them, so that kind of tells you how much I love these two movies.  They are my favorite movies released in 2016, and it's hard to choose between them (though Rogue One slightly edges Fantastic Beasts out for my number one spot).  And I haven't reviewed either of them here, yet.  Shame on me.  So, here goes with Rogue One.

Wow, I loved this movie.  I can't say that strongly enough.  Didn't expect to, because once again, I liked only parts of the trailer (ie: AT-ATs on the beach, holy smoke amazing).  But, turned out I was worried for nothing because the parts I didn't like in the trailer weren't actually in the movie.  Yay! 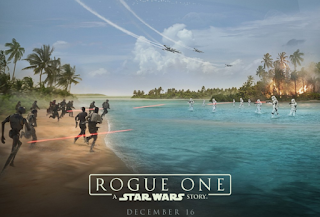 But yeah, I loved this movie.  It will probably end up being my favorite of all the Star Wars films, but we'll see where it settles.

What do I love?  In particular?  Besides all of it?  LOL!

Bodhi, the defecting Imperial pilot is great.  I love all his scenes, love his energy.  My favorite moment of his is when he explains to Jyn what Galen told him about being brave and how he could make things right.

Galen Erso - Mads Mikkelsen is perfect in this role, love him so much as Galen.  And Jyn - just love her too.  Great lead for this movie, and she beautifully binds everything and everyone together.  I admire her immensely. 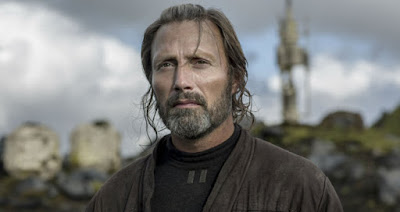 Chirrut and Baze... 2016 had some great best friend pairings, something I always appreciate in a movie.  I don't know if I like these two or Goodnight Robicheaux and Billy Rocks (from Magnificent Seven) better.  They're very similar friendships, with similar ends.  I love their dynamic, love their dialogue, how Baze always looks out for his friend. "I don't need luck.  I have you!" 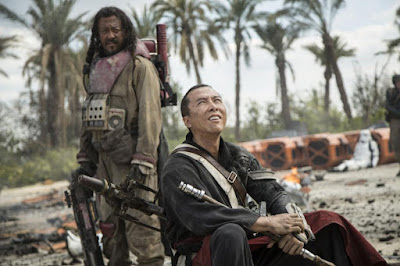 K-2SO - the scene stealer!   Best droid ever.  Funniest dialogue and actions.  "Did you know that wasn't me??"  (My nephew does a perfect imitation of him doing the "whole system goes down" part that just cracks us up, and we have these silly faux-arguments about who gets to have K-2 as their partner, cuz everyone wants him around.)  His death is one of the saddest in the movie.

Which brings me to the two most important characters to me.... Cassian Andor and Director Krennic.

Cassian - A movie always works best for me when there's a "me" character, and holy smoke.  Cassian is the most "me" character in all of the Star Wars movies.  As much as I loved the original trilogy, as influential as it was on me growing up... I never actually related to anyone.  I loved Han the most... but I wasn't anything like him.  He's far too reckless and doesn't think before he acts half the time.  (This is part of why Raiders of the Lost Ark was so important to me when it came out, and why I still go by Indy as a nickname, cuz it gave me "my" Harrison Ford character that Star Wars hadn't provided.)  When the prequels came out, young Obi-Wan came closer.  And then Poe Dameron came closer still... but he's far too trusting and enthusiastic for me to fully relate to him.

Cassian, on the other hand, in his very first scene in this movie, I leaned over to my sister on our first viewing of the film and said, "oh man, he's me!"  So, I finally have my Star Wars character match.  I love Cassian, and I feel him so much.  I love all the things Diego Luna does to bring the role to life, how much he conveys about what his character is feeling/thinking with just a look. I love Chirrut's comment about how he carries his prison around with him.  I love his practicality, and his bitterness, and his hope, determination, and faith despite those things.  I love how he's always thinking. 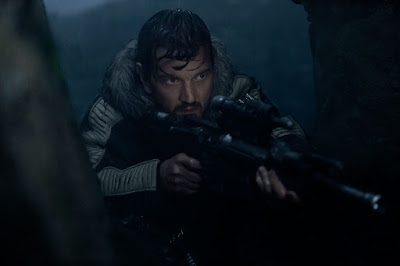 And then there's Krennic - I have a new favorite bad guy!  Oh man, do I love Krennic.  He's got everything going on that I love in my bad guys.  My favorite bad guys are always the hands-on sort, the ones not afraid to get their hands dirty.  That's Krennic.  He's always doing things himself that he could just send someone else to do.  He fetches Galen back in person in the beginning, when he really doesn't have to.  Could have just sent his death troopers.  (And how cool is it that the guy has his own personal private squad of the baddest storm troopers ever, all loyal and taking orders just from him???)  He goes to confront Galen personally again after he finds out Galen betrayed him.  When he finds out someone's accessing the archives on Scarif during the attack, he goes himself, and takes out Cassian.  He has no problems holding his own in a physical confrontation. He's also the only Imperial Officer I've ever seen who goes armed.  No one else (that I recall) ever sported a blaster at his side at all times, and I love it!  He's also confident and stands up for what is his, even when he's being railroaded by Tarkin.  He even has the nerve to tell Vader he's got more pressing things to do than respond to the Dark Lord's summons.  Hah.  Vader may intimidate him, but he's still not afraid to mouth off a bit.  Nearly pays for it too, LOL.  And we can't forget that this guy actually got the Death Star built.  No one else.  Krennic did that.  Dude, hats off to you cuz that's a huge accomplishment.  (And I'd be remiss if I didn't mention the great uniform and snazzy cape that he totally owns as he strides around.)


The first time I saw this, the movie really came together for me when Rogue One departed Yavin on their mission.  The energy level from that point forward absolutely soared.  That last half was unbelievably awesome.  From the beauty of Scarif, to sneaking in, to the Rebels creating diversions, to the fight on the beaches, to Admiral Raddus showing up and everyone else following, to Blue Leader (love him too!) and his squadron going down to defend the ground troops, to everyone having their moments, to how they're successful but at what cost, to watching that star destroyer sheering downwards towards the shield gate, to the Death Star and the Imperial fleet showing up, and that amazing moment with Jyn and Cassian on the beach, to Vader igniting his light saber in the darkness.  WOW!!!!  I can't say any other Star Wars film affected me as much as the last half of Rogue One. 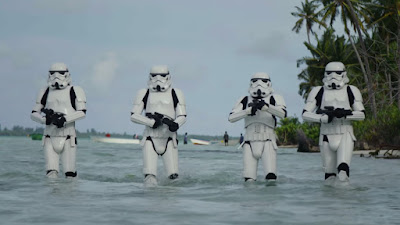 On my subsequent viewings, the first half became just as important as the second, as I noticed all the details I missed the first time.  I'm particularly fond of all of Krennic/Galen's scenes (naturally), and their whole backstory of which we only get glimpses.  I'd watch this movie just for Krennic and Galen.

This fourth viewing was perfection.  Fourth viewings have that tendency.  You're over your initial expectations and reactions, you've seen it again and processed everything.  The fourth viewing ends up being the most relaxed of the viewings, and at the same time, the most exciting.  It flew by.  Felt barely an hour long and ended long before I was ready to leave the theater or that world or those characters, while at the same time being just perfect because I wanted more.  One should always want more.

So, that was rather a messy and rather personal review, but there you have it.  Rogue One rocked my world. 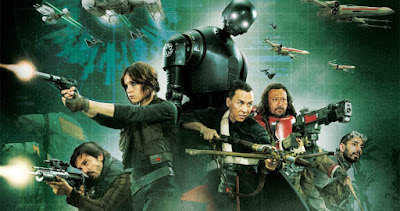