I deliberately avoided this movie in the past for a couple reasons.  One was I was not a James Garner fan, but the big one was that this movie's soundtrack is one of my favorite Jerry Goldsmith scores, and I didn't want to know what was happening in the movie. I write to this score a lot and have my own images, and I didn't want those ruined by reality.  (I have quite a few movies I haven't seen simply because I love the music too much.)

Well, too bad I waited so long, because to my surprise, I really loved this movie.  And I really really loved James Garner.  I've never been that fond of him only because most of what he does seems to be so light-hearted and that's never going to be my go-to.  But, dude, there is nothing light-hearted about James Garner's portrayal of Wyatt Earp.  Serious, cold, quiet, downright grim sometimes, but absolutely wonderful and exactly what I wanted in this movie.  He was MARVELOUS and immediately jumped up to my second favorite cinematic version of Wyatt Earp (Kevin Costner's still got the number one position, but Garner's a very close second).

I was fascinated to find that this movie is directed by John Sturges, who also directed The Gunfight at the OK Corral!  Not often does one director make two movies about the same topic, let alone two such very different movies.  As fond as I am of Gunfight (admittedly, mostly for Kirk Douglas and the theme song), this one has everything Gunfight lacked.  Well, that's not quite right.  More accurately, they're complementary films.  Gunfight deals primarily with the setup and ends on the titular fight.  Hour of the Gun opens with the fight and depicts events that occurred afterwards.

And what an opening!  It might be one of my new favorite Western movie opening scenes.  It jumps right into things with no lead in. There's no talking for the first four minutes, just score.  We just watch each side gather, prepare, and head on into the fight.  It was so unexpectedly tense and perfect, I had to back up the DVD and watch it again as soon as I'd finished the movie.  It also sets the dark tone for what follows.  This film is most definitely not treading any ground -- visually, emotionally, or plotwise -- covered in Gunfight at the OK Corral.  And I like that a lot.

Now, I'll also state right up front, that I'm not looking for an historically accurate movie whenever I watch a Wyatt Earp movie.  I have two biographies of Wyatt Earp on my shelf and I've read them both.  I know what really happened.  I'm more interested in a movie that works on its own merits, and if facts are changed, I couldn't care less as long as the changes are consistent for that movie.  But at the same time, it was quite cool to find a movie that did quite a bit of stuff right.  I think this is the only movie I've seen so far that has Virgil and Morgan not shot on the same night.  That was cool.  (I also understand and appreciate why events get condensed in other versions, cuz having months go by doesn't always keep a plot moving.  I'm a writer; I'm quite okay with that.)

I also quite enjoyed Jason Robards' version of Doc Holliday.  He had lots of little moments I really appreciated, and one big one, where he lays into Wyatt in a magnificent speech.  I may have to pick up this movie on DVD just so I can watch that scene whenever I want.  He's the right Holliday for this movie's tone and events, and a good foil/friend for this particular Wyatt Earp.

Robert Ryan plays Ike Clanton and he also gets a bunch of little moments I loved.  Like in the beginning, he's wearing his holster, and the minute the fight starts, he ducks into a building and ditches it so he can look all innocent a minute late.  Hah!  This movie required a focus for the revenge portion, and it lets Clanton be that focus, which works quite well in context. He is quite the scheming, slimy villain in this.

I'm a sucker for those deliberate, open walks/rides into enemy territory, and this one has multiple versions of that.  It never gets old for me. I think I like Holliday and Wyatt riding through a Mexican village to face Clanton at the end the best of the lot.

But mostly, I simply loved this movie because I loved Garner's Wyatt Earp. Who thought I'd say that about a James Garner character?  But he nails this one. 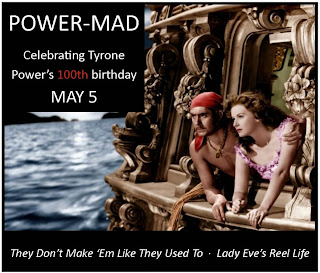 This entry is for the Power-Mad blogathon, celebrating Tyrone Power's 100th birthday!  Check out the link for all kinds of wonderful entries on Tyrone Power.

I opted to write about 1943's Crash Dive.  I'd originally watched this movie back in October of 2005.  At the time, I was in the midst of watching all of Dana Andrews' films.  While I knew Tyrone Power, I hadn't watched that many of his films at that time. So, the first time I watched this movie, I was mostly irritated at how much screen time Power got, as opposed to Andrews.  I have not watched this movie since gaining a big appreciation for Tyrone Power, so I thought it was high time for a re-watch. 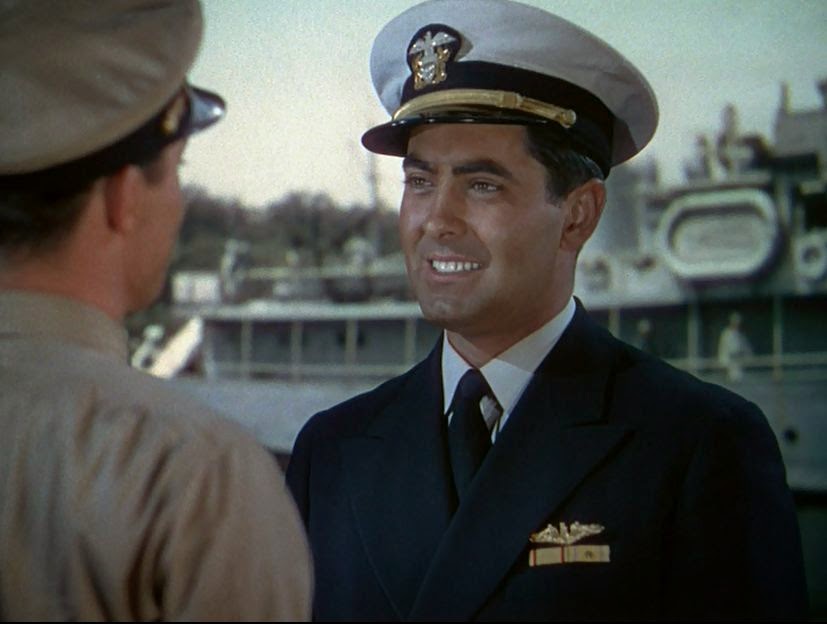 Crash Dive is a WWII submarine movie, that works well enough if you don't think about it too much.  Power plays Lt. Ward Stewart, who gets yanked off his PT boat and returned to submarine duty.  He is assigned as Executive Officer on Dewey Connors' (Dana Andrews) boat, the USS Corsair.  Before they set sail, though, Stewart goes to Washington D.C. on leave and meets, purely by accident, Connors' girlfriend, Jean, played by Anne Baxter.  He has no idea she's dating his new skipper, she's just a very pretty girl he's attracted to, and so the movie heads into love-triangle territory.  The movie spends a large chunk of time ashore, attending to the romance angles of the plot.  The sub heads out on patrol, sinks a German Q-boat.  This sets up the last part of the movie, where the sub heads out to locate and destroy the German supply base that is sending out the Q-boats. 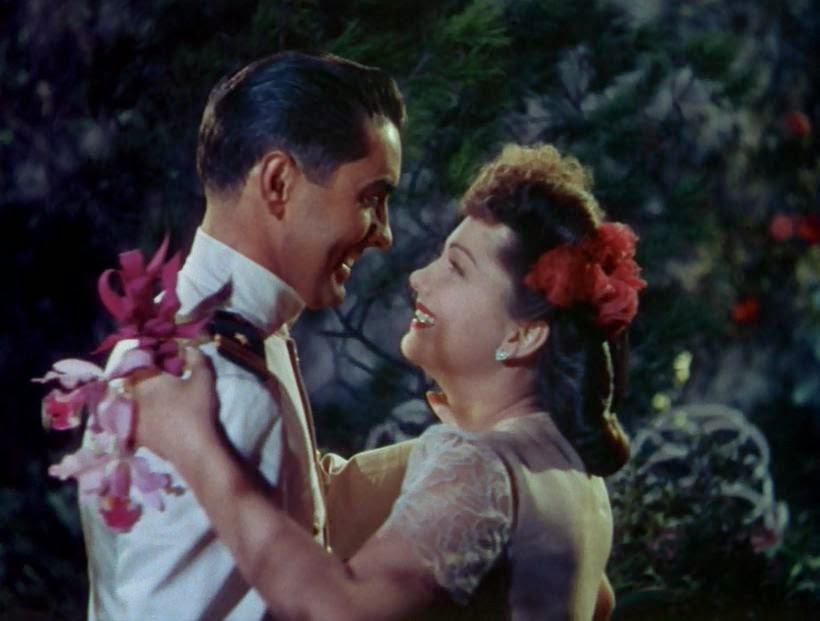 This is a movie where if Ward Stewart was played by anyone other than Tyrone Power, I probably would not like him very much, the way he uses deception to get Anne Baxter to go out on a date with him.  Because she's already seeing Dana Andrews, she tells Stewart multiple times she's not interested, even stands him up on their second date, etc.  He refuses to leave her alone and ends up both helping her without her knowledge, while basically blackmailing her at the same time.  But at the same time, he's got that Tyrone Power smile going on, and I get the feeling he would back off if his scheme didn't work, and he does finally agree to leave her alone after one final date, if that's her wish.  Of course, by that point, she has fallen in love with him.

Back in the day, I was always mad that she chose Tyrone Power over Dana Andrews, but now... well, Tyrone's character pursues her, and Dana sits back waiting for the perfect time, and so this time around, it all worked for me. 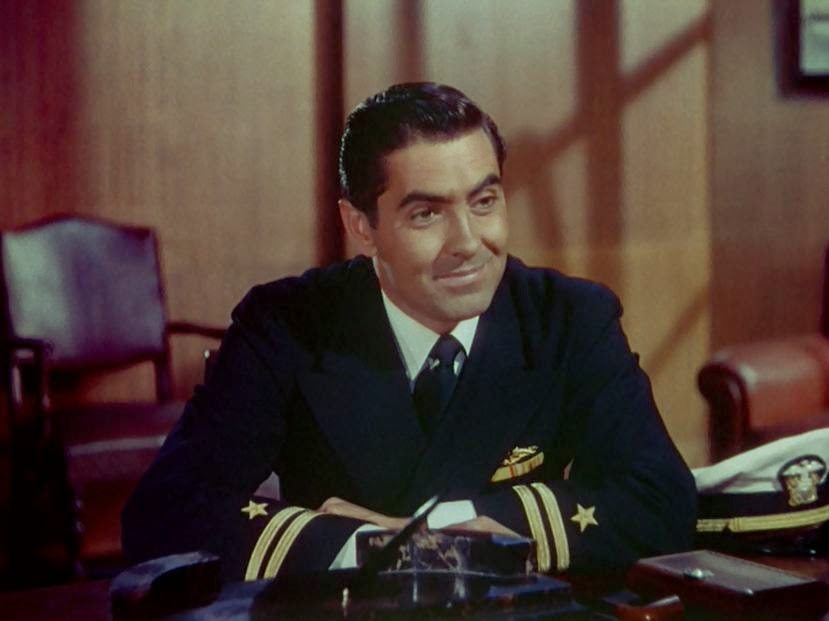 But the best parts of the movie are when the Corsair is at sea.  Its first mission has them locating, then playing hide and seek with the Q-Boat.  This is probably my favorite section of the movie. Submarines are one of my first loves, particularly WWII subs, and I never really tire of watching them at work, no matter the movie.  Both leads each get their fair share of the limelight.  Connors' possum tactics allow them to escape the Q-Boat's depth charge attack.  Then when Connors gets knocked out, Stewart takes over and sinks the Q-Boat. 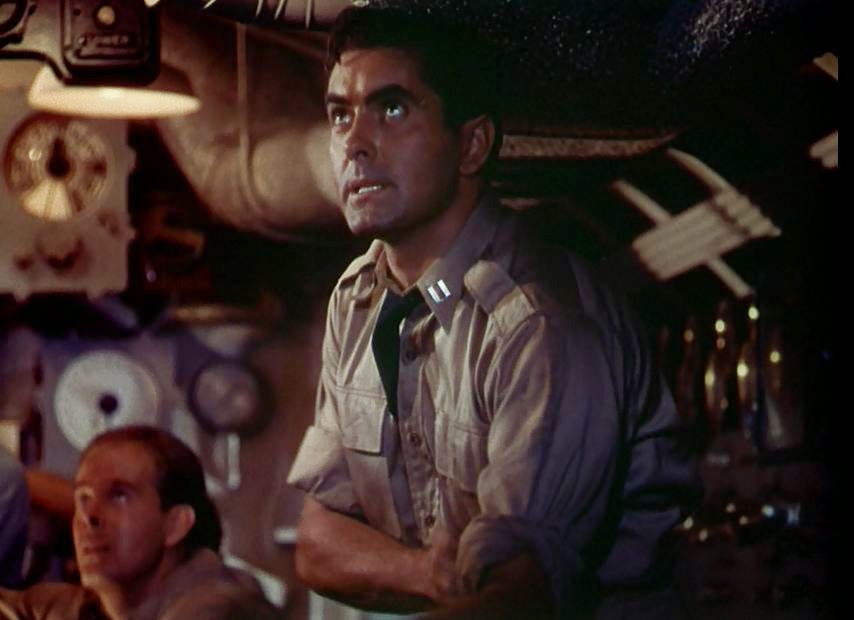 The second big action scene is when the Corsair follows a tanker into the secret German supply base, and the crew goes commando and blows the place to smithereens.  If you ignore the fact that a submarine crew wouldn't be trained for any of that, the ending is quite exciting.  Again, both leads get to shine.  While Stewart leads the commando team ashore, Connors torpedoes the German ships in the harbor.  Mission accomplished, the sub barely escapes the harbor's guns.  The effects are quite good for the time period, and this movie won an Oscar for them.  My favorite part of the finale is when the submarine sneaks into the harbor, which is filled with mines.  I'm a complete sucker for those tense moments when a mine cable audibly drags against the sub, the mine getting tugged closer and closer to the sub's hull, only to slip free at the last moment...

As much as I love Dana Andrews, this movie is really Tyrone Power's.  There are few scenes without him, and it's his charisma that drives the romance subplot.  I also love the friendship that develops between Connors and Stewart, and the two actors seem to have a lot of fun when they're together.  They have a great scene after returning from their first mission where they go to the officer's club to share a giant plate of fruit and vegetables and a pitcher of milk.

This was Power's last film before going into the war. 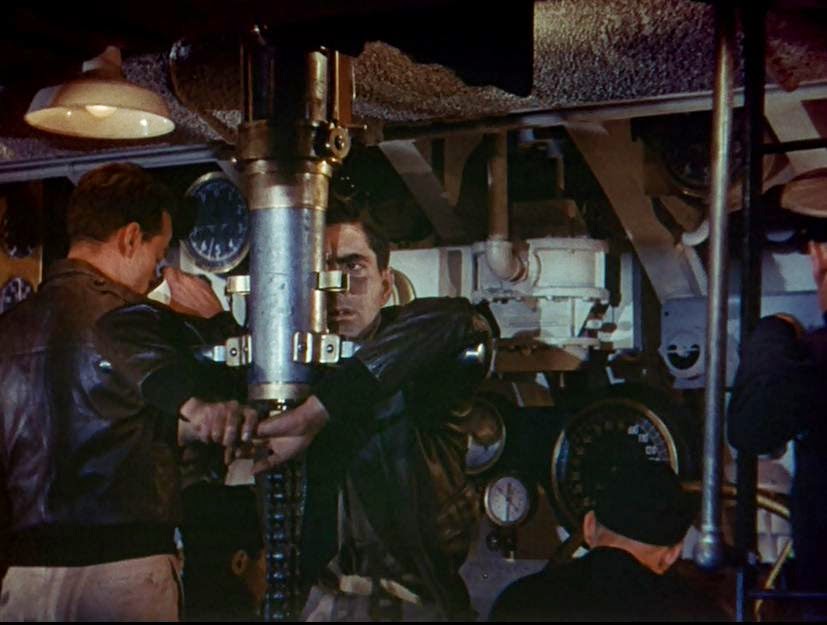 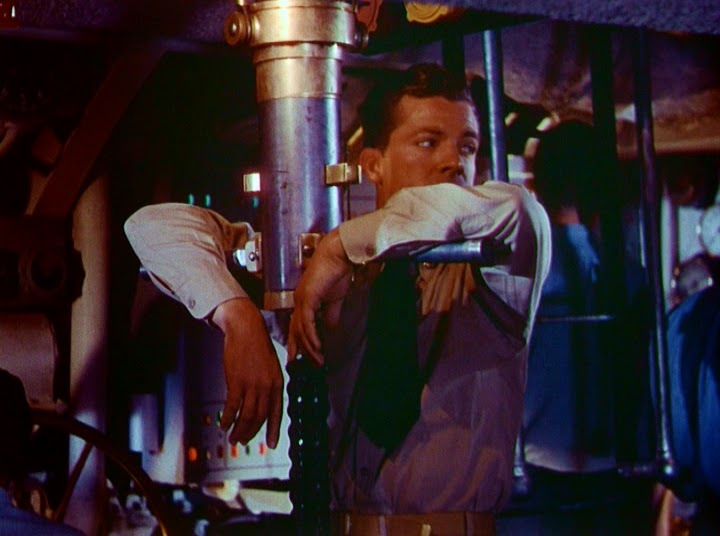 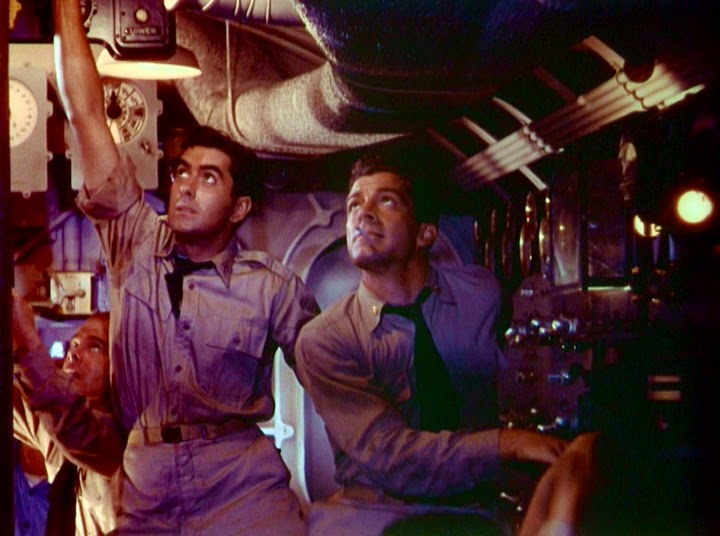 I'm not sure you could have two more handsome men commanding a submarine!