The first half of my Combat! fanfic "Murder's Melody" is up at Fruit Salad! It's so much fun writing these stories. This one I had to get out of my head so I could focus on DTD without mental straying. Unfortunately, it was no sooner edited and out, then I started work on another fanfic story, that I shouldn't be be working on, but it Won't. Go. Away. Made me realize something about what inspires me to write one thing and not another. Why one will latch on and not let go, and others just sit around. It's simple, really. It's emotion. Character emotion. It's got to dovetail/propel/illuminate the plot, and when the combo is just right, I whip through the story fast. DTD was like this, and one of the reasons I was able to write the novel so quickly. This new fanfic story I'm writing is the same. I need to write stories that make me ache (good and bad) and feel strongly with the characters while I write. Now, all my stories have that, it's more a matter of degree. Some have more strong emotion than others.

Which is why it rather fascinated me that Wyrdsmiths posted a link to this, that quite fits with my way of writing/revising, I was just never so logical about stating it this way. It goes with escalations.

Other than that... note to self on additional things that leave me incapable of thought: besides shirtless Aldo, he's not allowed to wear black shirts and a day's worth of scruff either. And that's in B&W. Devastating. Absolutely positively forbidden. I'm still ruined a day later.
Posted by DKoren at 10:21 AM No comments:

Invitation to a Gunfighter 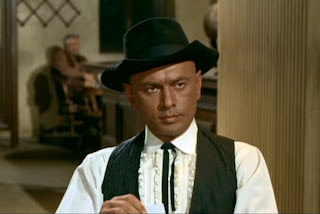 Watched this film tonight. Yul Brynner looks mighty fine. Of course, he always looks mighty fine. Such an intriguing person, Yul Brynner. This movie was okay. Nothing special, nothing bad, just middle of the road (and Bert Freed! Again! Man, he' s popping up in everything lately. Not that I'm complaining, it's just funny). It's a bit uneven, but there's some really nice understated stuff going on here that I appreciated. Leans towards being more of a "thinking" western, than an "action" western. Best scene was Yul teaching the town how to say his character's name. Priceless. And the scene where Yul plays the guitar oh so beautifully. Dig it.

But it got me thinking about Westworld, and the inevitable comparison to The Terminator. I love the first Terminator movie, I really do. But, ya know, Yul did it first, and he's still cooler and scarier at it than Arnold (or subsequent terminators) was. I love just about everything about Westworld, even if it does have that whole 70's thing coloring the film. The whole concept is awesome. I mean I want to go there, badly. And Yul... the best, damned icy-gazed, scary, will-not-stop, gunfighter robot evar. We're not worried about saving mankind here, we're simply worried about staying alive. Simplicity... always the best in fiction.
Posted by DKoren at 7:34 PM No comments:

1955, with Humphrey Bogart and Fredric March. Odd. This is a fine movie with a fine cast -- and I didn't like it. There's absolutely nothing wrong with this movie. It moves well, it's tense, the cast is great (Robert Middleton steals the show). I think I just don't enjoy watching panicky hysterical people very much. Makes me roll my eyes and say "get on with it already," regardless of the fact that that's how people do behave.

I think I also wanted it to be a very different movie. See, they sort of set up this vengeance thing with Bogart and a detective... and it never goes anywhere. And that disappointed me greatly. Of course, half of that is because the detective was played by Arthur Kennedy (a good guy for a change!) and his partner was my favorite Bert Freed. Naturally, I wanted a lot more screen time for the two of them. Naturally, I didn't get it.

Oh well. Good movie, just not my cup of tea. I still can't figure out the bits of the POW novel that are hanging me up. So, time to wait for it to settle out on its own. I was working on fanfic, but as I'm stuck on one lousy all-important scene there too, I switched over to editing the final draft of DTD. Self-imposed deadline for completion is Feb 14th, the day I finished the first draft. A month should be plenty of time, as long as I work diligently every night. Finished chapter 1 tonight. 1554 words eliminated. Moved up the murder and changed the circumstances slightly. Added in some conversation I need for later. I'm pleased with how it's reading, and naturally, I'm already chafing to get to Chapter 4, and Reisher.... Me and my men.
Posted by DKoren at 9:06 PM 2 comments:

with the POW novel. There's something I haven't figured out yet and until I do, it's not working. Spent a bit of time today mulling and considering and rearranging and swearing at the damned construct. I understand what the problem is, I just can't find an answer. Has to do with how Mitchell's life intersects with the bigger picture, with the things that are going on around him. I need to work those out better, but I'm not there yet.

But I did have one spark -- I realized Mitchell is the wild card, and that opened up exciting and unexpected vistas for the end. I still can't quite see, but I'm getting closer.
Posted by DKoren at 3:48 PM No comments: