I know, I know. Enough on George Raft already, but I watched a predictable, cheesy-by-today's-standards, but totally wonderful film on youtube last night. It was so much fun I just have to write about it. And I also have to thank these wonderful strangers from all over the world who take the time to post movies on youtube. It may not be the ideal viewing venue, but as I don't have cable, and these films aren't on DVD, youtube is turning into a veritable treasure trove of classics.

Spawn of the North kind of goes with Joel McCrea's The Silver Horde... more Alaska salmon fishing/canning/romance/violence. What's up with all these salmon fishing movies anyway? LOL!

But this film shot immediately onto the top five list of my personal favorite Raft films. It's George without a perfectly tailored suit in sight (okay, there's one suit, because I think there's some sort of rule about him being required to wear one, but only for one party scene, and it's an old suit). It's George scruffy and a bit unkempt, cocky and smirking, and singing (not a bad voice either). He's not in tough guy mode here (except for a couple moments). And best of all -- it's George swimming and goofing off with a sea lion named Slicker. I mean come on, what's not to love? Then there's also Dorothy Lamour (one of my favorite actresses) as his girlfriend. She's feisty and every bit his match. They're a very good combo.

The film also stars Henry Fonda, unfortunately, who I can really do without. He has the charm of a cud-chewing bovine and I swear, whenever he shows up in a movie with one of my favorite actors, my favorite actor will be in trouble and Henry Fonda will do nothing about it. It's guaranteed. Like The Ox-Bow Incident. Ahem. I'm telling you, Henry Fonda is just plain bad luck for my men.

In the film, Henry's character, Jim, and George's character, Tyler, grew up together. Get them together and they still behave like a couple of 10-year-old kids. It's a crack up, and his silly interplay with George almost made me like Henry Fonda for awhile. They're best friends, but that doesn't stop them from trying to one-up each other where women are concerned. Of course, movies are built of conflict, so the fun and games don't last. Tyler needs money to achieve his dream of owning a schooner and making something of himself. (Money, it really is the root of all evil.) When he can't get any fast the legal way, he goes illegal (natch! it's George!), and he does it by hooking up with a Russian named Red (hah!) who steals salmon from other people's traps and sells them himself. This puts Tyler on the wrong side of the law from Jim, but things would still work out all right, except the other robbed salmon fishermen band together and decide to go vigilante and kill anyone who steps onto their boats. And they do it too. No handing transgressors over to the law, they just murder them. (And gee, Henry Fonda can't stop them any more than he can stop the vigilantes in The Ox-Bow Incident.) Jim tries to warn Tyler from going with Red, but Tyler doesn't listen. There's no guesswork where the movie's going to go from there. And of course, this being George Raft... he redeems himself and comes out the hero in the end. I'm telling you, it's his raison d'être in films, doing the right thing at the eleventh hour.

There were so many great scenes. My absolute favorite: Tyler and Jim and the bet payoff with the egg. Makes me laugh out loud just thinking of it. Every scene with George and Dorothy, but particularly her attempt to stop him from heading out to join Red. Dorothy Lamour's resigned/mortified: "I hope they've got their clothes on" comment. And there's one gruesome scene involving cigarette smoke and what happens when you smoke when you've been shot through the lung that I won't forget anytime soon. Gah! There's also a couple unexpectedly powerful emotional scenes where George shows he's anything but wooden. (He's extremely lively and colorful the entire movie.) There's also some quite intense action scenes on the salmon boats. The two newspaper guys get some choice dialog that also made me laugh aloud. The editor waxes flowery and poetic, and the typesetter guy who, when asked to read the editorial back, renders it into just the important words. Nice writing lesson there, LOL! Actually, all the dialog was well-written. Quite a few zingers in there, and some quiet important stuff too. Man, I love this movie.

And then there's Slicker the sea lion. He steals every scene he's in. And he almost made me cry at not one but two points too. Darn animals. They break your heart. 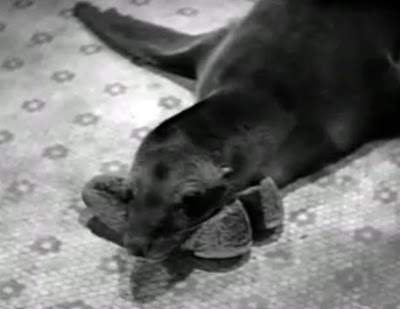 I was noting the other day that while George Raft may be known for playing gangsters, he actually plays very few genuine bad guys. Of the fifteen or so films I've seen in the past few weeks, he was a bad guy in only two (okay, three counting Some Like it Hot, which I haven't seen recently), and those were Scarface and Palmy Days.

In the commentary on the Each Dawn I Die DVD, the speaker mentioned that George apparently had turned down films like High Sierra and Double Indemnity because the characters he would have played had no moral compass. And after the run of films I've seen, that totally rings true. He really does go for the characters that ultimately choose right over wrong. Even when he's on on the wrong side of the law (or especially when he's on the wrong side), he still does what's right and ends up a hero. And I get the feeling that's what he really liked about being in movies, getting to be the hero. There's a little extra twinkle in his eye when he finally does the right thing (usually before he's killed for it), like this is what it's all about.

And that's the very thing that drew me to him in the first place, when I watched Invisible Stripes. I need my characters to change and grow in a movie. They gotta be different people at the end of the film than when they started out, or I just get bored. And I'm the biggest sucker on the planet for a character who's got a redemption arc, and nine times out of ten, George's shadier characters all redeem themselves before the final credits. Really, how could I not fall in love with him? He's an actor tailor-made for me.

Each Dawn I Die is my favorite of his films to date. I loved absolutely everything about this film, and both James Cagney and George Raft are outstanding. It was only the second James Cagney film I'd ever seen, the first being Tribute to a Bad Man. So I watched White Heat and Yankee Doodle Dandy last week to expand my James Cagney viewing experience. White Heat was the exact opposite of a George Raft movie, and I didn't really enjoy it. James Cagney's character is clearly not going to change (nor did I want him to), and neither does the nominal good guy, Edmond O'Brien. The film is just a straight-forward account of a bad guy and how he ultimately gets his. Nothing wrong with that at all, and while I appreciate the movie, and I do love watching Cagney at work, the movie still does nothing for me personally and it won't be one I ever watch again. I need more... which brings me back to George Raft. His movie choices, for better or worse, give me that more I'm looking for. 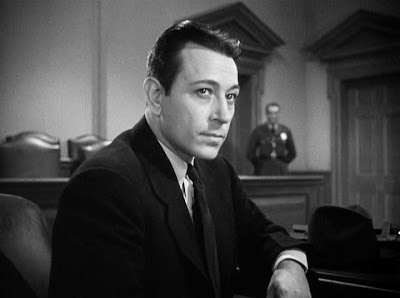 (George Raft as Stacey from Each Dawn I Die)
Posted by DKoren at 7:35 PM 4 comments:

So, it looks like the new scifi/fantasy/horror anthology I have a short story appearing in is available now, ahead of the original May 1st launch date. Amazon has Sha'Daa: Tales of the Apocalypse in stock right now! It's also available direct from the publisher. There's even a nice review already out of the anthology that mentions my story:

"Deborah Koren's tale, "TheTunguska Outpact," is a story worthy of praise. The twenty-two-year-old protagonist not only faces boyfriend/relationship woes but discovers she is the only one who can hold the forces of the Sha'Daa at bay and keep them trapped at the point where they entered our world. With the aid of a shaman and his pack of metal "thunderbirds," the pair stand up to the demons of the Sha'Daa and achieve victory despite overwhelming odds."

Pretty cool! This story was originally written back in 2005, and I had a lot of fun with it.

Two of my good friends also have stories in this anthology, Rob Adams and Jamie K. Schmidt, both fine writers!

My mom grew up on horseback, was riding practically before she could walk, and horses were a big deal in our household. Whenever we watched Westerns -- which was constantly -- she was always pointing out the horses. Her parents worked in the movies, and she would tell us stories of how stunts were done, how horses were trained to fall on cue, etc. And more than anything I wanted horses of my own. A whole ranch, ideally. There was usually at least one horse per movie I wanted. Here are some of the standout ones I still love.

Antares, Aldebaran, Altair, and Rigel... the four horses Judah races in Ben-Hur. Of course, I also want Messala's four black horses, and his chariot. That chariot used to reside at Travel Town in LA. And when I was little, there was absolutely nothing I loved better than visiting it. The trains were great, but I wanted to see that chariot first. It was the coolest movie prop I've ever seen. When I went there a few years back, it was no longer there. Sniff. I believe they said it was moved to a museum (don't remember which one, however). 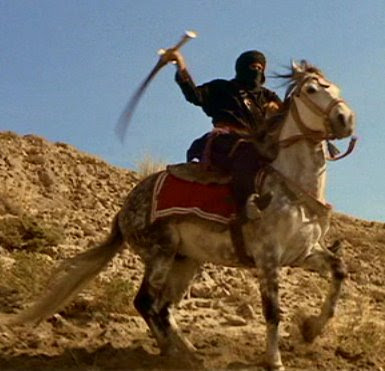 The Raisuli's dappled grey in The Wind and the Lion. Might just be my favorite horse of all time. It's certainly one of the most beautiful. 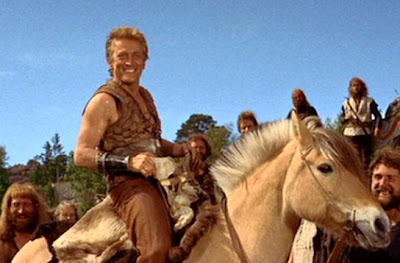 Kirk Douglas's fjord horse from The Vikings. This one goes with my love of all buckskin colored horses -- but he's just got a cooler mane! Hail Ragnar, and hail Ragnar's beard! 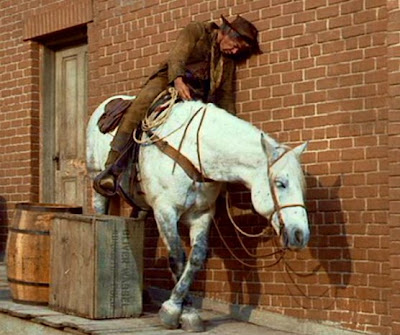 Kid Shelleen's horse from Cat Ballou, just because that is one cool horse. 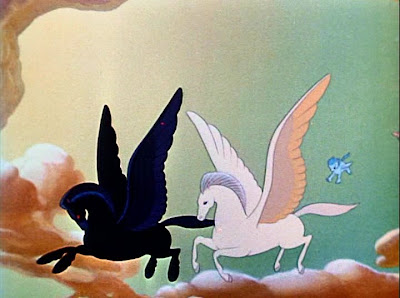 The flying/swimming horses from Walt Disney's Fantasia, because who doesn't want a flying horse?
Posted by DKoren at 9:59 PM 9 comments: