The Hobbit: An Unexpected Journey (2012)

I guess I’ll be saving my Skyfall review for the end of my James Bond marathon.  My sister just picked up Dr. No for me, so… that will get under way shortly!  In the meantime, there has been almost no DVD movie watching going on here.  Just a couple more trips to the theater to see Skyfall again, and today… The Hobbit: An Unexpected Journey.  (In 2D, cuz while I loved Avatar in 3D, that seems to be the only film I like, and I’ve found zero use for 3D elsewhere.)

Spoilers on the Hobbit and the Lord of the Rings in general follow, so stop now if you don't want spoilers! 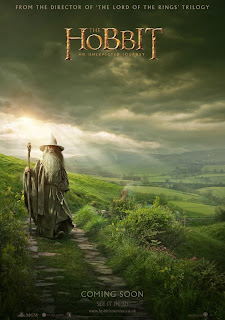 Some personal background… I love the Lord of the Rings trilogy, particularly the first movie, Fellowship of the Ring.  Saw that one a lot.  But then, Boromir (favorite character in the book, favorite character in the movie) gets killed and… well…  I like Two Towers and Return of the King a lot… but I love Fellowship.  It doesn’t help that I got the worst migraine of my entire life from my first Return of the King viewing and barely could convince myself to go back and see that one a second time.  I haven’t seen that one since the theater, either.  It's very hard to watch these films on a small screen.

But the look, the feel, the gorgeous landscapes, the music, the emotion… I love these things about the Lord of the Rings trilogy.  I’ll admit, I got teary a lot during the trilogy, but probably not at the parts where you’d think.  Return of the King was the biggest “culprit” and there must be seven or eight parts where I could not stop from crying.  Like when the beacons of Gondor are lit.  That’s one of the most beautiful sequences I’ve ever seen on film, and the visuals coupled with Howard Shore's music… I bawl.  Return of the King has quite a few of those type of moments.  And I cannot make it through Fellowship without tearing up when the eagle rescues Gandalf from Saruman’s tower.  That giant bird is so beautiful, so awesome… usually, I’m in tears the minute the moth returns, just knowing what's coming.

How does that bear on The Hobbit?  Well, because… it was beautiful and emotional, and I got teary-eyed at quite a few places.  Darn near started sobbing at one point.

So, on to The Hobbit.  I went into this movie with rather low expectations, actually.  I read the book only once, around twenty years ago, where I’ve read Lord of the Rings quite a few times.  Other than a few key scenes, I actually don’t remember what happens.  I intend to keep it that way, as not remembering what happened in the book freed my brain up from doing the constant comparison thing.  Thank goodness.  I have also avoided almost all reviews, another good thing.

I was delighted to find out how wrong I was.  I quite enjoyed the whole thing.  I know this movie has a long running time, but it sure didn’t seem long at all to me.  I liked all the new characters (favorite of the new dwarves?  The archer, of course… Kili.  Why yes, I am so predictable.  Sigh.), I loved seeing all the familiar places and faces.  And most importantly… it felt just like Lord of the Rings, and that’s all I really wanted.  To return to that world and share in an adventure.  Some of my family complained about too much CGI, but that comment seemed odd.  I mean, there was no less CGI in the first trilogy, and with the exception of the wargs (which just looked terrible and fake to me), I thought the CGI was better and more seamless here than in the earlier films.

The negatives: oddly, the movie felt rushed!  I think this is a focus issue with the script.  By the end of Fellowship, you knew all the main characters quite well.  Not so in this one.  By the end I had little knowledge of who the individual dwarves were or even Bilbo.  The defining character moments seemed distinctly lacking.  No "it comes in pints?  I'm getting one!"  No conversations like the one between Aragorn and Boromir after they've reached Galadriel where Boromir talks about his love of Gondor (one of my favorite moments in all of the films).  You feel what those characters felt, and by extension, cared about them.  I didn't bond with the characters in Hobbit and that is unfortunate.  I'm hoping that will be remedied in the next films.

Another negative was the lack of menacing bad guys.  The goblins/trolls/orcs were icky and way too disgusting... but not actually scary.  Gross does not equal scary.  I think the only truly scary bad guy was the Witch King... and he's a familiar face and only in the film for a tiny moment.  And speaking of gross... a little too much of that, was it necessary?

So what did I cry at?  Stuff no one else ever cries at, LOL!  Mostly scenery -- aerial shots of our group trekking through absolutely gorgeous country.  And at the end, because the eagles are back.  I hadn’t remembered that, and all it took was Gandalf whispering to a moth, and I was already tearing up.  Then I had to wait and wait for them to actually arrive, but then they came, in all their swooping glory, and yeah, much waterworks.  They’re just too beautiful.  I cannot NOT cry.

I'm still processing and need to see it one more time after things settle in my mind, but overall, it is still a worthy addition to the Middle Earth films, and I am quite looking forward to the next ones.
Posted by DKoren at 9:23 PM 5 comments:

During December (and probably well into January), I was going to be re-watching all of the James Bond films, in order, including the ones I'm not fond of.  I was going to start on the 1st, except that Netflix has Dr. No on long wait right now.  Grrrr.  They are messing up my grand plan!  The question then becomes, do I start with From Russia with Love and come back to Dr. No when I can get a copy?  Or wait?  Come on, Netflix, it's not like it's an obscure flick!

So, instead, I got Road House (1948), with Richard Widmark, Cornell Wilde, and Ida Lupino.  I had mixed feelings about this film.  I really loved the first half.  The first half of this film great.  Then we had a courtroom scene (yawn), and then the movie lost momentum and tension for me and sort of wandered around until it finally ended.  This does seem to happen with a lot of noir movies of this time period.  I had the same split feelings for They Drive By Night.  First half is great, second half... not so much.  Probably, not coincidentally, has a courtroom.  I know there's a few other films too, but I can't think of them off the top of my head.

The first half of the film is tense, sexy, and intriguing.  I loved Cornell Wilde as the sensible business partner in Richard Widmark's business.  He's the one who manages the finances, looks after Widmark, and in general really keeps the road house of the movie's title running smoothly.  I loved the scene where he meets Ida Lupino's character, a singer from Chicago that Widmark's brought back to sing at the road house.  It was beautifully filmed, with smart dialogue.  Ida Lupino was also great as the singer who both Wilde and Widmark fall for.  And I loved Celeste Holm as the fourth member of the group.  She might be my favorite character in this movie. Of course, this film is very early in Widmark's career, which means his character's not playing with a full deck, and his character's full psychotic rage will come into play.  I much prefer Widmark's later films where he's playing heroes, or morally ambiguous shady characters.  But he sure can play violent-crazy like nobody's business when he wants to.

Unfortunately, the second half of the film lacked all the real tension of the first half and seemed to depend instead on the audience being worried about what Widmark will do.  That isn't enough for me, and where I wasn't sure where the first half was going (I admit, I had not actually read the Netflix DVD sleeve which gives the plot synopsis before watching the movie, so I did not know what it was about or where it was going), the second half was predictable and just made me roll my eyes.  But the first half sure was entertaining!
Posted by DKoren at 3:18 PM 7 comments: