It's been over a month since I last posted.  Mostly, I've been upset over the recent heartbreaking news that the San Diego Opera is being forced to close its doors due to financial trouble after 49 years.  This is their last season.  I've been a season ticket holder for several years now, and they have consistently put on the best operas, with the best casts that I've seen in the Southern California area.  They were always well worth the long drive down for an evening.  This news comes after finding out the LA Opera will not be putting on a single opera I'm interested in attending next season.  After going to a record number of live operas in one season this last year between San Diego and Los Angeles, it looks like the doldrums lie ahead.  Right when there has been an influx of fabulous singers, after a very long dearth of any singers to care about.  At least there's still the Met HD broadcasts, and movie theater broadcasts from the Royal Opera House, etc.  Those will have to tide my family over until we find out what the 2015/16 local opera season holds.

As for movies, I've seen two new, two old in the theater.  I caught Monuments Men and Pompeii.  Really enjoyed both.  Monuments Men was beautifully filmed, and as a fan of the era, it was great to see all the uniforms, vehicles, and European locations on the big screen.  I'm not particularly a fan of any of the actors in it, but they all were great in their roles, and I ended up caring for the characters.  The story was entertaining, non-stressful, and well-worth the time to see it big screen.

Pompeii, on the other hand, was just plain fun.  I went in expecting Romans, gladiator fights, and a volcano bringing massive destruction, and it delivered exactly that and more.  I wasn't expecting Keifer Sutherland to turn up as a nasty, vile Roman senator (I hadn't read the credits beforehand), and he looked like he was having loads of fun in his role as a bad guy.  Adewale Akinnuoye-Agbaje played my favorite character in the movie, Atticus, a gladiator with only one fight to go before he earns his freedom.  He was great.  The rest, as, as I said, fun.  Lots of destruction, lots of fights, no pretensions, and I even got a chariot chase!  I'd probably see both these in the theater again, if there weren't so many other movies coming out. 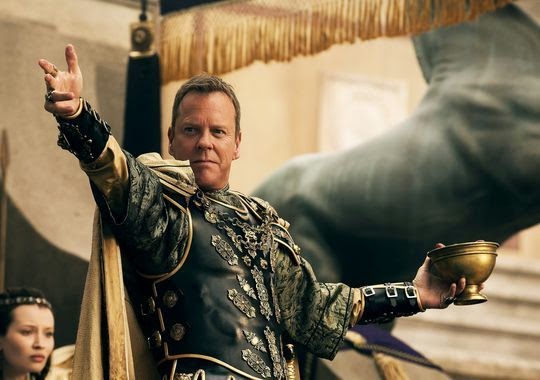 I also caught The Great Escape on the big screen.  Sadly, the quality of this viewing was pretty terrible.  I took this in at the Phoenix Big Cinemas, where I've been catching most of the big screen classic viewings lately.  This one was very dark, washed out, colorless from the very opening through the end.  Ugh.  One of the things I love most about this movie is how green the grass is when Steve McQueen is fleeing on his motorcycle, and how blue the sky is.  And the scenery when James Garner is trying to pilot his plane to safety... Alas, I had to go home and put my own DVD on to get a glimpse of better color.  Very disappointing.  But despite that, it is still The Great Escape, and you just can't go wrong with the this movie.  It's one of my favorite WWII movies, and I've seen it many times on television or DVD.  I never tire of it.  The cast is perfect, the scenery lovely, and the story is exciting.  To my surprise, quite a few of the other audience members had never seen it, so there were some great reaction comments that made me grin.  That made up a bit for the lack of screening quality. 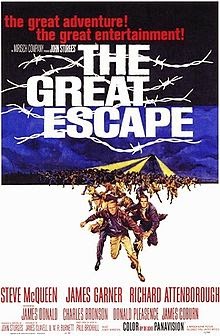 I also had one longstanding question answered.  I have always wondered what Hilts (Steve McQueen) is doing with his sweatshirt collar after he's crashed into the barbed wire at the end.  On the big screen, I could finally see that he's showing the Germans his captain's bars, which are pinned to the inside.  Ah-hah!  So happy to have that mystery answered.  It was always just too small to make out on a television set.

Today, I caught Indiana Jones and the Temple of Doom there.  Much better screening than Great Escape.  No color or brightness issues, etc.  I've been wanting to see this one on the big screen again ever since my last big screen viewing was rudely interrupted and I missed my favorite part.  I have to admit, since we had an earthquake yesterday, I half expected another one today to disrupt things, but nope, the ground stayed quiescent, and the viewing was great.  (Just felt an earthquake here at home... hah!  How's that for funny timing?  Aftershock, I'm sure, much smaller than yesterday's.)

On the soundtrack front, thank goodness for Danny Elfman!  I've been listening pretty much non-stop to his delightful score for Mr. Peabody & Sherman.  (He continues to deliver quality scores, movie after movie, in a world now dominated by generic, unmemorable, wall-of-sound action scores.  My favorite score of 2013 (Epic) was also his.
Posted by DKoren at 2:50 PM 7 comments: