So, I started reading Norman Mailer's "The Naked and the Dead" about a month ago. And I'm not even halfway done. I was starting to think maybe I'm getting old, eyes not working the same, patience thresholds changing, but then I buzzed through Webmage and Cybermancy by Kelly McCullough in two days. And I just flew through Elizabeth Bear's Hammered. I just can't read "Naked and the Dead" fast. If I make it through a whole chapter, that's an accomplishment. The funny thing is, I'm really enjoying it. I like this book a lot. I simply cannot read it fast. I'm not quite sure why that is, either. The words don't feel any denser, but it takes me longer to read a sentence, to process it and move on. And, sure, the plot's slow, but that's because it's exploring the men themselves. I love that. But ten or twelve pages and I need out. So, I try to read a few pages every day, and I content myself with that, intersplicing it with the quicker reads to keep my sanity.
Posted by DKoren at 7:53 AM 1 comment: 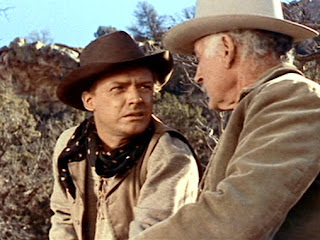 Okay, I've always liked Arthur Kennedy. I think the first thing I saw him in was Bend of the River way back in my youth, and I always looked for him after that. And he's at the top of his form in The Man from Laramie.

This was an okay Western. Not particularly great, but not bad either. I like Bend of the River better. Jimmy Stewart is always good, but his character was rather two-dimensional here. The only thing that elevated his role was Jimmy Stewart himself. Not so with Arthur Kennedy. He got the oh-so-lovely complex grey character, the one who wants to do right and tries, but he's got a temper, and he wants things now that he can't ever seem to get the honest way. So he strays a bit to the wrong side and tries to justify it to himself. He tries all the way to the end to make things come out right, and yet he never quite can. I loves loves loves him in this movie! I'd watch it again just for him. (He's also riding the prettiest buckskin.)

It made me realize yet again how important motivations are for me in liking a character (book or film), and how important it is that they stay true to themselves. Add in the layers of complexity and I'm sold.

"It's Christmas, Theo, it's the time for miracles."

Today, I started in on POW rewrites, not necessarily by choice -- wasn't going to work on this one until the new year -- but because the beginning came to me. And I can write words that sing! Boy howdy, after nothing but what feels like forever of bland and mundane, I found the main character's voice today. And rediscovered how much joy writing can be when you're on. 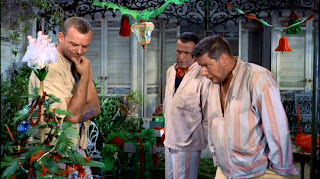 Posted by DKoren at 1:50 PM No comments:

Okay, so found I'm not quite ready to do novel. Still too many unanswered questions, mostly involving that dang setting. So, edited my fanfic story instead until I got stuck at the same dang part I've been stuck on for months. Switched over to a two-year old writing project that I really really want to finish because the end result will be rockingly fun. Unfortunately, there's a reason it's been around for two years. It's hard! I rediscovered just how hard tonight as I threw myself into it again. I may burn my brain out on this one, but it'll be worth it in the end.
Posted by DKoren at 6:32 PM No comments:

Halfway through December. I did not keep up the momentum of nano, but that was because I couldn't get my mind around what happens next in the novel. I'd look at my outline, but nothing would come out when I sat down to write. So, I read a lot. Finished two novels, and am partway through a third.

Really, my brain is rather obsessed with the 50k it already has and editing that. I feel like I need to get it in shape, stop carrying the true story only in my head and have the paper reflect what I learned on the nano run. Been spending a fair amount of time rolling it around without much conscious thought. Letting the images and feelings run, letting the subconscious control the pathing. It has been solidifying nicely. Had one nice realization about one minor but important character. I feel a little surer of the voice I want now. I still can't figure out whether to go with my sort of alt-1940's world with the automobiles and suits and modern conveniences, or switch it into something more classically magic-oriented. I lean towards the former, because that's how the story was conceived. But that doesn't mean it serves the story. It just means I like it. And the world-building of that alt-1940's is a bear and brings some potential reader baggage I want to avoid. But... ? When the right setting gives me a zing, I know it'll be time to write.

The rest, as always, is a matter of sitting down and doing.
Posted by DKoren at 7:04 AM No comments: