Having enjoyed the first two Expendables movies, of course I had to see the third.  And I loved it.  I'm not sure if I like 2 or 3 better.  Both have things I like about them. 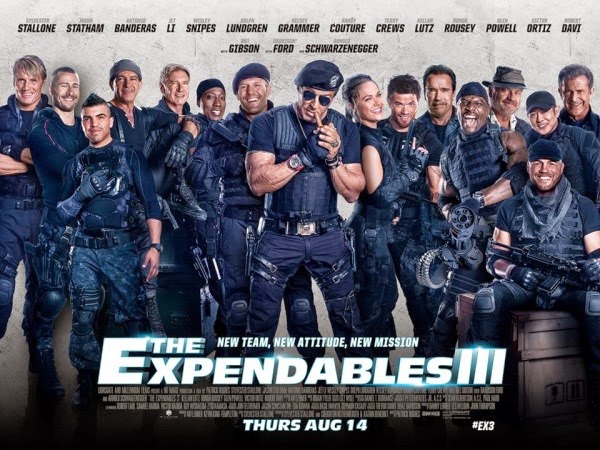 The biggest flaw for me in the third one is that Barney Ross (Sylvester Stallone) recruits some new Expendables to take on a mission.  It's all in an effort to keep his friends alive, which is a cool plot point and all, except for one thing.  I don't go to an Expendables movie to see newcomers.  I mean, duh?  I'm here to spend time with the actors I grew up with, as the first two movies have set them up:  to be smart asses while taking out scores of bad guys and blowing things up.  So I was a bit meh for awhile... but then turns out, that time with the young set actually pays off, when the big finale kicks things back into high gear.  And I actually found myself liking the newcomers... couldn't tell you the characters' names, except for Luna, but none of them were annoying, they did snazzy things, and they could hold their own.  I particularly enjoyed how (spoilers!!) they throw out Stallone's plan and re-engineer the capture of the bad guy with the use of high tech gear instead of brute force -- and it gets pulled off flawlessly.  That was cool.  The movie doesn't put them there to show they're amateurs, just that they're the new generation and have a different way of going about things.  It's a nice contrast to how the original Expendables team attacks head-first, and a dead-on reminder of how the world has changed from 1985 to current.

Mel Gibson is the bad guy this go around, playing a former Expendables, now an arms dealer wanted for war crimes.  He is perfect in the role, and he pretty much stole all his scenes.  "If you want something done right..."  I loved the final showdown between him and Stallone, how it wasn't dragged out forever, and I like how the fight ended (and it was different enough from the Van Damme fight in 2 to keep me happy).

But the best part of this movie, hands down, is Antonio Banderas as Galgo.  I haven't laughed so frequently and so loudly in what feels like forever.  His character was so unexpectedly hilarious. It is entirely possible I laughed every single time he opened his mouth.  Not joking.  I was not expecting him to be funny, which in turn just made it even funnier.

I was quite pleased with Harrison Ford too.  He seemed to be having a great time in his action scenes, and for the first time in years, he was back to acting like the sassy Harrison Ford I grew up loving.  He also had quite a few lines that made laugh out loud, particularly his inability to understand Jason Statham's character.  At the end, when he says, "I haven't had so much fun in ages," I felt like that was Ford himself talking, not just his character.

As with the last film, Jet Li gets next to no screen time, but it's still fun to see him, even for a few minutes.  I loved Arnold again, and he has a bigger role this time.  Wesley Snipes and Kelsey Grammer were great to have along as well.  All these actors feel like old friends, and I simply enjoy spending time with them.
Posted by DKoren at 4:15 PM 2 comments:

Hamlette of Hamlette's Soliloquy is hosting a Piratical Blogathon on September 19th, which just happens to be International Talk Like a Pirate Day.  There are already a bunch of people signed up to post about pirate movies, books, and pirates in general.  There will be classic pirate films like The Sea Hawk, Captain Blood as well as newer films.  If you're interested in participating, please sail over to Hamlette's blog to sign up.

Posted by DKoren at 9:39 AM No comments:

Richard Boone: A Knight Without Armor in a Savage Land

I've loved Richard Boone since the first time I saw him in Big Jake.  I realize that's a rather odd first-viewing impression, considering he's the bad guy... but none of that mattered.  He just had a certain charisma and presence and strength and power and intelligence that I was instantly attracted to.  It's also hard to find a villain who is a truly worthy adversary for John Wayne, and Richard Boone filled that role with ease.  I always looked for him in movies, but it wasn't until twenty years later that I finally got to see a Have Gun, Will Travel episode.  If I hadn't already loved him, that show would have done it.  The show is so well-written, so tight in its half-hour time slot, and Paladin... well, Paladin is magnificent.  Full of depth and nuance and laughter and anger and deadly competence.  He quotes classics in every other episode, goes to the opera, and helps those in need.  If I was in trouble, I'd wire Paladin, that's for sure.

I've always wanted to know more about him, so I picked up this biography by David Rothel.  It's not a normal biography, in that it doesn't tell the story of his life.  Instead, it's a composite image, composed of facts about his life, quotes and poetry from him, interviews with family and co-workers, and a viewer's guide to his movies and television shows.  The format makes for a very quick read.  The interviews were my favorite part, and I would happily have read more of those.  I liked the ones from his family best, as they were the most informative, but the various people he worked with also provide glimpses into the working man as a nice balance.

And I love him even more after reading this book.  I read a quote somewhere from someone who had said he was a lot like Paladin, and he really is.  Extremely intelligent, loved the arts, painted and wrote, worked hard, played hard, didn't put up with baloney from anyone, and supported his family and friends.  I loved reading about how much he loved children, and the charity work he did for them. 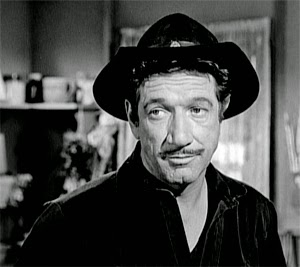 There are only two of his poems included, and I wish there were more... at the same time, I'm happy there aren't, because they are devastating to read.  The two included were ones he had written during WWII, in which he served in the Navy as a aerial gunner.  He suffered severe PTSD after the war, and wouldn't fly in a plane until fifteen years after the war ended.  The poems... There's a quote in the book from actor Jan Merlin that I particularly liked.  He said, "One of my favorite people to work with was Audie Murphy; I worked with him several times.  We never mentioned the war.  He had his European war and I had my Japanese.  What was there to talk about?  If you were in it, you knew about it; if you weren't, then you'd never understand.  It's as simple as that."

And that sums up the power of the poems.  The world of fear and death Richard Boone describes so fiercely and emotionally is one I hope I'll never understand.  But that does not make those poems any less powerful.

I really enjoyed this glimpse into his life (and also into the lives of the people who were interviewed), and I respect his talents as an actor even more. 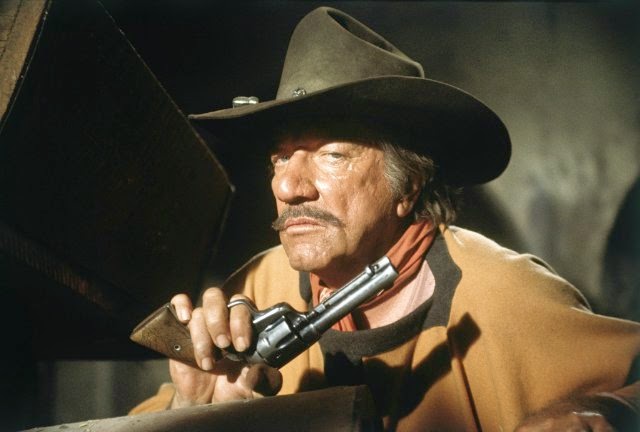