This was a pretty entertaining, but not great, spy movie. On the surface, it sounds like quite a winner. The plot is intriguing. Set in WWII, in neutral Turkey. The Germans aim to break that neutrality and give Germany a chance to take over by convincing Turkey Russia plans to evade. They've cooked themselves up a nice little scheme, complete with a fake invasion plan, photos, maps, etc. that the main German instigator (Sidney Greenstreet) plans to publish in a Turkish newspaper. Standing in the way of the nifty German plot are an American spy (George Raft), and several Russian ones (including Peter Lorre and Brenda Marshall).

The movie starts out promising enough. Raft manages to obtain the photos and plans, but the woman who gives them to him is murdered and Raft framed. He's then kidnapped by Greenstreet's men -- not before hiding the plans, of course. Greenstreet does not remotely play nice in his quest to recover the plans, and when Raft refuses to cooperate, our hero gets kicked down to the cellar, only to be rescued from torture by Peter Lorre, and the race is on to see who can obtain the plans first -- and stay alive while they're at it.

Alas, the second half of the movie isn't as fun as the first, but it's livened up considerably by Peter Lorre and Sidney Greenstreet. How can you go wrong with either? Lorre plays a good guy for once, albeit a devious, tricky spy, who loves his vodka. He's delightful, and his lines and delivery made me laugh outloud more than once. He's definitely worth the price of admission alone. I love when he finally tells Raft the truth, isn't believed, and kind of throws up his hands. And the way he sits crosslegged on top of a table to tell his story. He's just plain fun in this movie! 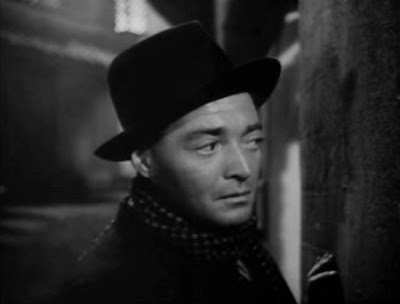 Sidney Greenstreet plays one of those pontificating bad guys who likes to hear himself talk. But, he also smart, one step ahead of the good guys most of the movie, and isn't afraid to do his own dirty work when it comes down to it (though he prefers to do it in comfort). And while he may speechify an awful lot, his dialogue is filled with dry humor and some really nice turns of phrase that also made me grin. 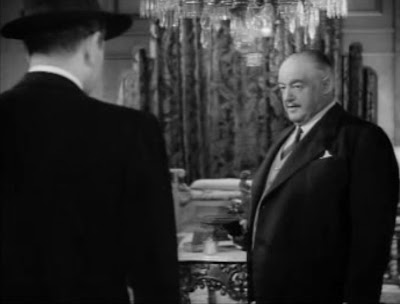 Brenda Marshall plays Peter Lorre's sister, and I hate to say it, but she appears to have hated making this movie or something... she put zero personality into her role. She has no chemistry with Lorre or Raft or even the scenery. She's the weakest link here, her part is unnecessary anyway (token female good guy and tacked on love interest), and I really wish her part had been cut completely. She at least gets to drive the car in the big car chase... but she's pretty expressionless there too. 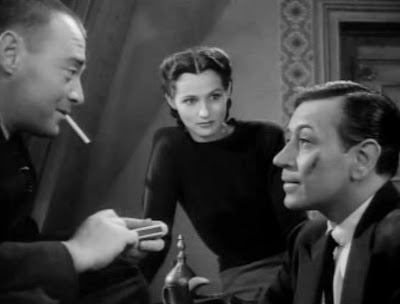 George Raft turns in a mostly average performance, with a few really good moments and a few snappy lines of his own. I still adore the man. I do love when he gets that stubborn set to his jaw and that defiant look in his eye, and I love the back and forth with Peter Lorre he gets to do as both try to play each other to get what they need, and as they alternate who has the drop on the other. Not nearly enough fisticuffs from him, but there's still plenty of running and scrambling around to show off his physical grace. And he sure does know how to wear a hat and coat well. 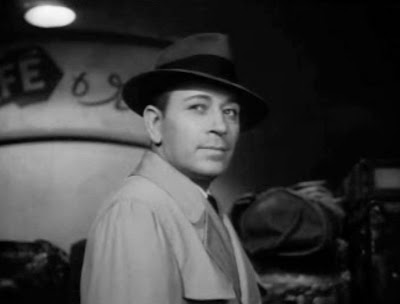 The rest of the supporting cast was excellent, I loved the train sequences (trains in old movies are never a bad thing!), the wild, fish-tailing car chase was exciting, shadows and dark alleys abounded, and I loved the confrontations between good guys and bad guys. There was also a lame epilogue, and a couple of lame deaths, but for the most part, it still kept me solidly entertained in a B-spy movie way. 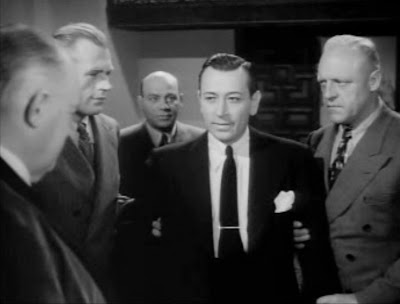 Blowing off the cobwebs

My apologies for the neglect. A combo of vacation, illness, and impending story deadlines has left me with little time for blogging in the last month. I've watched only a couple movies in the past month, and those were re-watches. Weird to go such a long stretch without watching a movie, but I read a lot in there. No fiction, though, oddly. Only biographies on Wyatt Earp and Bat Masterson. I loved reading about both men. Up next is another biography, this one on Travis, Crockett, and Bowie. Really looking forward to it, but man, it's a fat book!

I've also had a birthday, and I find that while I don't need quite glasses yet, I'm distinctly getting more and more farsighted nowadays. Pretty soon my arms won't be long enough, and then I'll need glasses. LOL! No problems with driving or seeing anything far off. Just the up close stuff. I also cannot read for hours and hours like I used to in my youth. My eyes take longer adjust quickly from up close to distant and back again, and reading nowadays tends to leave me with a fair bit of nausea if I try to read for too long. It's unsettling. I just try to make sure I read in bright light and for shorter periods of time. Ahhhh, how the body slowly changes with age.

Most free time lately has been spent racing a deadline for my next anthology submission. Once it's off my plate, there's another one to write... but I should be able to get back to watching old movies. I hope. I'm craving some Dana Andrews and William Holden about now!
Posted by DKoren at 3:26 PM 3 comments: