So a 20 favorite actor meme is now making the rounds, and since I'm about to head out on a business trip, I thought this would be a good way to cheer myself up.

As I did for the 20 fave actresses meme, I'm actually only listing 10. Not that there's a shortage of actors I adore. Quite the contrary, I could ramble on for hours on all my favorite men, but I'd rather keep it focused on the ones at the top, the ones who are little more special than the others. Of course, the word "favorite" can mean so many things, so what I did for this particular meme was list thirty or so actors that I really really loved, then I ranked them accordingly to how loudly I'd whoop and how widely I'd grin if they turned up unexpectedly as a guest star in a "Route 66" ep, then I picked the ten at the top. Seemed a fair enough way to figure out who was important to me. The results surprised me a little, as some I thought for sure would be on this list, when I put 'em to this particular test, I found I didn't care quite as much as I thought I would. And vice versa.

2. Lee Marvin - Yep, Lee Marvin beats out everyone else for second place. Like William Holden, I've loved him for as long as I can remember. Nobody, but nobody can play mean quite like he can, or play a good guy, or do comedy, or sing -- all while keeping that wonderful sexy swagger, and with that wonderful voice. He elevates every movie he's in, and if he's around, he always has my full attention.

3. Dana Andrews - Ah, Dana. It's hard to articulate what he means to me. There are some people who change your life, even if you haven't met them, and he's one of them. He conveys so much with those handsome eyes of his, and he has that smooth voice that never fails to melt me. He gets my full admiration and respect like no one else. More than anything in the world, I wish I could have heard him sing opera. I don't even know which opera roles he studied and sang, which opera was his favorite. His daughter told me that at the end, when he was suffering Alzheimer's and couldn't remember anything else, he was still singing opera in Italian. That makes me cry from both sadness and a strange sort of joy, that he still had that. Because love of opera is something I understand with every fiber of my being.

4. Ralph Meeker - Yeah, he's way higher on the list than I thought he might be, but man oh man, do I love him. I've seen him play pretty much all types of roles, and I like him best when he's playing morally ambivalent characters. He does Grey oh so very well, and as we well know, I'm a huge fan of Grey!

5. Sam Neill - Sam Neill was actually my first true actor crush as an adult. The first time I saw The Hunt for Red October, he completely stole my heart. There's very few movies he's made I haven't seen.

6. Ewan McGregor - He simply can play any role and make you believe in him. I can't think of any current actor I love quite as much as him.

7. Joel McCrea - four things I've learned to appreciate from watching McCrea: 1 - How well some men can wear clothes. I used to think Dana Andrews was the best dressed man in a suit. Nope, I'm afraid McCrea cleanly stole that award away. I almost never pay attention to clothes, or how well a suit or tux actually fits a guy... until McCrea made me notice without even trying. 2 - How good a guy looks after getting dunked in a river. 3 - How important romance is. 4 - And how there's nothing quite as attractive as a truly good man.

8. Aldo Ray - I think he's my all-time physical ideal. If I was ranking actors solely by how lustworthy they were, he gets top slot. Love his brawny build, love his raspy voice, love how easily he laughs, love how often filmmakers get him out of his shirt...

9. Richard Boone - I was a little surprised at first to see him beat out so many of the others to make this list, but really, it's no surprise. I've adored him since the first time I saw Big Jake. Paladin is one of the coolest characters ever put on television, but he'd be nothing if he wasn't played to perfection by Boone. Richard Boone is a great combo of intelligence, honor, swagger, and meanness (when he wants to be). He intimidates the hell out of me, but there's nobody I'd rather have at my side in a confrontation. Like all the guys on this list, I think a movie is better if he's in it.

10. Vic Morrow - A good-looking, fine actor, but more than that... from watching him in films and on television, I've learned so much about how to write a story. That sounds odd, but it's true. There's a lot of acting in writing (at least for me), and Vic Morrow is one of those actors who, for whatever reason, I feel on a visceral level, and the things I've learned about acting from studying how he says his dialog, how he physically carries himself in different roles... he taught me, more than anyone else, how to completely become (and believe in) something I'm not, and that carries into my fiction writing every single day.
Posted by DKoren at 5:17 PM 10 comments:

I've been watching the first disc of the 1957 - 1960 "M Squad" series and, I have to admit, despite the awesomeness of Lee Marvin, it's not keeping my interest. It also made me realize something else about what I need in my entertainment, because why doesn't this show work for me? Very simply: it's too straightforward.

How's that for an odd criticism? Those who know me well, who know my writing, who know my likes and dislikes are probably just nodding and going, "yeah, wanna tell us something new there?" Cop gets case, solves case. Sure there's some twists, people aren't what they seem, people lie and try to lead Frank Ballinger on a merry chase, there's action and shoot outs and some nice fisticuffs... but it hasn't yet engaged me.

I couldn't help comparing "M Squad" to "Peter Gunn," both half hour shows, both made late 50's, both dealing with crime. But "Peter Gunn" sucked me in immediately, particularly the first half of the first season. It wasn't straightforward at all, though on the surface, it's no different from "M Squad": detective takes on case, detective solves case. So what's the difference? "Peter Gunn" swings right away into noir territory and the Land of Grey, where "M Squad" is very black/white so far. It also gives me characters I care about, emotion, and the most important: things at stake for the leads. Peter Gunn, Edie, Mother, and my favorite Lt. Jacoby - they lead lives outside the case that draw me in. They make promises to each other that they can't always keep, or that get interrupted, that make me worry. They make me invest in what happens to them.

And that's what's missing from "M Squad" so far... something at stake. Something that makes me care whether Ballinger succeeds or fails. Something personal. There's nothing that takes it beyond a cop doing his job. Now, really, that's an unfair desire by me for a show like this, because I doubt it was created to be anything other than what it is: a nice straightforward cop show. But that doesn't stop me from being a little disappointed anyway.

On the other hand... Lee Marvin. Watching him brings a grin on my face a mile wide, and really, if he wanted to swagger around reading the phone book, I'm in. So I'll happily keep watching, even if the eps don't quite glue me to the set and maybe, just maybe, it'll develop into something more down the line. 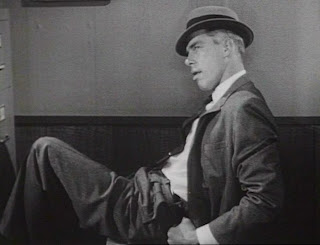 Following Rachel's entry (since she's the one who got me logging my reading habits two years ago), 2008 was not a particularly big reading year for me, though I was pretty much reading steadily throughout.

January
February
March
April
July
August
September
October
My, but October was the month, wasn't it? The first three I read over my birthday weekend, while visiting a friend. All these books were picked for me by my friend, and all these books were fantastic. Favorites were: The Road, a post-apocalyptic setting, very dark, very affecting, very sparse and yet so vivid. It'll stay with me a long time. Catalyst - wow, powerful book. The Foreshadowing - great combo of WWI, family, and what one can do with the ability to see the future.

I'm down with the latest incarnation of illness that keep circling through the family, so I've spent the day either sleeping or on the couch watching two Route 66 eps and Key Largo (cuz I was still in a Humphrey Bogart mood after High Sierra). And while half out of it, I had a scene stuck in my head that I could not, for the life of me, place. It finally came to me.

It was from ffolkes (1979), a highly underrated, wonderful Roger Moore action film that my family used to watch all the time. Which made me realize that this movie gave me my first, rather against-type, impression of Anthony Perkins, and it wasn't as the twitchy, nervous, self-conscious character he often played in other films. No, my first impression of Anthony Perkins was as a cold-blooded, intelligent, scary murderer/hijacker. That's still the image I get when you mention his name and I realized I've never really shaken it. I've learned to accept the nervous version, but I still expect to see that cold calculating look appear any second, no matter who else he's playing.

The only other against-type first impression I can think of off the top of my head is Stewart Granger in The Wild Geese (1978). That was the first thing I saw him in, and I have never, ever been able to see him in anything else without distrusting him and waiting for him to doublecross somebody. I just can't shake that first impression.

And now I'm really in the mood to watch ffolkes, except, alas, I don't own it. Great cast (Roger Moore, Anthony Perkins, James Mason, David Hedison!), cool action, "Cigarette, Kramer?", and cats and more cats! I used to want three little white kittens, just so I could name them Esther, Ruth, and Jennifer.
Posted by DKoren at 4:21 PM 4 comments: