I have a folder on my ipod with a lot of my favorite soundtrack cues.  It's what I listen to at work a lot, or while I'm doing chores, as I usually don't want a single mood or sound.  I set it on random, and just enjoy what comes up.  I put it on early this morning while I fed the cats and dog and did morning chores, and it must have known I had a rough night, as it's given me lots of most excellent revving up cues.

It started with a cue from High Velocity by Jerry Goldsmith, always a great way to start the morning, went to "Bishop's Countdown" from Aliens by James Horner, went to "Traveling," from Island at the Top of the World by Maurice Jarre, To "Claudie Says Yes" from The Last Run, to "Rock Shop" from Robocop by Basil Poledouris, to Shogun, to In Harm's Way, to For Greater Glory... and on.  Of course, there's a reason these cues are in this folder, but some days the shuffle feature is just dead on.

We've had our first snow of the season here, last Friday.  It was lovely, and it was so much fun watching family members experience snow for the first time.  I didn't t really take any pictures, so I'll wait for the next snow.

(Mmmmm, "Hunting the Wolves" from Wolf Totem just came on by James Horner.  This is a very good music morning here)

Nano was churning along steadily, but I had a major revelation last night, and so I'm not continuing with Nano this year. This isn't a bad thing. Quite the contrary.  I was participating really only to 1) get back in a regular writing habit, and 2) clear the air, free the genie, release the kraken.. whatever you want to call it.  And this revelation did that.  That makes this Nano a resounding success for me!  I could not be happier.  Certainly worth the tears and frustration.  And even better -- I figured out what I needed to figure out 20K words and 12 days in, so I don't have to waste another 30K of words that I could better spend on other projects.  Win win win.  And a new plan and attitude going forward.  I am very pleased with this Nano.

("Main Title" from Lonely are the Brave)

As far as movies, my dad has been my movie partner lately for the TCM movie releases on the big screen.  We saw Mr. Smith Goes to Washington and this past weekend, we went and caught Die Hard.  It is great fun getting to see and share these with him.  A local theater is having a Veterans Film Festival today, and we may get to go see Sergeant York this evening.  That's one I've never seen before so hoping we can make the timing work out.  We'll be catching White Christmas next month.

Posted by DKoren at 8:44 AM No comments:

It is November 1st!  Hope everyone had a lovely Halloween. It was pretty fantastic here.  My sister's new home is right by a popular park, and it's where many come to go trick or treating.  There was a fabulous turnout.  Hundreds of kids... we ran out of candy to pass out, had to make a fast grocery store run to pick up more.  Saw tons of adorable costumes.  One of my favorites was the mom and dad dressed as Ron and Hermione from Harry Potter, and their three young boys were all Harry Potter himself.  Three matching little Harry Potters.  It was fantastic.  There were superheroes, pirates, Disney princesses, Incredibles characters, a whole flock of kids in those blow-up T-Rex suits running around (which was hilarious).

My own family went the Star Wars route, specifically Return of the Jedi, with Vader, Luke, and yours truly as a stormtrooper.  Walking around in full-on Star Wars costumes is The Best.  Kids, and more often than not, the adults, would come running up, saying, "It's Darth Vader!"  So fun!  We all had a blast.  And now we know what to expect for next year, so we can have more candy stockpiled to start with. 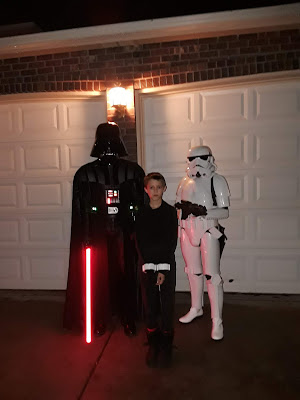 Today, it is raining, and it is the perfect weather to start a novel.  I've got my hot tea, a Danny Elfman score on (Oz, the Great and Powerful), and am 800 words in.

And now for probably the last of the fall color pictures.  It's still going strong here.  I had to check the date of my first post, and that was Sept 10th.  I suspect the last trees will still be turning on Nov 10th, so that's been two wonderful months of amazing color.  These were just taken, you can see the weather's turning towards rain and cold.  No more sun to shine off the leaves.  But the color is still impressive. 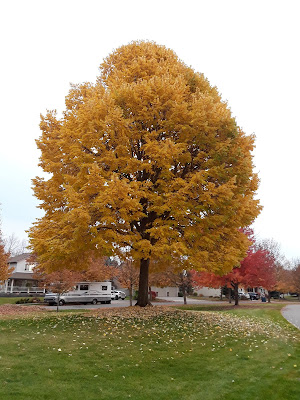 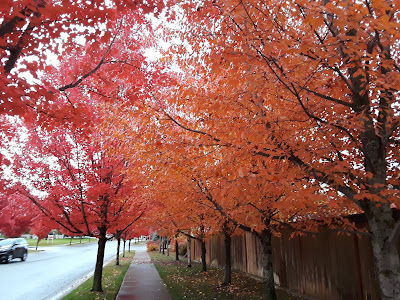 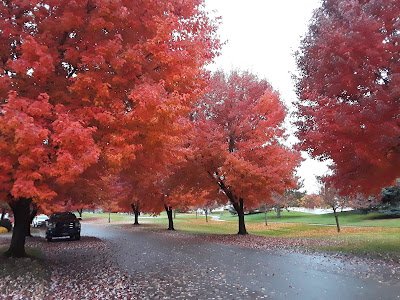 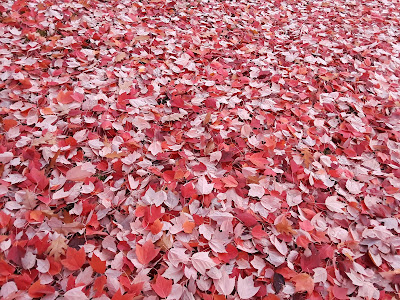 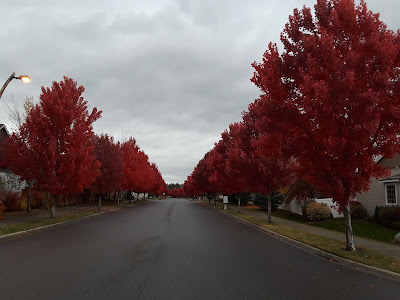 And now, off to write some more.  Still have another 800 words to complete today's word count.
Posted by DKoren at 1:37 PM 2 comments: