A bird in the tree

We have lots of wild green parrots in Southern California.  I've seen big flocks of them flying over in Whittier.  We don't have many out my way, but last year, we had a single green parrot in our neighborhood.  He was beautiful... and he was lonely.  He cried.  Let me tell you, it was heartbreaking.  He would cry and cry and cry, and we felt so badly for him.  (That's an audio cry, not a tears-from-eyes cry. LOL)  He consoled himself by hanging out with a flock of pigeons.  Where they went, he went, but he cried and cried.  And my family made sad faces at each other every time we heard him.  He was very loud, very distinctive, and very forlorn.

Well, earlier this year, he got a girlfriend!  Or just a pal.  I don't know enough about wild green parrots to know male from female yet.  But he stopped crying, and the two are inseparable.  It's still just the two of them, but they can be seen all over our neighborhood.

Including in my apple tree!

Silver and I spooked them the other day when we were coming back from our morning walk.  And this morning, they came after we were back in the house, and I got to watch them.  I took some monumentally lousy pictures with my cell phone through the window, but it was the best I could do without going outside and spooking them.  My sister was leaving for work at the same time, so I quickly called her and she was able to see them from her car, so she took an equally lousy picture from the other direction.  Still, they're way cool.

They perch on their right leg, pick an apple with their left talon, then hold it up so they can eat it.  It explains all the half-eaten apples I have out there!


Amazingly enough, the trees are nearly devoid of apples now, though it make look like there's still a lot.  They're at the end of their run.  I'm happy to let the parrots get some fresh fruit.  I know they love fruit.

And an extra Silver pic, just because. 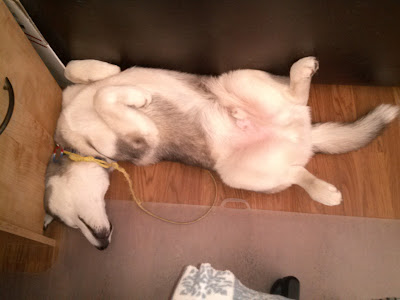