It is a rather unique joy, seeing the same movie multiple times in the theater.  Not on television or on DVD, but on the big screen, during a movie's initial run, where there are no interruptions (hopefully), everything is bigger (and louder) than life, you can't pause it, you can't leave without missing something, and you have to pick and choose what to focus your gaze on, up there on that big screen.

My family did this so much growing up, we had a name for it, and two thresholds.  We call it borching (from a book we had growing up on Boontling, a little local Northern California language, where "to borch" meant to take in an entertainment repeatedly.  Perfect, no?).  Reaching six viewings gave you a "Borch."  Reaching and passing eight gave you a "True Borch."  Why?  Because after eight times, the movie viewing experience changes a bit.

After eight viewings, you're in a whole 'nother ballpark.  Oddly enough, you can start to have "bad" viewings after eight.  "Bad" is a relative term, of course, because no viewing of a movie you've chosen to see this many times is ever bad.  But because you're no longer just watching the movie at this point -- you're catching new things all the time, you're watching what actors are doing off to the side, you're watching what the extras are doing, you're paying attention to set decoration, you're memorizing the music, you're reading stuff on computer monitors and signs, you're counting how many bad guys Iron Man flattens when he bulldozes through them.  You end up going into the movie saying, "I want to make sure I catch X, Y, and Z."  Then you look at something else at that moment and miss it.  Oddly, the more times you see a movie, the more likely it is to miss stuff you're actually watching for.  Until you get to about twelve viewings, in which case you've finally caught just about everything you wanted to see and you relax again.  Now you've finally learned just about every note of music, including which parts are in the movie that aren't on the album (always frustrating, because invariably, one of those non-album moments is one of your favorite bits).  You have large swathes of dialogue memorized without even trying.  After eight viewings, I usually spend each new viewing focused solely on a different character.  It's great fun to watch what the actors are doing things when they're not the main center of attention in a scene with multiple people, but you really can't start seeing that kind of stuff until you've seen it a bunch of times because initially, you don't want to miss something by looking off to the sidelines.

Once the movie leaves the theater, then the mad, delightful urgency to see it as many times as you can slowly fades.  Life becomes normal, boring, ordinary again.  Life shrinks.  You have to be content with memories and dreams (and acquired merchandise).  And you despair of ever finding another film worthy of that much of your thoughts, money, and time.

I'm looking forward to the DVD coming out, and I'll buy it right away, but I doubt I'll watch it for awhile.  I won't be able to bear to see it on the small screen.  It will be too depressing for words.  But at least, for now, I've memorized what it looks like BIG, so I can close my eyes and expand it back to its real size in my mind.

Rogues in Hell is now out in Kindle form.  Trade paperback and other versions to follow in a few days!  This is the next volume of the Heroes in Hell series and includes my latest short story, "A Hatful of Dynamite."  This story continues the adventures of Bat Masterson and Wyatt Earp in the fictional Hell realm known as New Bodie.  Where my first Masterson/Earp story, in the Lawyers in Hell anthology was more about a moral dilemma, "A Hatful of Dynamite" is suspense/action-oriented. 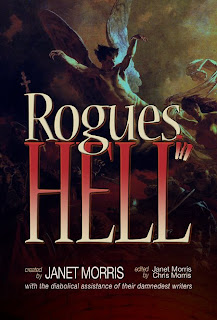 It was with great sadness that I pulled up my blog reading list this morning and saw in the first subject line, Ernest Borgnine (January 24, 1917 - July 8, 2012). Took a half second for that to sink in. Then I burst into tears.  I haven't really stopped crying.

Sometimes it's not the actors we name our favorites who affect us the most.  Sometimes it's the other guys, the ones who star with our favorite actors, the ones without whom, the entire movie would fall apart.  They're so good, you almost take them for granted.  They make any movie they're in better.  Ernest Borgnine is one of those guys.  I've been watching him as long as William Holden, longer perhaps.  And it's not William Holden who has three movies in my top ten films of all time list -- two in my top five.  It's Ernest Borgnine.  Add in his appearances in so many of my other beloved movies, and I'm pretty sure his name would come out on top if you added up how many appearances he makes in movies I love.

I had the privilege of meeting him last year, and I'm sure that memory only adds to be heartbreak now.  He was so full of life, so full of laughter. 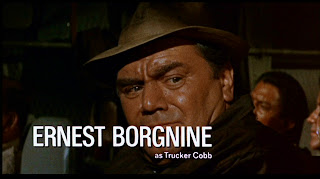 RIP, Mr. Borgnine, and thank you for so many years of amazing, wonderful, awesome performances.  You will be sorely missed.
Posted by DKoren at 8:52 AM 2 comments:

Happy belated Independence Day! I celebrated by going to see The Avengers again.  The film keeps getting better and better with each viewing.  It's been as near a perfect movie as I could ever ask for since the first time I saw it, and, at the moment, I can't actually think of another movie I've seen in the theater since Raiders of the Lost Ark about which I can say the same thing.  I usually have some complaint about plot or pacing or characters or dialogue or music, but not in this one.  It's 2+ hours of sheer pleasure.  And yes, that means I need to re-do my favorite movie list, because this one is in the top ten, if not the top five.

One of the problems with seeing a movie so many times, though, is you get stuck seeing the same previews over and over.  Where the movie may be fantastic, the previews can be downright lousy.  So, it was with great delight that yesterday I found I no longer had to sit through the horrid new Spiderman preview because the movie had finally opened!  Oh, what a relief.  The last few times I've seen Avengers I've just closed my eyes through it.  I was still stuck with the Batman one, though, but at least it's a much better preview.  Given how many movies they keep making about both, I'm clearly in the minority, but those are my two least favorite superheroes, right there.  Zero appeal.  I don't think you could pay me to see either of those movies.

I still have not watched any other movies.  But, where movies disrupt my mood, television (oddly) does not, so I've been watching episodes of Johnny Staccato (1959).  I really love those half hour dramatic television series in the 1950s/60s.  They packed so much in back then!  No wasted time.  So far, I'm thoroughly enjoying this series.  I love John Cassavetes, love the Elmer Bernstein score, love the noir feel of the show.  Reminds me a fair bit of Peter Gunn.  I'll review some of the episodes after I've seen a few more.
Posted by DKoren at 12:14 PM 3 comments: