It is nearly four years past when I intended to write a review for The Iron Mistress.  Thanks to Hamlette, I can now remedy my tardiness with this entry for her Alan Ladd blogathon!  Check out all the other posts for more reading on Ladd and his films. 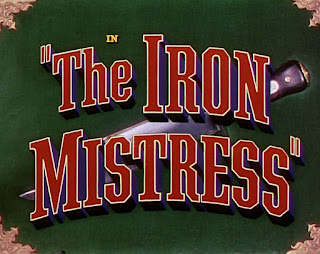 The Iron Mistress was the first Alan Ladd movie I ever saw when I was a young thing, though I didn’t know who he was at the time.  No, what stuck in my head about this movie at that very tender age were two scenes:  Jim Bowie getting ambushed and left for dead, which allows the bad guy to get hold of his famous knife, and the scene where said bad guy starts learning how to throw it.  It was this second scene that stayed with me.  I wanted to learn how to throw knives simply because of that moment.  I spent countless gardening sessions not gardening and throwing trowels and fishtail weeders and garden knives into the ground until they’d stick in just so every time.  And I spent years simply trying to find out which movie that scene came from.  I’d ask my parents, “Remember that movie where the guy’s trying to learn how to throw the knife and it bounces off the wall and he barks at his servant to go bring it back to him...”  No, they didn’t.  I’d ask other people.  No.  No one remembered it.  I was pretty sure it was a movie about Jim Bowie, but that was it.  It wasn’t until the age of the internet that I was finally able to search for it and come up with a likely candidate:  The Iron Mistress.  Except at that point, it wasn’t available to buy or rent.  When it finally came out on DVD, I bought a copy, simply so I could satisfy my curiosity.  I settled in to watch, and lo and behold, an hour and a half into it, there was the scene I’d been waiting all my life to see again, with Anthony Caruso playing the character determined to learn how to throw Bowie's knife left-handed after Bowie injures him.  I grinned like a goon because it was pretty much exactly as my memory had held onto it. 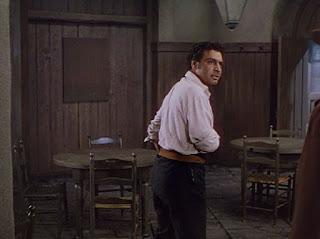 (The first scene, however... the ambush... that one I didn’t remember correctly.  I remembered the hero climbing out of a river onto a grassy bank.  Hm.  That’s not in this movie at all, so I wonder which movie I mixed that up with?  Another movie memory mystery I'll have to solve someday...)

And then I promptly forgot about the movie again, curiosity finally satisfied.  It wasn’t until Hamlette started watching Alan Ladd films that I pulled it off the shelf again.

The Iron Mistress is an uneven film, but still entertaining.  It has some good parts, and some mediocre parts, but no bad parts.  One of my favorite scenes is one of Bowie’s early duels, knife against sword, in a darkened room that is lit occasionally by lightning.  It’s a striking scene.  There’s also the knife duel with Anthony Caruso's character that is really well-done.  I also like the scene where his knife is forged, even if their supposed meteorite isn’t a real iron meteorite at all and looks more like a piece of pumice. The knife itself turns out lovely. 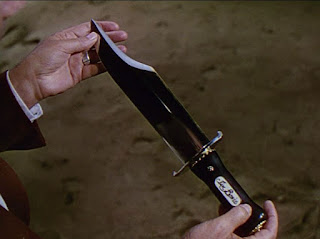 I admit, thanks to The Alamo, Richard Widmark is still my go-to movie-version of Jim Bowie.  I have to consciously set him aside to watch The Iron Mistress or I spend my time doing unfavorable comparisons, and that’s unfair to both actors and both movies.  This is, fortunately, a very different movie, and a very different Bowie, so that gives Alan Ladd a chance to make it his character. 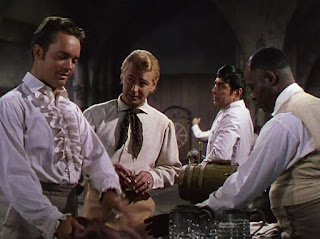 The meandering plot for this one follows Bowie as he goes to New Orleans to sell lumber, ends up meeting society belle Judalon and her brother, decides he likes the finer things life has to offer, embarks his family on land speculation ventures, and ends up in Texas marrying Ursula Veramendi, daughter of the vice governor.  There are duels, horse races, more duels and, of course, the forging of his famous knife. The thread that ties all the disparate pieces together is Bowie's dangerous attraction to the beautiful Judalon and the consequences of that attraction.  He is drawn back to her time and time again.  It's quite satisfying when he finally is able to tell her to get lost and can walk away from her for good.

Alan Ladd always seems too nice and too civilized to pull off the rough toughness of Bowie, but wearing fancy suits, gambling, dueling, and dealing with and being hurt by Judalon’s double-dealing, he does that part of this Bowie very very well.  He's also very good with the human level, with showing his emotions in his eyes and face.  The way he lights up every time he sees her, the disappointment when she betrays him.  I also love how protective he is of Audubon, the famous bird painter, and also of Judalon's brother.  He does best in this movie in the scenes where he's climbing the social ladder, but the fights and duels are engaging as well. 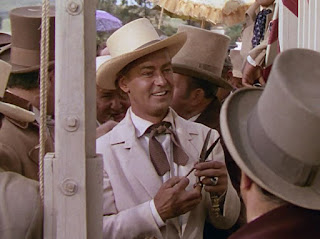 Virginia Mayo excelled at playing women who were beautiful on the outside, but shallow, vain, scheming, and deceitful on the inside.  These characters display just enough vulnerability and flashes of real emotion to hook the men and keep them hoping.  Judalon is prime example.  Bowie falls in love at first sight, but he can’t ultimately offer her the money and social position she wants, and she betrays him repeatedly. 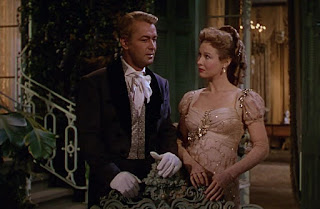 I do find the end of this movie disappointing, in that Bowie and Sturdevant (Anthony Caruso's character) don't have a final reckoning.  Sturdevant has finally mastered throwing the Bowie knife, but we don't get to see him go up against Bowie.  Hmph.  All that work for naught...  Sad. 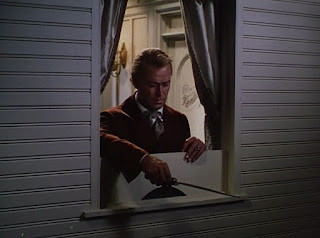 All in all, while not one of my favorites, this remains an entertaining film.
Posted by DKoren at 10:31 AM 4 comments: