While I'm on WWII movies, there's another famous, very popular, award-winning modern WWII movie that I just don't like either. That would be Saving Private Ryan. 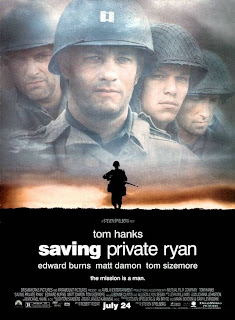 I saw this one originally in the theater when it was released, and I didn't like it then. Gave it another chance last year on DVD, and nope, didn't like it any better. I have several issues with this movie, but the main ones boil down to:

No likable characters. It's a bunch of faceless guys I couldn't even put a name to after the movie ended, let alone relating or caring about. The only guy I liked was Vin Diesel's character, and he got killed early on. I also liked Matt Damon's titular Private Ryan, but he doesn't arrive until nearly the end. Considering how sprawling the movie is, not liking the characters is not a good thing.

More than that, I know every film is colored by the era it was made it, but there is such a modern sensibility to this movie that I just can't buy it. It bugs the crud out of me. It's hard to explain, but this movie has a sticky modern sentimentality to it that doesn't feel right to me. I like the story concept, but the way it's written and executed... it just rubs me the wrong way even thinking about it. And that weird feeling of modernness puts this layer of distance between me and the movie that prevents me from connecting.

The movie has some powerful recreations of D-Day and combat in Normandy, and those are well-done, but that's not enough to make me like this film.

And while we're on very popular modern films, I'll throw one other out there that I should like, but don't. Tombstone. This is another one I saw in the theater, and I admit, I haven't had any desire to see it since, so I haven't. This one should be right up my alley. If there's one thing I like more than WWII movies, it's Westerns. I love the actors in other films, I love the story of Wyatt Earp... and I did not like this version. I'd much rather watch Kevin Costner's Wyatt Earp, or the good ol' Gunfight at the OK corral. I just failed to connect with Tombstone, honestly not sure why. I didn't even like the score while viewing the film, and I love Bruce Broughton's music. However, without the visual images getting in the way, it ended up as one of my favorite Bruce Broughton scores to listen to. I still listen to it all the time. But the movie? No, thanks. I'll take Silverado instead. Now that's an entertaining, satisfying modern Western.
Posted by DKoren at 9:44 AM 7 comments:

My sister and I were talking about certain movies that seem like they should be not only right up our alley, but favorites to boot... but instead, we can't stand them. I thought this week I'd blog about a few of my own "Movies I should like... but don't." Some are old, some are newer.

I think the biggest one on my list is The Bridge on the River Kwai. 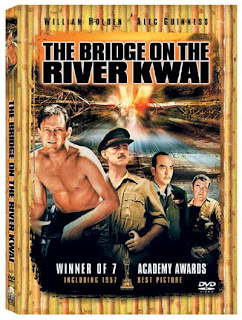 I mean William Holden is my favorite actor! Right there alone, you'd think this would be high on my list, particularly as he spends a large portion of the movie shirtless. Rowr. I also love WWII movies. My favorite genre behind Westerns. And I love Jack Hawkins and James Donald. But I hate this movie. God, how I hate this movie. I can't even watch it for William Holden. The characters, the narrative, the themes, the music... none of them work for me. They just don't push my buttons, and what I'm left with is a gigantic snoozefest of truly gorgeous, panoramic, but endless jungle shots, a bunch of characters I can't stand, doing things I'm supposed to care about, but don't.

There's only one part of this movie I actually enjoy, and that's the bit of dialogue in the middle where they tell William Holden he's going to have to parachute in without any practice jumps. His reaction is great. That's the only part of this film I willingly hold onto. Okay, I also enjoy the bridge explosion and train crash (because I'm shallow that way), but not enough to sit through this movie just to get to that part.

Answers to the voice quiz I posted during the 30-day-meme.

It's a beautiful day!

It could not be more gorgeous outside. Southern California smog is nowhere to be seen, the air is clean and there's a light breeze blowing. The mountains are clearly visible all around my home. Snow still clings to the tops, a nice reminder it's still spring and summer is a ways off yet. I took my dog for a long walk this morning and didn't want to come back. It's one of those days that just begs me to be out in it.

One of the questions in Millie and Kate's brilliantly evil asthmatic survey was about your favorite setting. I'd answered basically anything outdoors. I've been thinking about it since, because of how important this is to me in movies. I crave outdoor beauty, and movies are a place I look for that. Westerns are my favorite film genre, and a big part of that is the scenery. The Alabama Hills, Red Rock Canyon, Arizona, Montana, Utah... As long as there's wide-open spaces and not a city in sight, I couldn't be happier.

It's not just Westerns that boast the grand vistas, but a lot of adventure movies, most fantasy films, etc. One of my childhood favorites was The Island at the Top of the World (1974). I know this movie's effects may be dated by today's standards, but I still love this movie. A search for a lost son leads to a hidden island in the Arctic where a settlement of lost Vikings still live. This film captured my imagination when I was a wee thing, and it still sucks me in, because I still crave places like those shown in the film. From the exquisite matte shots shown in the opening credits: 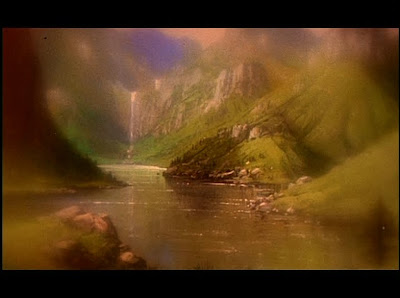 I'm hooked. I want to go there so badly it hurts. I could just pause the dvd there and get lost in that shot. Outdoor beauty, the wonder and joy it brings, is a necessary ingredient to my happiness. I often will recall beautiful movie scenery (whether a real place, a matte shot, or a computer generated image) years after I've seen a movie more than the movie itself, mostly because it evokes such a strong emotional response in me, and those are the feelings that stick with me. 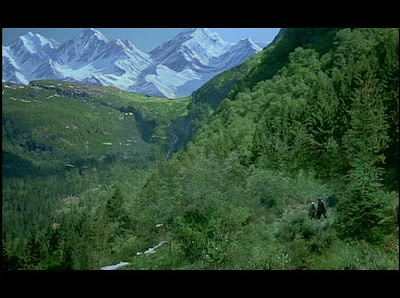 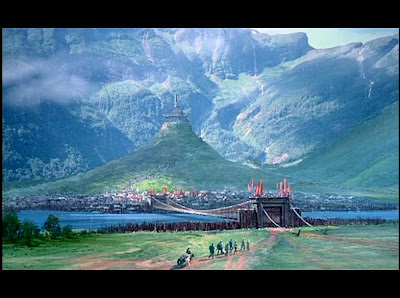 And besides beautiful scenery, a fun plot, Vikings, whales, and volcanoes, The Island at the Top of the World has the Hyperion... the coolest dirigible ever put on film! 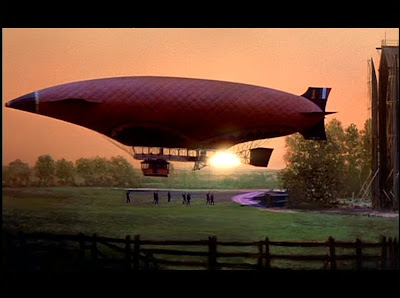 Posted by DKoren at 9:33 AM No comments: