New Year's Eve has almost always been a melancholy night for me.  Year's end makes me moody, and my moods tend to run dark this night.  I won't be watching my old New Year's Eve standard, Reilly: Ace of Spies, at least.  Though I suspect there will be some Sam Neill tonight.

What a year!  For movies, it started with the high of Rogue One, ended with the low of The Last Jedi.  It gave me Slow West and Salvation, two modern Westerns I've probably watched collectively on DVD more than any other movies this year.  I am completely remiss in writing a review on either.  I could not be more delighted that Ben Mendelsohn is in one and Mads Mikkelsen the other, and that both are great movies.

It was a lousy year for new soundtracks, though a good one for new releases of old soundtracks.  I still need to pick up Damnation Alley, which is one I've waited for a long time.  I think of new soundtracks... hm, did I even buy one?  It does not appear so ("It does appear so to Mr. Wallace"... random movie quote, name that movie, LOL!), and that is sad.  Maybe next year will bring some good music.

There was an incredible solar eclipse this year, the most beautiful I've personally seen (my third), and a trip to Idaho that changed my family's lives in so many ways, big and small.  I'm now living here and am very happy, looking forward to seeing what 2018 brings.

So, here we are.  End of a busy, tumultuous, stressful, crazy year.

I'll leave you with this song.  It's one of my favorite discoveries this year (via a Mads Mikkelsen movie, naturally, though this is the happy version that doesn't break my heart.), and it is really is perfect for this winter night.

Movies seen this year in review

This has been an interesting year in movies.  I saw thirteen new movies this year in the theater, and eight older/classic movies.  Of the thirteen new movies, I only bought one on DVD.  One.  That one is The Great Wall, and I have watched the DVD quite a few times.  It's my favorite movie of 2017, and that's pretty sad.  The rest were okay (ie: Wonder Woman, Pirates, Spiderman, Beauty and the Beast), or quite fun (like Thor: Ragnarok and King Arthur), or I-Never-Need-To-See-These-Again (Dunkirk, The Last Jedi).

However, the best new movie I saw in 2017 was Darkest Hour.  That one was sooooooooo very well done and very moving.  I will probably end up up picking it up on DVD next year when it comes out, though it's not the type of movie I normally tend to re-watch.  But Ben Mendelsohn, and the truly outstanding performance by Gary Oldman are worth it.  Lily James and Kirsten Scott Thomas are also great in it.  Highly recommended movie for any who enjoy history, WWII, or dramas. 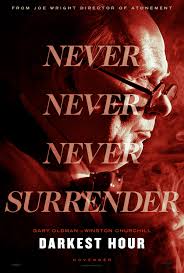 Of the older films I saw in the theater, the highlights were Ben-Hur and Red River.  Ben-Hur I've had the privilege of seeing many times on the big screen, and I will never tire of it.  I got to take my brother-in-law with me this time, and that was delightful.  He had never seen it before, and given the chance to introduce someone to that movie, the big screen is the only way to go.  He was blown away by it.  I got to see Red River at the TCM Film Festival, surrounded by my classic movie loving friends, and it was just an amazing experience all the way around.

I suspect next year will be a much better year for new movies for me.  I'm particularly looking forward to Ready Player One, Avengers Infinity War, Ant-Man and the Wasp, Black Panther, Wreck-It Ralph 2, Tomb Raider, Robin Hood, Expendables 4, and the next Fantastic Beasts movie.  I'd add on the Han Solo movie, but I'm a bit scared of it. 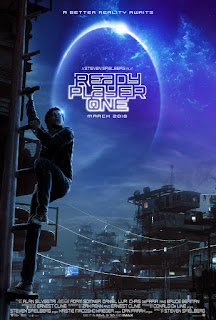 I am probably most really really REALLY looking forward to the first Chaos Walking movie, but it appears I have to wait until 2019 for that one.  Patience, patience.... I'll just have to read the books again to tide me over.
Posted by DKoren at 10:13 AM 6 comments:

Ahhhh!  Snow again!  I have missed snow.  It is delightful to be able to walk Silver in the snow, and/or just let him outside to romp around the backyard.  Neither of us are remotely missing California right now, that's for sure. 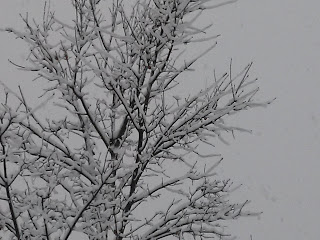 Hamlette tagged me for this one.  Idea is to name a movie that meets the following Marvel Heroes criteria.  Here goes!


Captain America: Name a movie with a "fish out of water" theme.
Overboard (1987)- I'm not particularly a romantic comedy person, but I dearly love this movie.  Goldie Hawn plays a snooty rich girl who loses her memory and gains a new and completely different life, and, for some reason I have yet to figure out, this movie just makes me happy. 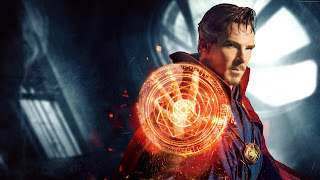 Iron Man: Name a movie about an inventor.
20,000 Leagues Under the Sea (1954) - Captain Nemo invents the beautiful, fantastic Nautilus.

Incredible Hulk: Name a movie with a main character who has two sides to them.
No Way Out (1987) - Lt. Tom Farrell (Kevin Costner) certainly has two sides, and that's part of what makes this twisty movie fun.

Hawkeye: Name a movie that involves archery.
For Your Eyes Only (1981)- Melina Havelock (Carole Bouquet) is one of my favorite Bond girls, and she favors a crossbow. 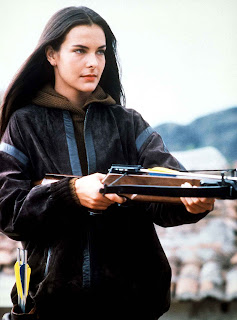 Black Widow: Name a movie about spies.
Ronin (1998) - In fact, I'm way overdue to watch this one.  Wonderful twisty/turny spy movie with Stellan Skarsgard and Jean Reno and Sean Bean.  And, of course, Robert DeNiro in one of the few movies I really love him in.

Black Panther: Name a movie about royalty.
A Royal Affair (2012)  - A movie about Danish royalty for a change, instead of English, with Mads Mikkelsen and Alicia Vikander.  I liked it enough to buy a copy, even if Mads and Alicia break my heart into tiny little pieces.

Vision: Name a movie involving androids or robots.
Going with Forbidden Planet (1956) for this one, because Robby the Robot is the classic robot. 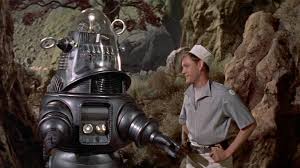 Spider-man: Name a movie about teens.
Stand By Me (1986) - one of the few movies about young people I will happily watch at any time.  River Phoenix and that whole cast are wonderful.  My sister and I still quote it all the time.  "I dropped the comb..."

Ant Man: Name a movie about thieves.
To Catch a Thief (1955).  Because I'm not particularly fond of thieves, but retired thieves trying to clear their name... that I like.  This is probably my favorite Hitchcock movie. 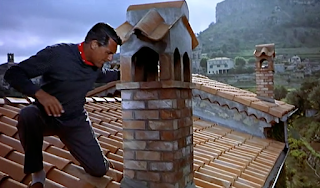 Dr. Strange: Name a movie where a character learns to be a better person.
The Book of Life (2014) - Joachin (voiced by Channing Tatum) has a nice, satisfying arc as he becomes a better person in this one.

Falcon: Name a movie with a great sidekick.
The Great Race (1965) - Peter Falk as Max is the most faithful and funniest sidekick I know.  He is the best.  Very hard to stand your own when you're the sidekick to Jack Lemmon as the dastardly and hilarious Professor Fate, but Max does it handily.

(this is here because one cannot mention The Great Race without thinking of the pie fight, and the pie fight is too good not to share)

Loki: Name a movie with an antagonist/villain who steals the show.
Rogue One (2016).  I think I have a few movies I could answer for this one, but I might as well cut to the chase.  Much as I love Every Single Character in this movie, it's still Krennic who steals every scene he's in for me. 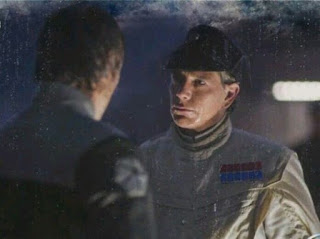 Agent Coulson: Name a movie where an ordinary character faces an extraordinary situation.
The Terminator (1984) - Sarah Connor is pretty much the epitome of ordinary woman thrown into a most extraordinary and dangerous situation.

Peter Quill: Name a movie with a character who is more than they appear to be.
5 Card Stud (1968) - Robert Mitchum's Reverend character certainly is much more than he appears to be.  This is a nifty Western that doesn't get nearly enough attention. 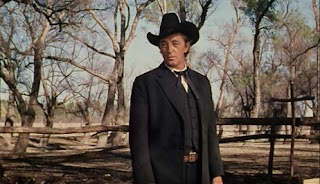 Gamora: Name a movie with a character who changes allegiances.
The Phantom (1996) - This is a superhero movie I think is great fun.  Sala (Catherine Zeta-Jones) is the character who switches sides in this one.

Drax: Name a movie with a physically powerful character.
Conan the Barbarian (1982) - Going with one of the obvious answers for this one... Arnold Schwarzenegger.

Groot: Name a movie with a character who doesn't talk much.
Valhalla Rising (2009) - Mads Mikkelsen's warrior character never says a word.  Being Mads Mikkelsen, he doesn't have to ever speak to communicate.  This is a bizarre, violent, surreal movie that I could only sit through once, though I quite liked the first half. 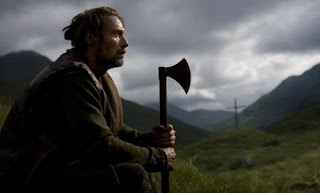 Rocket: Name a movie with a talking animal.
Babe (1995) - I didn't think I'd like this movie, and I resisted even seeing it for years, but was finally shown it, and it was very sweet.  Being an animal movie, it makes me cry repeatedly, and I have no need to see it again, even though it's very good.
Posted by DKoren at 9:44 PM 3 comments: