I recently rewatched this film, when I was in the mood for some Shakespeare. It was the first Shakespeare story I was introduced to, back in the seventh grade, when my school showed it over two afternoons in the auditorium. My memories of that experience are still very strong, mostly because I must have bawled for at least an hour after it ended and my mom picked me up with my best friend. I still remember sitting in the car crying and crying.

I love this movie. Everything about it is note perfect for me. The casting, the gorgeous score by Nino Rota (I really love that music!), the scenery, the costumes. I'm the first to admit romances aren't normally high on my list, but if I'm going to watch one, I'll take this one. And because it was my first exposure to Shakespeare, it has always held a special spot in my heart for me. 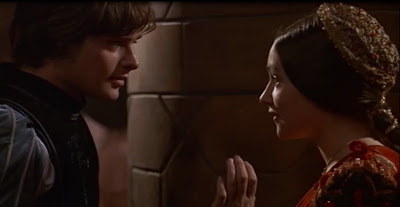 It really struck me on this viewing how the story only works because the protagonists are teenagers. They are such typical teenagers. Instantly passionate over something, instantly angsty, instantly drastic, instantly woe-is-me-it's-the-end-of-the-world the minute something goes wrong. I think I had to get old enough to be around teenagers and witness this behavior to appreciate this about the play.

Leonard Whiting and Olivia Hussey are perfect. She is so beautiful. Really, they're both beautiful people. I remember watching "The Last Days of Pompeii" miniseries because she was in it. They make the perfect couple, and I always believe it when they see each other and fall in love. They sell me on it every time. And I love John McEnery as Mercutio. I remember the first time I saw Paul Bettany (in A Knight's Tale), my first thought was of how much he reminded me of John McEnery. Not a bad thing. LOL! I'm not a particularly big Michael York fan, but he made a great Tybalt. His sword fight with Mercutio is one of the highlights of the film.

And I always feel badly for the Prince, stuck with these two unruly problem families who will not live in peace. I'd have confiscated their lands and banished the lot of them from Verona. All are punished indeed.

And I realized while watching this that there is one song I do know all the lyrics to. Shocking, I know, and probably even odder that it is the song from this film: " What is a Youth." 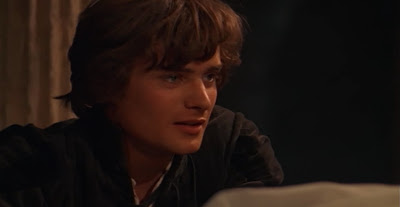 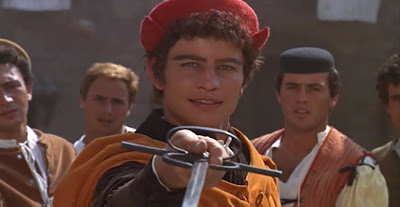 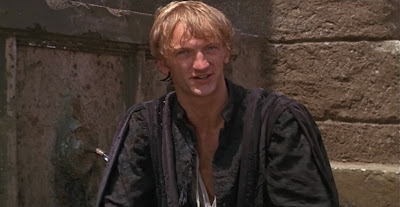 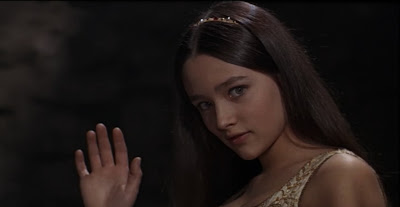 I really wanted to meet Ernest Borgnine, so I attended the Hollywood Collectors Show last Saturday. He's in so many of my favorite movies: The Dirty Dozen, Flight of the Phoenix, The Vikings, The Wild Bunch, among many others. He popped up in my favorite movies more often than my "favorite" actors did! And I can't think of a time when he wasn't part of my movie-watching experiences. So, I got to meet him and thank him in person for all the wonderful years of performances he has given us. He was very nice, gracious, and funny. He laughs a lot! I know he's 94 now, but he sure doesn't act it! I got his autograph on his biography, which I'm really looking forward to reading. It was an honor to meet him in person.

I also chatted with Ed Asner, who was also very nice, gracious, and very funny. He cracked me up. I think I laughed more waiting in his line than any other time that day! He was eating lunch when I stopped by, and he would growl, "Whaddaya want?" to people in line -- but he couldn't keep a straight face, and he would break into a smile. I told him the first thing I ever saw him in was Voyage to the Bottom of the Sea, and that he made such an impression on me that I never forgot his character's name (Alexi Brynov). Probably because his bad guy character died nastily by drinking sea water, and a gruesome, unusual death was guaranteed to make someone memorable in my young mind. I got a pic from Up signed for my nephew. Mr. Asner was a very cool guy.

Opera at the Bowl!

I was privileged to attend Turandot at the Hollywood Bowl last night. I love the Bowl. I never tire of attending concerts there, and I wish I lived closer (and money grew on trees) so I could go more often. Although I really do need to remember that it gets cold there after dark, no matter how hot the day, and bring a warmer jacket next time!

Puccini's Turandot is one of my favorite operas by any composer. It has such beautiful, stirring, noble music -- particularly the main theme. Whenever that theme swells and the chorus comes in, I get goosebumps or teary-eyed or both. Last night was a constant state of both! The first act was so beautiful, so perfect, that I nearly cried through the whole thing. It's very rare to get a performance that measures up to a recording, but that first act was outstanding. The singers, chorus, children's chorus, the orchestra, the tempos... it was exactly how I want to hear my Turandot. The tenor, Frank Porretta (who turned out to be a sub, and thank God, as he was phenomenal), and the soprano singing Liu (Hei-Kyung Hong) were in fabulous voice, and I could have listened to them all night. I'd love to have that first act on CD.

Alas, in the second act, Turandot finally shows up, and the opera had its only downside. At least in this performance, the soprano, Christine Brewer, could not hit the high notes. (I read in a review that she has sung the big aria in concert and did fine, so I'm prepared to cut her some slack... the Bowl is outdoors, chilly, and is probably a tough place to sing an opera for the first time, particularly the role of Turandot which is a toughie.) It's too bad, as she had a really nice voice when she sang lower and softer. She reminded me a bit of Marilyn Horne, if Horne had been a soprano. Similar quality. But when Brewer should have soared, she... well, she kind of yelled her highest notes (very bizarre) and then slid/scooped back down to the next note she could hit. It was rather like watching a minor train wreck. Fortunately, the really high stuff is only in the second act, and she didn't have to stretch too much in the third, so there was no more cringing, just pure enjoyment.

And even those disastrous high notes weren't enough to dampen the evening or the opera. I had a great time. I'm very impressed with Gustavo Dudamel's conducting -- he hit everything just right. The right tempo's a big deal when that main theme kicks in in Turandot. Too slow it can be ponderous, too fast and it loses impact. Dudamel conducted it beautifully the whole evening. There wasn't one thing I would have asked for differently (well, besides Turandot actually hitting her highest notes, and I'm hoping she just suffered an off night).

And I'm looking forward to Frank Porretta performing again in the LA area, as I will definitely go see whatever he's in. Good tenors are, unfortunately, a rarity these days.

Man, I do so love opera. My first and truest love!
Posted by DKoren at 10:17 PM No comments:

It's the simple things

Yesterday, my three-and-a-half-year-old nephew couldn't wait to show me his new DVD. "It's baseball! With Gene Kelly and Frank Sinatra!" I can't tell you how cool it is to hear this little boy enthuse about Gene Kelly and Frank Sinatra movies. He started with Anchors Aweigh, then he moved on to On the Town. His new movie addition is, of course, Take Me Out to the Ball Game, which he is already in love with. It may end up being his favorite of the three, given how much he loves baseball.

It's never too early to start the next generation on classic films!
Posted by DKoren at 11:55 AM 6 comments: