The Avengers and Don Giovanni

Well, my classic movie watching of late has been side-railed by two things:  The Avengers and Don Giovanni.  Yes, I really loved The Avengers movie.  I’ve never read the comic books, and I haven’t seen all the movies that led up to it (though I’ve seen most of them), but this movie was just the kind of movie I’ve been waiting for.  Just the right mix of serious and humor, with not too much humor.  The right mix of action.  Almost no bouncing camera!  Hooray and hallelujah!  Maybe that trend is finally going away???  Great dialogue.  Lots of good-looking actors.  All-in-all, it was a thoroughly entertaining way to spend two hours.  I’ve already seen it three times and will probably go a couple more times before it leaves the theater.  For anyone who knows me well and has seen the movie, then it's pretty obvious that Agent Barton/Hawkeye (played by Jeremy Renner) is my favorite of the Avengers.  Who else would I relate to/love?  LOL! 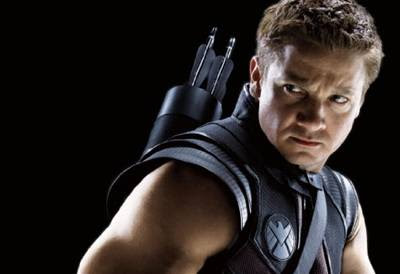 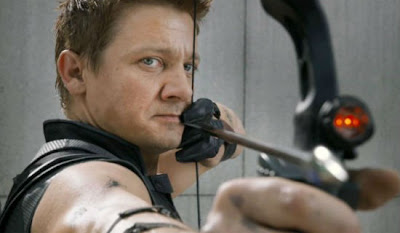 As for Don Giovanni, I attended a performance at the Disney Concert Hall last Friday with the LA Phil.  The orchestra was good, the singers were good, the production was terrible.  The set looked like someone had crumpled giant wads of paper all around, which in and of itself wouldn’t have been too bad – if they’d let the singers act out the story that goes with what they’re singing.  But nooooo.  Very little of what they did on stage seemed to have anything to do with the story.  Even worse, they moved in super-slow-motion or stood around frozen in place, or randomly lay down for entire scenes.  Okay, folks.  Don Giovanni is a long opera.  Do not make it bloody interminable by deliberately slowing the action down even more.  I mean I know the opera, I know the story, and I know a fair bit of the libretto.  It’s the one Mozart opera I’m rather fond of because it has action – murder, a couple assaults, an avenging statue, very funny exchanges between characters, and the lead character goes to Hell in the end.  And when I’m bored, you know the artsy and ridiculously static production ain’t working.  And I wasn’t alone in that opinion apparently, as after act one ended, quite a lot of seats were empty for act two.  People were bailing out while the getting was good.  Unfortunate, because the singers really were good.  But opera is neither just music nor just story – it’s both and more, and it all has to work together.  I don’t mind operas updated to modern or different time periods, but this was something else entirely. 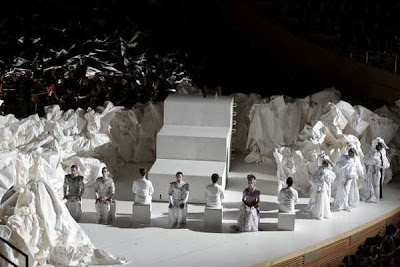 (yes, please, sit around on boxes doing nothing.  And why are so many characters dressed in white on a white stage?  Are they supposed to blend in and vanish? Grrr.)

But, it put the music back in my head, so I’ve been listening to my Simon Keenlyside recording and watching better versions on youtube.  And when opera is stuck in my head, I have a hard time watching movies.  Although The Avengers is oddly compatible with Don Giovanni, so this combo has been working for me.  I alternate listening to Alan Silvestri's score for the movie, and then listening to my favorite scenes from the opera... Yeah, it's pretty weird, but it works.
Posted by DKoren at 11:36 AM 4 comments:

This is my favorite Sherlock Holmes film to date, with my favorite portrayal of Holmes.  Why?  Easy. Because of the outstanding script by Nicolas Meyer and the brilliant performances by Nicol Williamson as Holmes and Alan Arkin as Sigmund Freud. The rest of the cast is big name:  Robert Duvall plays Watson, Vanessa Redgrave plays the lady in distress, and Lawrence Olivier puts in a turn as Moriarty. 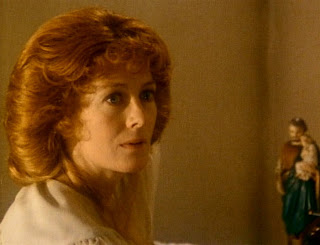 Nicolas Meyer is also responsible for the script to Time After Time (on my top 25 films list), as well as my two favorite movies in the Star Trek series, II (Wrath of Khan) and VI (The Undiscovered Country).  I don't think I've seen anything written (or directed) by Nicolas Meyer that I did not like.  Both Time After Time and The Seven-Per-Cent Solution deal with a mix of characters.  In Time After Time, it's H.G. Wells and Jack the Ripper, in The Seven-Per-Cent Solution, it's Sherlock Holmes and Sigmund Freud.

The Seven-Per-Cent Solution is a darker entry into the Holmes film, in that it deals with Holmes's cocaine addiction.  The plot concerns Watson and Holme's brother, Mycroft, concocting a scheme to get Holmes to Vienna, where he can be treated for his addiction by Freud, who has successfully helped others, including himself, overcome the addiction.  As Holmes fights to kick the habit, he takes on a case regarding a missing woman, with Freud stepping up to the sleuthing plate, every bit as brilliant in his own way as Holmes is.  It makes for a fabulous, entertaining partnership.  The first half of the film deals more with the addiction, the second half deals more of the action of solving the mystery, though both are well-balanced, and the film has always engaged me the entire way.  It makes particularly interesting use of Moriarty as well, not as the villain, but as a mathematics tutor from Holmes's childhood involved in a tragic incident.  I've never seen Moriarty as anything but the evil mastermind, and this different kind of nemesis is very refreshing.

The depth of Williamson's portrayal as Holmes never ceases to amaze me.  From the manic, obsessed-with-Moriarty, drug-addicted Holmes, to the recovered, calm and decisive Holmes, Williamson moves smoothly, brilliantly, and without a misstep between the disparate facets of the character.  He was a first-class actor who really got to shine here.  And, as usual with a Nicolas Meyer script, there's also real meat to the characters that an actor can dig into. 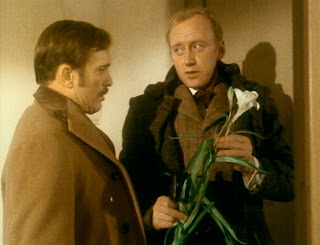 Alan Arkin is equally awesome as Freud, committed to helping Sherlock Holmes recover.  As they get more embroiled in the mystery aspects, it always makes me smile as the intelligence of both men both clashes and meshes.  I can never decide which character and performance is my favorite, Arkin as Freud, or Williamson as Holmes.  They're both perfect. 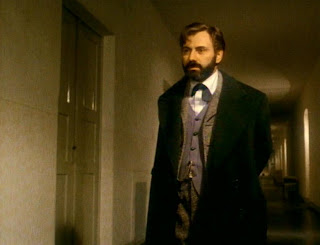 There's plenty of action too, from a duel between Freud and a German baron -- fought on a tennis court! -- to the big train chase finale, which includes a sword fight on top of the moving train.  The train chase across the European countryside is definitely my favorite part of the film.  It's perfectly paced to keep you on the edge of your seat, and satisfy a viewer with each step along the way to the conclusion. 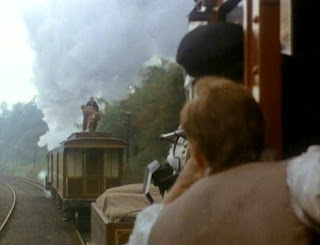 I think this might have been the first film I saw Robert Duvall in, isn't that odd?  He is a credible Watson, worried and steadfast.  He doesn't have that much to do, compared to Holmes and Freud.  It is a bit weird to hear him with a (admittedly) bad British accent.  It doesn't detract from the film for me, though, just sounds weird!

I love John Addison's score to this film as well.  I've seen other films with his scores, but none stuck in my head like this one.  I think he exactly nailed the right emotional tone this movie required, and I'm particularly fond of the train chase music.

This movie comes very close to making my top 25 favorite film list; in fact, it used to be on it, but alas, something has to drop off the list when new movies come along!  This movie isn't for everyone because of the drug addiction, but it's one of which I never tire.
Posted by DKoren at 7:35 AM 4 comments:

Wow, did this movie really come out that long ago?  I've been thinking a bit about Sherlock Holmes lately, and over the weekend watched two of my favorite Holmes movies that I own on DVD.  This is one of them.  This movie is such a delight.  It stars Michael Caine as Holmes and Ben Kingsley as Watson... only this story runs with the idea that Watson is really the detective. But because he was a doctor looking for a good position, he couldn't very well use his own name in all those stories he was publishing, so he created the fictional character of Sherlock Holmes.  When the stories become a gigantic success, he is forced to hire an out-of-work, drunken actor, Reginald Kincaid (Michael Caine), to play Holmes for the public.  When Watson attempts to dispose of the actor and announce to the public that he's the true detective, he finds that it's too late: Sherlock Holmes is the only one the public will accept.  So he brings Holmes back for one more case, involving a counterfeit money scheme Moriarty (played by Paul Freeman) is attempting to pull off.

This movie could not have been more perfectly cast.  Oscar-winners Michael Caine and Ben Kingsley make this movie.  Caine is thoroughly wonderful as the amiable, but inept actor forced to memorize myriad clues and info every day in order to pull the role of Holmes.  Kingsley is just as wonderful as the real brain, with little patience for the antics of the actor he's hired. Of course, they end up helping each other, and, of course, Michael Caine will have to step up to the plate and attempt some real sleuthing... with hilarious and satisfying results. I can't imagine anyone playing this version of Holmes better than Michael Caine. 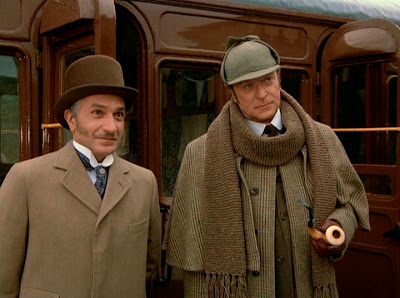 It's well-known I'm not so big on comedy, but this one plays just right for me.  The natural humor comes from the situations the characters get into and their personalities, which always works better.  The dialogue is smart and funny and doesn't get old, no matter how many times I see this movie.  There's some physical humor too, but it's not overdone.  It's quite an old-fashioned film, really, and I love it.
Posted by DKoren at 7:57 AM 5 comments: