Whoa, this was a doozy of a little Western! A familiar enough story but with new trappings, and, man, did I enjoy it. Basic plot involves a wealthy man, Ed McNeil (Sebastian Cabot), buying/forcing everyone else out of a large area of land. He's not above a little murder to scare the rest of the farmers out. His hired gun, Johnny Crale (Ned Young), kills a Swedish farmer for him. But just when McNeil thinks he's got everything in hand, the Swedish farmer's son, George Hansen, shows up, played by Sterling Hayden. He proves more stubborn and ornery than they figured, and things naturally boil to the inevitable showdown -- with a few twists along the way, so that things aren't quite what you expect.

Things I really loved about this movie: Hayden's character, Hansen, never touches a gun. Doesn't ask for one, doesn't even think about one, even after he's beaten and finds out what's really going on. Hansen is a seaman (how appropriate for Hayden!) and whaler, and when he heads to the final fight -- it's with a harpoon! Now that's not something you see everyday in a Western! 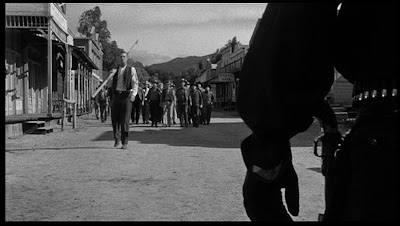 Johnny Crale, the hired gun... what an interesting character he turned out to be! He's the only complex character in the film. Crippled (lost his right hand, had to relearn to shoot left-handed), ready to hang up his gun... but won't, losing his nerve... but finding it again. He seems constantly on the verge of of regretting his actions and breaking away from it all with his long-suffering girlfriend, but always returns to what he knows best: killing. And he's pretty vicious about it. Not content to kill somebody, he empties his gun into them after they're down. It's wild and a bit unexpected. He's definitely a bit unbalanced and it was so cool to watch his cold fish character vacillating. When a victim finally stands up to him without fear, he completely trips on it, and really starts losing his hold on things. It's all quite fascinating and really turns the villain into something yet again.

And I loved how the film opens with the final showdown, cuts before you find out what happens, and then goes back and tells how we got there. The script is very tight, nothing wasted (Dalton Trumbo is the screenwriter, so this doesn't surprise me). The plot takes several standard Western tropes and twists them ever so slightly.

I think the only thing I didn't like was the score, which just seemed oddly perky and out of place. But that's a very small complaint in a movie that went way beyond my expectations. When I started the film, I thought it'd be just a throwaway Western... but that was not the case at all. This one's a keeper. It's available on Netflix instant viewing.
Posted by DKoren at 9:19 PM 1 comment:

Lawyers in Hell which includes my short story about Bat Masterson and Wyatt Earp, "Measure of a Man," has hit the bookstores ahead of schedule! It is out right now in paperback and hardcover! You can find it here:

Just a quicky review today, as I have not had time to watch anything else lately. I've had another short story accepted to an anthology, and I've been busy with editing and moving on to the next story that's due! Very exciting, but not conducive to watching movies! 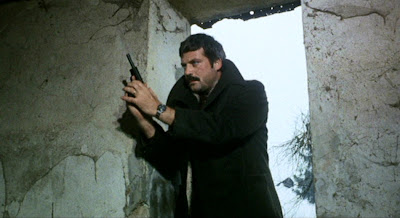 Revolver is an Italian production directed by Sergio Sollima and stars Oliver Reed and Fabio Testi and, while a little muddled and a little slow in places, still kept my interest throughout. I'm sure a good part of that is simply that Oliver Reed is just so damned entertaining to watch. The basic plot concerns a prison warden, Vito Cipriani (Reed), blackmailed into freeing prisoner Milo Ruiz (Testi) when his wife is kidnapped. He takes matters into his own hands and kidnaps Milo in turn, in order to gain insurance that his wife will be returned to him, then quickly finds out things are not what they seem. Plot twists, an unlikely partnership, and bloody mayhem ensue. 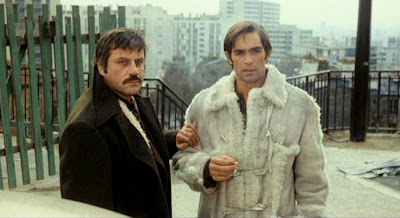 Things I liked: The partnership between Vito and Milo that starts out of exepedience and turns into genuine friendship. It's played naturally and really well by the two leads, and I liked it. I liked the story line with its conspiracies and twists. I liked the European shooting locations. I liked Ennio Morricone's score. I like the ending. I really like two Oliver Reed moments in particular, one where his character balks at trespassing. It's a lovely character moment, considering he's trying to illegally cross the border, not to mention he's stepped outside the law in several far more serious ways by that point. And there's a moment where he drives away from a random bystander wounded in a gunfight and asking for help. Vito's upset, he hesitates, and he still has to drive away, and it's very nicely done. Very haunting. It's one of those decisions you know will give his character nightmares later.

There was also one really neat line of dialogue which sort of sums up the theme of the film:

"Society has many ways of defending itself: with red tape, prison bars, and the revolver."

I like that a lot. It's used in the trailer, and I can see why. It's a nice hook.

Things I didn't like (and groaned over): the horrible 1970's clothing some of the characters are wearing... egads. Seriously, I'm not sure there was a worse fashion era than the '70s. Or at least, it's not my style. I couldn't even bear to take screenshots of the worst offenders. But Oliver Reed, fortunately, was not a casualty of the awful wardrobe brigade and he looked great. Almost out of place next to the eye-popping outfits he was surrounded with. Dig his warm coat with the collar turned up half the time.

I'm still a little confused over who one character was who popped up out of seemingly nowhere and I never did catch a name or who he was or how we arrived there, but okay, I'll go with it. And there was some really bad cliche dialogue a couple of times, but overall, I still enjoyed the movie. Any excuse to watch Oliver Reed be broody and angry and bust up the scenery is time not wasted. 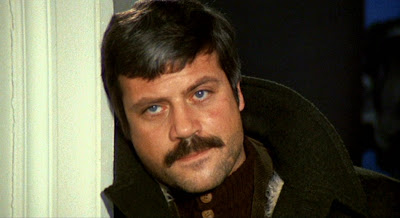 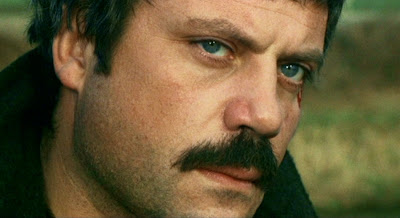