I'm sorry I missed this one in the theater, as this is one enjoyable and very funny movie.  Not for little ones.  Even though it's animated, the humor here is more adult, is a bit crude in a few places, and most of what makes this movie so funny would fly right over my nephew's head.  Rather existential searches for self are not exactly on a five-year-old's radar.  Though there is plenty of action that will keep him happy... when he's a few years older. But I loved it and immediately bought a copy after I returned the Neflix DVD. 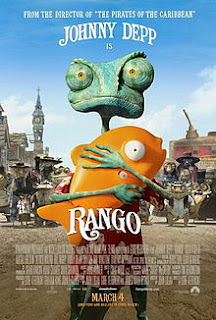 The plots concerns a sheltered and lonely Chameleon lizard who ends up unexpectedly in the Mojave desert, in the animal-populated town of Dirt.  It's a town that pays homage to the towns of old classic Westerns, complete with the usual complement of Western characters, from good guys to bad guys.  The town is suffering from extreme drought, and if they can't find out what happened to the water soon, they'll all die.  The lizard (who is really on a quest to find his own identity) embraces his sudden shift in his fortune and accepts a position as the new sheriff of the town.  But can he truly become his new identity?

As a huge Western fan, this movie delighted me with all its references (subtle and overt) to the Western genre.  I love the brief bit of the Magnificent Seven theme that plays through one scene.  I love the mariachi band owls who serve as narrators and Greek chorus.  I love the Spirit of the West, whose appearance made me clap outloud with delight.  Too perfect.

And by far the best part of this movie is simply watching the character of Rango (voiced perfectly by Johnny Depp) as he makes up stories, tries to blend in, has multiple adventures in this animal-version of the Old West on his quest to find himself.  Rango may be just an animated lizard, but he's one of my top favorite Johnny Depp chracters.  Just love him, his crazy dialogue and antics, in this movie.

The first forty minutes are definitely my favorite part of this film, though I love the rest too.  The rest is more plot-driven and serious, the first half is just plain laugh-out-loud fun.

The animation is pretty eye-poppingly amazing.  This one is by ILM, and wow, it is outstanding.  I've had to pause it on certain parts, like the hawk, just to study the details and ooh and ahh over how amazing it looks.  There is so much detail to these characters, to the landscape, to the swirls of dust.  I don't know how they do it, but I'm hoping they do another animated movie, cuz this one was first-rate. 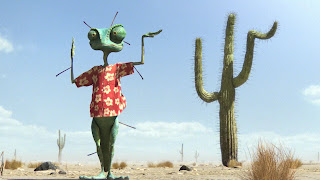 This movie is also extremely quotable. My current most quoted lines are:

"Crunchy creamy cookie candy cupcake."
"I think the metaphor broke my spleen."
"Stay OUT of my peripheral vision!"
"Get your slimy webbed phalanges off my boots!"

I think every one of those gets said at least once a day.  I've watched the whole movie three times already, and the first half at least six times -- and that's just in the last two weeks.  It just doesn't get old.

Just wish I'd caught it in the movie theater!  I'll bet that animation would have looked even more spectacular on the big screen.
Posted by DKoren at 5:34 PM 7 comments:

You have been warned! 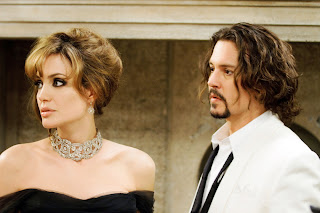 There's quite a few things wrong wth this movie, but there's also quite a few things right.  One of the things wrong is the casting.  Now, I really like Angelina Jolie.  She's one of my favorite current actresses.  I think she's cool, beautiful, and fun to watch.  But she didn't work for me in this film.  I'm not sure what it is, exactly.  She's so busy being aloof and mysterious that I failed to connect with her, or see why Frank, Johnny Depp's character, would fall for her, other than she's beautiful.  Her character either isn't strong enough, or isn't vulnerable enough.  But I know she can be a lot more than a pretty face, so her character's distinct lack of personality in this movie was very disappointing.

But Paul Bettany and Timothy Dalton are in it, and they both have personality to spare so they somewhat make up for her.  And Johnny Depp, of course, is always good.  The Venice locale is lovely, though... flat.  As in, this movie could have been set in any city in the world.  They just happened to choose Venice, but it fails to become part of the movie.

And then there's the ending.

Cardinal rule of writing... don't waste your reader's time.  Same thing applies to movies.  Do not waste your audience's time.  How do you waste their time?  By developing characters they like, giving those characters an arc, letting those characters step beyond their ordinary lives to do something extraordinary... then throwing all that development out the window.  It's cheating.  It's like the "it's only a dream!" ending.  It makes me mad.

And now for the big spoilers.  You see, Johnny Depp's playing a character named Frank.  A math teacher from Wisconsin, on vacation in Venice.  He gets sucked into a dangerous convoluted plot, to be used as bait against his knowledge, basically, to catch a thief.  Cool.  Right on board.  There's a bunch of British, French, Italian agents trying to catch the thief.  There's also a ruthless, brutal gangster who will do anything to get his money back from that thief.  Cool.  still onboard.  So, in our finale, Angelina Jolie is caught by the gangster and threatened if she can't tell him where the hidden money is.  And so, our math teacher from Wisconsin goes in to confront the bad guys when the British agents won't help her.  He goes in to save her cuz he's fallen in love with her.  Dude, this is cool.  This is awesome.  This is an ordinary guy going beyond his ordinary life for the woman he loves.  I am soooooo on board with this.

But no.  Surprise!  He's not really a math teacher from Wisconsin.  He's actually the thief everyone's been looking for the whole movie... hahah, fooled ya!  Isn't that clever?

Movie... I hate you for taking away what could have been an awesome ending. I wouldn't have cared if Frank had gotten killed trying to save her, or if she was killed because he was in over his head and couldn't save her, or they ended up in jail or lived happily every after.  As long as the movie fulfilled the promise it set up from the very title of the movie -- an ordinary guy willing to do whatever it takes.  But nope, it cheated.  It made it all a dream.  It ended up wasting my time, made me want to bang my head against the wall, and... well, gave me a ranting blog post.

I'm sure some people will love the "surprise" ending.  But I am definitely not one of them.
Posted by DKoren at 7:35 AM 2 comments: