The Rules:
1. Link back to the person who tagged you.
2. List four fictional characters (use pictures if you want! They can be from movies or books) and, if you like, describe what they're like and why you believe they relate to you.
3. Tag a few other blog people! Three, or four, or even twenty. :) Share the fun! Be sure to let them know you've tagged them! 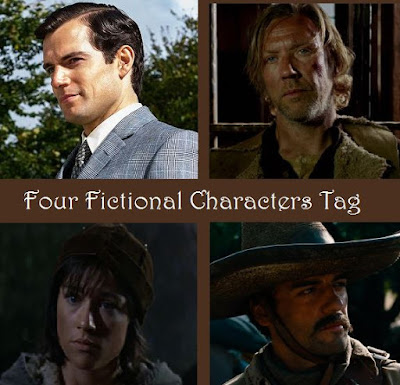 1. Napoleon Solo (Henry Cavill) from The Man from U.N.C.L.E. (2015)
Like Napoleon, I prefer to work alone, and if I do have to work with someone I don't know, I would be a bit of a control freak about it because having to depend on others to do their job right is very hard for me.  However, once I accept someone, then I’ll risk my life to save them and they have my trust from then on.  I lack Napoleon's specific safebreaking skill set (unfortunately), however, like him, I’m pretty unflappable under action, stress, and duress.  (I’m the one who went back to sleep after the Northridge earthquake wrecked my apartment.  I mean, come on, it was 4:30 am in the morning.  Aftershocks don't bother me.  The house and broken stuff can be sorted later.  I just wanted to sleep.)  Like him, I’m not riled easily, but, on occasion, I don’t mind baiting others, particularly if I'm trying to get their measure.  I also like the finer things in life, and we’re both good cooks.  Also, the fact that it wouldn’t match would definitely bother me!

2. Peter Jensen (Mikael Persbrandt) from The Salvation (2014)
This older brother character is one I relate very strongly to.  We’re both quiet and steady, a bit cynical, and not easily provoked.  We give our married younger siblings time and space to be alone with their spouses, and can happily go off and/or stay in town by ourselves.  Being alone doesn't bother us.  And if you mess with our younger siblings, we will calmly and efficiently (and violently, if necessary) do whatever needs to be done to rescue them.  If that means leading the bad guys away and possibly sacrificing ourselves to save our siblings... yeah, we'd do that too.

3. Valerian (Caitlin Clarke) from Dragonslayer (1981)
One of the first female characters I related to.  She has spent most of her life masquerading as a young man, both to avoid the horrible lottery that selects which girl will get sacrificed to the dragon, and to get things done she couldn’t do as a girl.  She leads a group to the castle of a wizard to petition his help in defeating the dragon.  She goes by herself to the dragon’s lair to gather scales to make a shield.  She stands up for what she believes, and she’s willing to fight for what’s right, including standing up to the power of a king and his men, and the dragon as well.  Like most of the characters I relate to, she has little respect for authority when it is not used for what she perceives as right.

4. Victoriano Ramirez (Oscar Isaac) from For Greater Glory (2012)
I relate to quite a few freedom fighter characters, and of those, I probably relate to Victoriano the most.  He leads his group of ranchers himself, upholding his own sense of honor and justice.  He doesn’t trust the General or anyone else until they actually earn his trust.  At the same time, he doesn’t discount them out of hand either.  He’s willing to listen to what they have to say, even if he’s openly skeptical.  He relies on his own scouts for information first.  Like him, I depend on my own intel, not what others tell me, and neither of us are team players.  At least not until the team proves itself worthy, and we see everyone else can pull their weight.  Even then, we still have trouble following orders, and when Victoriano sees something wrong in a battle plan, and it appears no one else has seen the problem or is acting on it, he takes the initiative to take care of it himself, which is not necessarily a good idea, but darn it all, no one is doing anything.  I would do the same thing, and I definitely share his impatience with apparent inaction.

I don't know who to tag, but please, if you read this and haven't yet been tagged, I'd love to read what other fictional characters other people relate to!
Posted by DKoren at 8:08 AM 3 comments: