So, started a new novel, currently titled The Traitor, a couple weeks ago. I was getting fair daily word counts in before vacation, and now need to get back in the groove and start making some steady progress.

Problem is, I've still got this Latin-flavored mood running rampant through my head right now (thanks to Gilbert Roland) and that doesn't jive with the original concept of the novel. Doesn't help either that I keep listening to scores like Horner's The Mask of Zorro, which is perpetuating Old California motifs and not letting me get into the right headspace.

And the bigger problem is that I have this incredible urge to write Cisco Kid fanfic right now. I can't help it! I've finished watching Vol. 2 of the Gilbert Roland Cisco Kid movies (reviews of those later), and I just adore him in this role. His Cisco is cocky and irreverant, and he handles everything that comes his way with easy self-confidence and my writerly brain just screams out to write him a story where that gets taken away. Where his happy little world of tequila and women and saving the day from unworthy villains crashes down around his shoulders. Because I desperately need him in a meatier story, where the villains aren't so eye-rollingly stupid and his sidekick isn't strictly comic relief.

Which, considering my novel starts with my hero's happy little world crashing down around his shoulders (well, duh!), these feelings should be satisfied by working on the new novel.

If I could get back working on it.

And that means getting my brain straightened out. I need to stop sitting at the piano and composing Spanish-flavored melodies. I need to return the Cisco Kid dvd to Netflix and stop watching Gilbert Roland movies and his really fun guest star appearances on Zorro on youtube. And I desperately need to stop hearing my hero's dialog in Gilbert Roland's accent. Or I need to embrace it and start hearing everyone else's lines that way too, LOL! -- there is that option, I guess. Hm.

And I find this current dilemma extremely vexing because it's so unsual for me. The voice of my hero is one of the first things I hear, it's one of the things that drives the creation of a book... and in this novel, despite the planning, despite the solid images in my head -- I can't hear him clearly. And it's driving me crazy. So, I'll just keep writing, cuz I know where the plot's going, and wait for him to find his own voice. 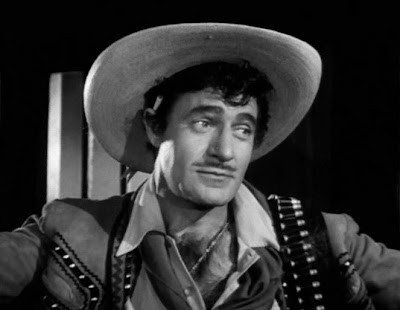 Had one of those amazing vacations I'm very sorry to see end, but end it did. Nothing stops time, alas. Spent most of the vacation hanging out in a rented house in North Carolina with a bunch of women friends (from as far away as Australia) who love the same television show (Combat!). We watched episodes, chatted, listened, goofed... I haven't laughed that hard in ages.

Thank goodness for great tv shows made in the '60s, and thank goodness for the internet for letting people with the same passions find each other. A better set of friends I couldn't ask for!
Posted by DKoren at 7:47 AM 4 comments:

Watched three Gilbert Roland Cisco Kid films from 1946: The Gay Cavalier, Beauty and the Bandit, and South of Monterey. Rather routine stories, full of predictable cliches and with bad guys conveniently spouting their plans in front of good guys hidden behind trees so we can go foil their plans without having to work too hard. There's no real tension or danger in these films, but I still found them diverting enough entertainment and enjoyed them.

Of the three, The Gay Cavalier was the best as it had the more interesting story (Cisco framed for robbing a stage coach), better action -- including a nice sword fight -- and better dialogue. And while the movies are less than stellar, Gilbert Roland makes them all watchable for me. His Cisco Kid is always calm, well dressed and hat at a rakish angle, always smoking (and putting his burning cigarette behind his ear when he needs it out of the way, yikes!), always drinking tequila with his lemon and salt, always leaning casually against something, very suave, always keeping an eye out for a pretty girl. He carries around pocketful of matching necklaces that he passes out to any woman he likes. But if they start talking marriage, he splits as fast as he can. And he rides an absolutely gorgeous palomino horse that would probably go on my "Movie Horses I wish I Owned" list. Of course, everyone else politely rides dark-colored horses, so his palomino stands out even more. 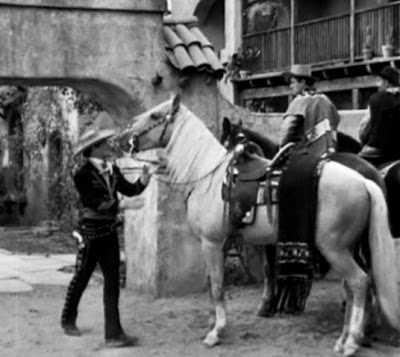 I was reading some reviews, and seems a lot of people prefer the other "cleaner" incarnations of the Cisco Kid (and there are a ton of Cisco Kid films and a tv show). I haven't seen the other versions yet, but have a feeling because this is the one I saw first, that I'll be the opposite. I'll be missing Gilbert Roland in the other versions, even if the other films have stronger stories, etc. I'm quite okay with an Old West Robin Hood who helps out the poor any way he can, but who also keeps enough of his loot to live nicely himself. Who has his vices. Makes him more human to me. Less black and white, more grey. I like that.

He has a gang; however, they don't seem to do anything, and Cisco frequently leaves them behind at times I think a little backup would be a useful thing. I mean, really. I know he's brave and more than capable, but who in their right mind thinks: "Time to go brace the villain and his henchmen in his lair... I'll just leave all my men with their guns behind." Sheesh! Honestly, I think he keeps them around just for their singing. They sing spectacularly, you see. In perfect harmony whether at a campfire or at a canter on horseback. They keep him entertained. He does at least take his right-hand man, Baby, along. Different actors play this character in these films, and I got spoiled by the one (Nacho Galindo) I saw first in Gay Cavalier. He was perfect. The replacement in the other two movies (Frank Yaconelli) lacked the "looks harmless, but has very sharp teeth" competence of the first guy. He was more the comic relief, less spontaneously dangerous.

In The Gay Cavalier, he's going back to visit the lady, and he sneaks in carrying a tray of hot chocolate and cakes she had requested from the servant. When he gets to her bedroom, he finds she's singing a romantic song about the dashing caballero she just met (him). So, he takes a seat in the antechamber, tries out her hot chocolate and eats her cakes, while listening to her finish the song. Oh, and him spiking the punch at a party he's crashed cracked me up too. Scenes like this just make Cisco so interesting and not boring.

Beauty and the Bandit has the girl (same one from The Gay Cavalier) physically stripping him out of his shirt so she can go wash it for him while he stands there bemused and at a loss for words. And how come more ladies don't try this out, hmmm? 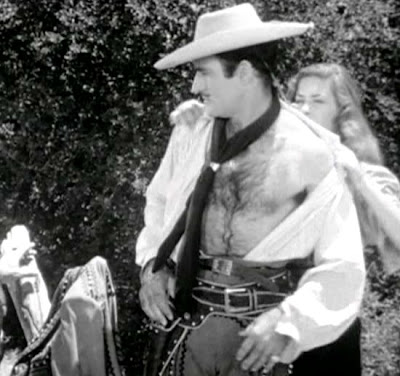 South of Monterey has a great scene with him talking to a cockroach in jail. "This room is already occupied." Snort. He finally gets wounded in this movie. Shot in the shoulder, bad enough that he barely escapes the bad guy's posse, and he even passes out. But gee, when he comes to, all bandaged up by the ladies in that film... he's well enough to punch out bad guys with that injured arm and never notice the wound again the rest of the movie. What medicinal secrets do these cinematic women have, anyway? LOL!

All in all, they were fun enough that I'll be getting Vol. 2. next.

What I find most interesting about this movie is how much I empathized with Barbara Stanwyck's character. This movie had a way of making me really feel what she was feeling, with the exception of her liking Wendell Corey's character... er, is she nuts? But her love of her father (Walter Huston) and the ranch and her best friend (Gilbert Roland... more on him in a bit), then her reaction to Judith Anderson's presence (is she ever not scary?), her helplessness as the ranch starts slipping away from her. Then I felt the same hatred for her father when he does something completely nasty. I wanted revenge on him myself... I mean, how dare he do that? GAH! Then, watching Walter Huston on his cattle drive, taking down the bull single-handed, emotionally coming around again and not being able to maintain the hate... just like Stanwyck's character.

It was a fascinating roller coaster ride that I did not expect to come full circle like that. After what he did, I didn't think I could ever like his character again, and yet I did. Good filmmaking that, but then this movie is directed by Anthony Mann, so no surprise at all.

Walter Huston is fantastic. He's always been my favorite of the Hustons, and he's so full of energy and gumption, grins and anger. He grabs your attention everytime he's on screen. Barbara Stanwyck is, as usual, at the top of her game, playing an even more strong-willed, stubborn woman than usual. I think it's that steely core and her very confidence, that when she finds that she could lose everything she's worked for despite that confidence -- when she's shaken that badly, the vulnerability her character's worked so hard to hide really resonates.

When Wendell Corey first walked on screen, I thought he was James Donald. The two look remarkably alike at first glance. But Wendell Corey is so flat and devoid of emotion in this movie, except for that delicious smirk he gets when he takes $50,000 instead of Barbara Stanwyck. That's a priceless moment. He seems an odd casting choice, really. Honestly, I wanted someone more classically handsome, more charming and deceitful, cuz I just couldn't see Barbara Stanwyck falling for him.

Then there's Gilbert Roland, who doesn't have a big role, but it's a pivotal one. I've liked him since I first saw The Bad and the Beautiful back in the late '80s. Gilbert Roland has this sensual ease about how he physically moves, rather cat-like. He's a neat actor to watch, and I always love catching him in something new. He's everything Wendell Corey isn't, but Barbara Stanwyck only sees him as a friend. Actually, their relationship in the movie was very refreshing, as it's rare to see a guy/girl best friendship. I love their dialog together, particuarly as it's with him that Stanwyck's character lets her guard down. 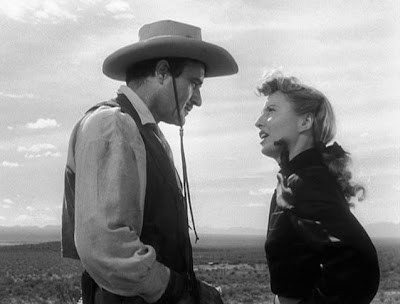