I was visiting a friend for the past few days, and she showed me a bunch of movies, new and old, that I'd never seen before.

Gentlemen Prefer Blondes (1953) -- fun! I love Jane Russell in particular, and the music is catchy.

Meet Me in St. Louis (1944) -- entertaining, nice music, but not one I particularly want to see again.

Chicago (2002) -- blech, did not like this one, mostly because I could not care about the unsympathetic characters. Why, exactly, am I supposed to root for murderesses to evade their sentences? I did like Catherine Zeta Jones, though. I thought she was great, but it's just not a story I cared for.

True Grit (2010) -- well, I didn't actually finish watching this one. I was so bored about forty-five minutes in that I gave up on it. I know, I'm a Western fanatic, but nothing about this one caught my attention long enough to keep it.
Posted by DKoren at 10:04 AM 3 comments:

Click here to read a snippet from my upcoming story "Measure of a Man."
Posted by DKoren at 12:21 PM No comments:

Woo! After a long hiatus of working on novels, I have just had a short story accepted to the newest volume in the Heroes in Hell anthology. My story is called "Measure of a Man" and will be out this summer in Lawyers in Hell. I got to write about Bat Masterson and Wyatt Earp, and even work in opera. Life is good!

This is not the cover, just a promotional postcard, but it's pretty cool looking! 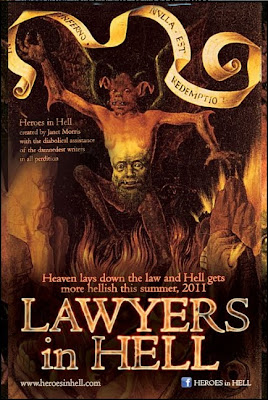 This is an excellent film. It won't make my own favorite list because I dislike Henry Fonda and there's way too much of him and way too little Richard Widmark, but that's a personal prejudice, and doesn't prevent this from being a great movie.

This one has a complex, yet satisfying plot. The town of Warlock is overrun by a nasty set of cowboys who feel it's their right to control everything, using whatever violence is needed. Richard Widmark plays Johnny Gannon, a member of the cowboys who stays distinctly on the sidelines and who decides to quit their company when he can't stomach their methods any longer. His younger brother, Billy, played by Frank Gorshin, stays on with the cowboys.

The town hires a famous marshal/gunfighter, Clay Blaisedell (Henry Fonda) to clean up the town. He brings with him his partner, Tom Morgan (Anthony Quinn, who is fabulous in his role), and their entire gambling establishment! He does his job, cleans up the town, but in a bid for true law and order, the town hires Gannon as the new marshal. Multiple alliances, betrayals, and showdowns ensue between various parties.

What I liked best was, of course, Widmark's role as Gannon, taking on a tough job but believing in the law and justice, even though he's liable to get backshot at any moment. I love love love characters who are willing to die for what they believe in. I loved Anthony Quinn and his complex dependent relationship with Henry Fonda. Movies rarely get into how complicated friendships can be. Usually, scripts reserve such complexity for "love" relationships, but in real life, straight friendships can be even more complex. This movie doesn't shirk that, and I very much appreciate that. De Forest Kelley also has a nice role as one of the cowboys, who goes from leading the violence, to honoring his own word and helping out Widmark when he's also had enough.

The movie is action-filled, and yet works in the deeper stuff without ever slowing down the action. I appreciate that too. It's a well-rounded film with a satisfying ending. Very enjoyable.

The only things I didn't like where the two women characters, played by Dorothy Malone and Dolores Michaels. Their characters were both necessary to the story, but I found them both annoying. And I really wish someone else had the Henry Fonda role. He's fine, he does a good job, there's nothing wrong with him and his character is quite intriguing, I just personally don't enjoy his performances. Sorry.