Finished writing my 50,000 brand spanking new words today, which successfully completes my sixth successive nano. This year was a tough one, and I learned a big lesson. Do not write the second half of an unfinished novel when you have rather large problems with the first half and you've done zero planning on the second half. It is so much easier to start a novel for nano. There's all that room to explore and you can just go with the flow. Finishing a novel though... I was tying up threads when I wasn't even quite sure yet how everything comes together. I needed more thinking time than I could spare and still meet my word count.

That aside, every scene had a critical change, and every chapter ended on a cliffhanger, and my muses did not let me down once, but kept me going even when I thought for sure I had nothing to write next. Several things surprised me, though not in hindsight. Typical. The subconscious knows what it's doing. I so liked where the second half went, that when I start novel revisions, a good chunk of the first half will go out the window so I can work with the new directions I uncovered. I also left off tonight right before The Scene, aka the cool scene that made me want to write the novel to begin with, the scene I've been writing towards since day one, so continuing through the last bit to complete the first draft won't be hard.

Random things about this year's nano:
All in all, a tough, frustrating, but ultimately quite satisfying nano session. I'll be able to use most of what I wrote, and my P.O.W. novel is *this* close away from a completed draft.
Posted by DKoren at 10:08 PM 4 comments:

Nano sure has done a number on my blogging time! I've made time to watch all kinds of movies, but haven't written about any of them. I wanted to finish off my Tyrone Power movie binge with a write up on the last of his movies I had lined up, Son of Fury. Except I watched it close to a month ago and I've forgotten all the details I wanted to write about!

I did enjoy the movie. Nothing outstanding, but good, solid entertainment. I'm still a sucker for South Sea island tales, and I got that in part here. George Saunders is our bad guy again, very suave and cocky and cruel. A very young and gorgeous Gene Tierney shows up as our hero's love interest. They work very well together. Elsa Lancaster gets a brief role, helping Tyrone's character escape the police, and she's as scene-stealing as ever. I loved her little part.

So, instead of a proper review, a few pictures... 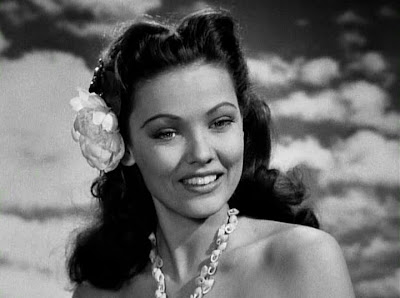 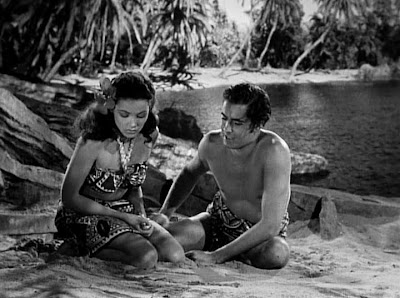 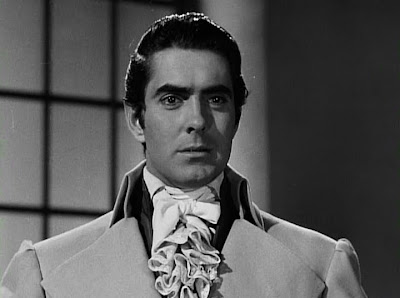 In nano progress, it goes. I got stuck for a bit, but came unstuck a couple nights ago when a few consecutively nastier surprises happened. Now my hero is on the run from both the police and the bad guys, and whenever I'm writing action, I write very easily. I'm hoping it'll keep up, as I'm only at 27K in nano (77K for the novel as a whole). I also need to start figuring out how to wrap this novel up. It'll probably go over 100K at this rate, as the 20+K remaining is about 10 scenes, and I simply can't see how I'd pull all the threads together in just 10 scenes. Though you never know, I may be farther along than I thought.
Posted by DKoren at 8:01 AM 4 comments:

Happy Birthday to fellow blogger, the talented Kate Gabrielle, of Silents and Talkies! (and not to mention several other delightful online journals, like the flapperdoodles!) 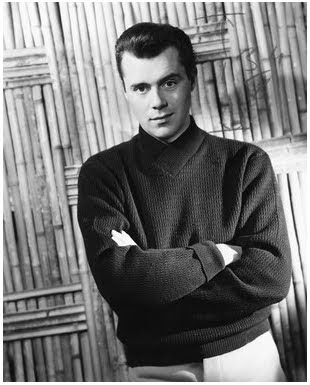 Ahhh, I do so love writing. My writing gets sparser and sparser each nano, which isn't so good for reaching word count each day, but it is better for the end result. Less editing. :-D This year, I'm writing a bit by the seat of my pants. Oh, I have a couple big scenes I'm writing towards, and I know the ending (I think), but the rest is surprising me a bit each day. So far, it's working out extremely well, and the story is right on track.

I got one of those wonderful out-of-the-blue story moments yesterday that changes everything for my lead character. And not in a good way. (Of course not. If it was good, I wouldn't be telling the right story.) All because he blurted out someone's name and let them know he recognized them. Someone he isn't supposed to know, someone he couldn't possibly know, someone who doesn't want to be known, who isn't supposed to be there. Someone who will be coming to find out how my hero knows his name.... Oh, the delight! This gives me much to work with, and that coupled with a couple other twists that popped up a few days ago, I'm seeing how things tie together towards the end. The neat -- and terrifying -- thing about nano is you move so fast -- a scene or two a day -- that I barely have time to think through the possible consequences of characters' actions before I have to deal with them the next day. So when I get these lovely muse-bombs dropped in my lap, it sure makes writing the next segment easier.

And man, I still can't write in the mornings to save my life. I'm an evening writer, and there's just no fighting it.
Posted by DKoren at 7:44 AM 4 comments:

Nano report, or how not to get your word count for the day 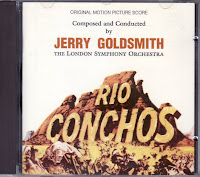 Do you remember the first CD you ever bought? I do. Of course, for me it was a big deal because I come from the LP era. I didn't get my first CD until I was in college. It was Jerry Goldsmith's Rio Conchos, bought in person on my first visit to Intrada, best soundtrack store ever. It was the first CD I ever bought, and I didn't even own a CD player yet! Made a tape of the album off a friend's CD player so I could listen to it that way. It's still one of my favorite Goldsmith scores, and I've listened to it hundreds of times.

I've wanted to see the movie forever, but, never managed to catch it on TV when I had TV, and it's still not out on DVD to my knowledge. But, tonight, lo and behold... Netflix suddenly has it available for instant viewing! This being the month of Nano, finding procrastination of such a calibre is an opportunity not to be wasted! So, naturally, I just spent two precious writing hours watching it.

1. There's a reason Richard Boone is one of my top ten favorite actors of all time.
2. There aren't words powerful enough to describe how much I love Jerry Goldsmith's music.
3. If there were no movies left on the planet but Westerns, I'd be perfectly content.

I was not disappointed in this movie, and if it ever comes out on DVD, I will probably buy it. Story's interesting and has plenty of action. It's quite violent, but not gruesomely so. But really, I was watching for Richard Boone. He just makes me grin and grin. He's perfect in roles like this. He plays a great character here. A Confederate Major who comes home from the war to find Apaches have tortured and murdered his wife and daughter. Sinks into hate and a bottle and revenge. Almost a cliche, but in Boone's hands the character becomes quite complex. His acting rounds the character out, gives him depth where another actor might not have. He lets you see his character's pain behind the flippancy and his inhumanity, and then, his remembered and regained humanity and honor. He gets the best of the dialogue throughout, and the best scenes. His character goes through a subtle redemption arc, and his scene with the dying woman and baby really got me. Really, he's the only character in the film who gets to do anything meaty, but I don't mind that.

Stuart Whitman plays the sort of upstanding hero. Sort of. (After all, it's his character's mistake that puts the rifles into the bad guys' hands.) I like Stuart Whitman, I do (Comancheros!), but really, does he ever do anything in any of his films? Jim Brown is quiet, but where Whitman is a bit flat, Jim Brown always has presence, and he gets a few nice moments. Edmund O'Brien -- hee! He's always solid, particularly playing whackos. Speaking of whackos, Timothy Carey sneaked in, in an uncredited role. in this one. But the guy is instantly recognizable, and while he's not playing a dangerous loony in this one (in fact he was surprisingly normal and low key), he's still has that loose cannon quality that always makes him a bit freaky. Every time he pops up in a film where I don't expect him, I kind of sit on the edge of my seat waiting to see what he's going to do. 'Cause you just don't know with him.

So, I'm happy, and I've nicely avoided writing tonight. Which is okay, as I wrote a bunch of notes this morning before work and I'm still digesting the new direction I want to take the story.

Though, I can't tell you how weird it is watching a movie for the first time when you know the score inside out and backwards but nothing about the movie. Always a bit surreal.
Posted by DKoren at 9:26 PM 8 comments: