Last weekend, my sister and I went to Las Vegas to go to the annual Star Trek convention they hold there.  It was our first time attending, and it was a ridiculous amount of fun. 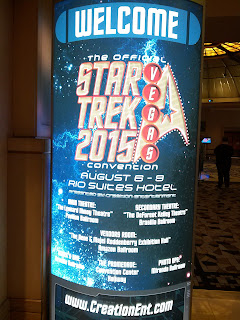 We got to hear all sorts of actors talk and answer questions, from the entire crew of Voyager, half the TNG crew, half the DS9 folks, George Takei, Sir Patrick Stewart (!!!), and Captain Kirk himself, the one and only William Shatner. 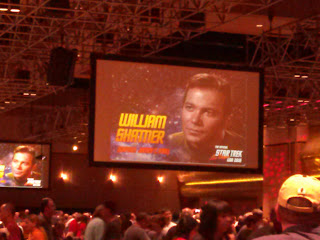 Star Trek, the original series, was my childhood.  It was on constant repeats on television growing up, and we watched it just about every night for years.  I watched almost all of Next Generation while it aired (missed the last season), watched almost all of DS9 (again, missed the last season), and all of Voyager.  Tried Enterprise, but couldn't get into that one at all.  I'm told it got better after the first few eps, but I have not gone back to try it again.

The convention had really cool recreations of some of the sets. 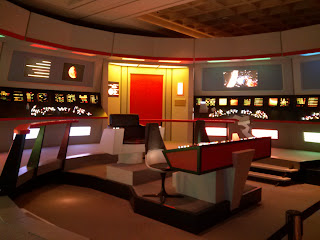 We really wanted this transporter to work... 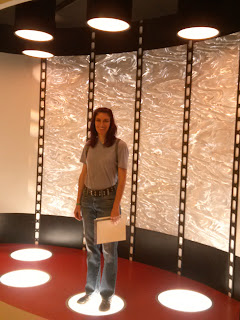 There were people of all ages attending and it seemed like at least half of them were in some version of a Starfleet uniform or other character costume costume.  It was awesome.  Everywhere we went in the hotel/casino, there were Starfleet officers.  Of Klingons.  Or Borg.  Or Vulcans.

And the best part?  Everyone was happy and cheerful All Weekend Long.  I mean that in all seriousness.  Smiles, grins, laughs from absolutely everyone we saw, from the vendors, to our fellow attendees, to the actors... everyone was so full of upbeat and full of positive energy, it was rather astounding.  Not once did we see a frown, a complaint, or a hint of negativity.  Not. Once.  We got in line at one of the hotel Starbucks, and there were 40 people in line ahead of us.  FORTY PEOPLE!!!  Not one person complained, no one fussed, more people just got in line behind us, and everyone patiently waited for their turn.  How often does that happen???  (There was a longer wait at Starbucks than to see some of the actors!)

And the actors were so funny in their panels that by the end of Sunday, we were laughed out.  We'd busted a a gut so often, we had nothing left to give.

It ended up being one of the most memorable weekends of our lives.
Posted by DKoren at 10:26 AM 4 comments: