From Hamlette... Things in various categories that make me happy.


Books:
The Secret Ways by Alistair MacLean
Golden Witchbreed by Mary Gentle
Anything by H.G. Wells
Han Solo and the Lost Legacy by Brian Daley
The Plastic Abyss by Kate Wilhelm
Four Ways to Forgiveness by Ursula K. LeGuin

Songs:
"Run for It" from Lonely are the Brave by Jerry Goldsmith
"Cristeros" from For Greater Glory by James Horner
"The Resistance" from The Force Awakens by John Williams
"Wild Boys" Duran Duran
"Nume custode e vindice" from Aida by Giuseppe Verdi
"Eri tu che macchiavi quell'anima" from Un Ballo in Maschera by Giuseppe Verdi
"The 1960's; The Turbulent Years" from Nixon by John Williams

Misc:
Cats - cats curled up next to me at night, riding on my shoulders, greeting me at the door when I come home, bugging me to feed them, sprawled on my lap, purring, the way they come running on the double when called.  Cats cats cats.
hot black tea
soundtracks
opera
Duran Duran
driving stick shift
The Star Wars universe
Posted by DKoren at 10:34 AM 13 comments:

I discovered Eugene Onegin, Alexander Pushkin's novel in verse via opera.  A few years back, my sister and I went to see the Royal Opera house's version broadcast in our local movie theater.  My parents were so very Italian/French opera oriented growing up, that even though Tchaikovsky is one of my dad's all-time favorite composers, we somehow had never listened to Eugene Onegin, other than the famous instrumental portions.  Our introduction in 2013 was with a magnificent version staring a first-rate cast:  Krassimira Stoyanova as Tatyana, Pavol Breslik as Lensky, and my beloved Simon Keenlyside as Onegin.  My sister and I fell in love with the opera.  The music was exquisite, the characters oh-so-relatable, and the love story sucked us in with surprising power. 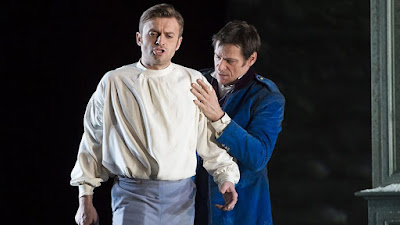 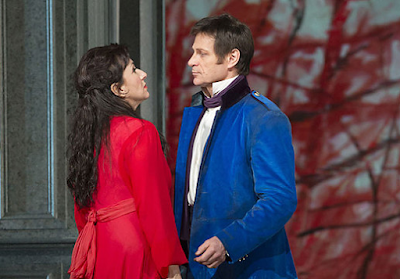 I promptly bought a translation of the novel to read.

And then the Met performed Onegin shortly thereafter released in the theaters as well on one of their HD broadcasts with another first rate cast:  Anna Netrebko as Tatyana, Piotr Beczala as Lensky, and Mariusz Kwiecien as Onegin.  Kwiecien is my sister's favorite baritone, much as Keenlyside is mine.  Both versions are fabulous, and I'm not sure which one I'd rather watch.  We each own our respective baritone's version on DVD, naturally, though it's often a coin toss that determines which version we watch. 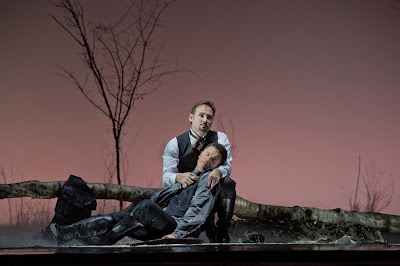 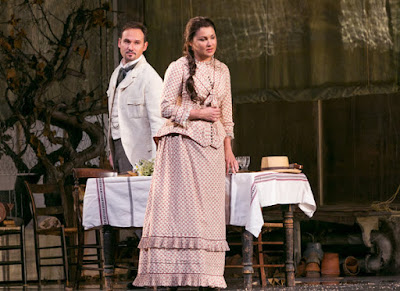 And then we found a movie version starring Ralph Fiennes as Onegin, Liv Tyler as Tatyana, Toby Stevens as Lensky.  And this version was equally as fabulous, just no singing this time.  But it captured everything so well, and because it's a movie, it has beautiful scenery, etc.  The movie version also ended up being more emotional for us than the opera!  This is all because of Ralph Fiennes.  The duel scene... holy smoke, the duel scene.  Fiennes put both of us in tears in that scene, where the opera versions just made us make sad faces at that point.  And it's not like either opera version wasn't moving, but the movie?  Wow.  Emotionally, this movie totally nailed that scene.

The basic plot follows a young bored nobleman (Onegin) who takes up residence in the country and becomes friends with a nice young poet, Lensky.  Lensky takes Onegin to meet his girlfriend, Olga, whose older sister, Tatyana, falls hard for Onegin.  She writes him a letter, pouring out her heart to him... and gets politely but firmly rejected and dismissed.  (This can be coldly done in some versions, but it's such an intriguing scene cuz Onegin is just brutally honest about their chances of happiness, he's not being deliberately cruel.  I'm endlessly fascinated by this story.)  Tatyana is, of course, devastated and crushed.  At her name day celebration, Onegin (now being a troublemaker) flirts with Olga and ends up causing Lensky to challenge him to a duel.  This does not go well, and Onegin is forced to kill Lensky.  He runs away for a few years, and when he returns to St. Petersburg and attends a ball, he sees the most beautiful woman... and then realizes it is Tatyana, no longer a young country girl, but the elegant wife of the prince.  Now it's his turn to fall hard, his turn to write her love letters... which she rejects.  When they finally meet, she tells him it's too late, she's married now and won't leave her husband, even though she really does still loves Onegin.  And he is left lost, bitter, and full of regrets. (Or as we good-naturedly like to translate his last line of the opera:  "My life sucks!"  Which is actually a fair line for many an opera character to use as the curtain falls.)

Ralph Fiennes plays a perfect Onegin.  Bored, dissolute, but caring under it all.  And Liv Tyler is so lovely and dreamy, with her romantic ideals and her constant books.  They make a good pairing for this version, well-matched.

(Love this shot of Tatyana sneaking away to find privacy and read books in a row boat.  I would do that.)

Eugene Onegin has helped my sister and I introduce multiple people to opera, several of which have become great fans not just of this opera, but of other operas we've shown them.  How cool is that?

Here's my favorite scene in the opera, this from the Met's HD version with Mariusz and Piotr.  This is where their friendship unravels, and the challenge is issued for the duel.  I love the part that starts 6:00 minutes in, where the challenge for the duel is accepted, and the two have a bit of a brawl.  I will often watch this clip on youtube, then switch over and watch the same scene, but the Keenlyside/Breslik version, cuz they have a more enthusiastic mini-brawl with some wrecking of furniture.  But that one doesn't have subtitles, and this one does, so... here's the conclusion of act 2 scene 1. 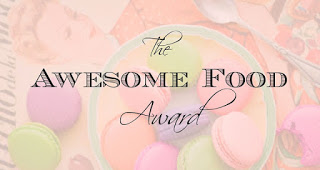 1. Thank the person who nominated you, as well as link back to their blog.
2. Answer the 10 questions provided.
3. Come up with 10 more questions that relate to food.
4. Nominate at least 5 people.
5. Let those people know they've been nominated.


Thanks for the tag, Hamlette!  I actually wrote this post back in early December... and then somehow never posted and forgot all about it.

1.  Would you like condensed milk or honey on your bread?  (Or both, but never mind the bread, like Pooh?)
Er... why on earth would someone put condensed milk on bread?  Honey, I can see, but milk?  It would become soggy and yucky.  Strange!  I would prefer my bread without either as toppings, thank you kindly, but I used to love hot (real) milk and honey as a drink when I was young.  Better than hot chocolate.

2.  What do you like putting on oatmeal?
Brown sugar, nothing else.

3.  Are there any foods you used to dislike, but now like?
Burritos.  I refused to eat them growing up (and missed out on apparently the best burritos ever from a restaurant that is no longer in business).  I started liking them in high school. Sadly, can't eat them any longer because of the wheat tortilla, but I still like them.  Although I still have "a real dislike of red beans," (all beans, really, but the movie quote is for red beans, so that's how my family always quotes it whenever the subject of serving me anything with beans in it comes up), so I only like burritos that do the pinto beans right.

4.  Are there any foods you used to like, but now dislike?
Chocolate.  Not so much dislike, as I simply have little taste for chocolate any longer, and so just don't eat it.

5.  Do you have certain foods you only eat around Christmastime?
No.  My family's Christmas meal is usually a repeat of Thanksgiving.  I don't cook or make anything unique to the season.

6.  Do you have any food allergies/intolerances?
Unfortunately.  Wheat and milk. I can drink lactose-free milk, but I stopped drinking milk back in college, so almost never touch it these days anyway unless I'm in the mood for tapioca pudding, and I don't miss it at all.  Wheat has become a huge problem.  Used to be it'd only make me ridiculously sleepy (as in I could not make it through a day without napping, I literally could not keep my eyes open).  Now, if I indulge in anything wheat-based, I get stomach discomfort that only goes away about two weeks after I stop eating wheat again.  The pain is bad enough that I've almost gone to the doctor, thinking something else was seriously wrong.  But nope, as soon as the wheat is out of my system, I'm totally normal again and all the pain goes away.  Needless-to-say, I've hit a point where I just steer clear of all things made of wheat.

7.  What is your favorite restaurant?
Cielito Lindo, at Olvera Street, for their fantastically, exquisitely, delicious taquitos.  It's the only thing my family has ever ordered from them, and we've been going there since the early 70's. 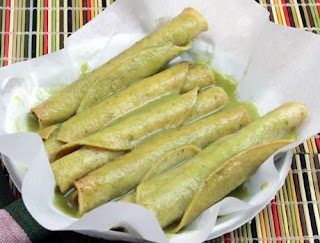 (Pic is from their website.  I'm including no other pics in this post, cuz, dude: taquitos.  There is no other food I could talk about that rivals the sheer joy these bring.)

9.  Do you put anything interesting in hot chocolate?  (I like chili powder in mine, for instance.)
I'd be surprised if I ever drank hot chocolate again, so no.  The only thing I ever liked in hot chocolate when I did used to drink it was marshmallows.

10.  Do you have a favorite cookbook?
The Game of Thrones website/cookbook has given me the most new recipes from a single source that I've tried and that continue to cook/bake regularly.  A few are now favorite recipes that are demanded often by my family (ie: the sherbet).