I am a dead-eye shot, shooting

Life continues to be super busy. I haven't actually watched a film since The Big Clock! Crazy! I have, however, managed to watch the first season of "The Tudors."

So, because I have zero content today and I haven't posted in ages, here's my answers to a fun meme involving movies and writing!


Name up to ten films that have had significant influence on your creative work.

In no particular order:

Ben-Hur - because of the ill-fated friendship storyline, and because Messala was the first fictional character I fell in love with whom my dad hated, and that forced me to really think hard about why I liked him anyway. Learning and exploring who Messala was and why he did what he did helped me understand areas of human motivation and need that I still use in character development today.

The Hunt for Red October - because it introduced me to Sam Neill, who is still the celebrity love-of-my-life, who influenced the creation of several novels, more than any other actor.

Star Wars - because that day I first saw it in 1977 changed my life and nothing in my life, creative or otherwise, would be where it is today without that film and its universe.

Where Eagles Dare - because it led me to Alistair MacLean and no single person has influenced me more in my writing than MacLean.

20,000 Leagues Under the Sea - because it gave me my lifelong obsession with submarines and beauty and dark characters.

Patriot Games - because I loved the book, and the movie sucked, and I learned quite a bit about stories exploring why the movie failed and the book succeeded. It also gave me Sean Bean, who has influenced nearly as many novels as Sam Neill.

Help! - because my first completed novel would not even have been started without this movie as a rough guide.

Mutiny on the Bounty (1935) - because of the beauty of the islands and that need to find a place like that, because of abused authority and the rise up against it, because of the juxtaposition of harsh life on that boat vs. idyllic life on the island. All themes that I took to heart thanks to Clark Gable and Franchot Tone. This is the only movie version to date that I like.

Tosca - yes, it's an opera, but even though I'd seen it and heard it a jillion times as a child, it was the 1979 movie version filmed at the actual locations in Rome, with Domingo, Milnes, and Kabaivanska that really cemented this story, characters, and emotions in my mind. Elements of Tosca continue to be reflected in most of my writing.
Posted by DKoren at 10:31 AM 1 comment:

I've been wanting to see this movie a very long time, ever since I found one of my favorite modern movies was based on it (No Way Out, 1987). No Way Out came out just after I graduated high school, when I was in the height of my Navy/spy/conspiracy obsession and this movie was made to order for that. I'd fallen in love with Kevin Costner in The Untouchables, and I thought he was great in No Way Out. Add in Gene Hackman, Will Patton, George Dzundza, and I thoroughly enjoyed the movie. 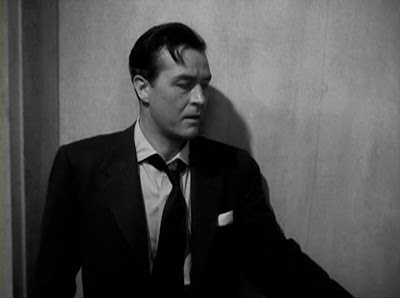 The Big Clock has the same basic premise -- innocent, framed man is put in charge of hunting himself down for the murder for his boss's mistress -- but that's about the only similarities. The Big Clock takes place at a publishing house. I have to admit, it took me awhile to get into it. The opening voice over was poorly written and set the wrong tone for me. The set up took far too long and didn't actually make me care for the characters involved. All surface, no depth, no heart. I didn't care about these people, as I'd cared about the people in No Way Out. But then, finally, it kicked into gear after the murder. From then on, it just kept getting better and better and better.

There were similar elements to No Way Out -- such as the eye-witnesses combing the building, the trusted second-in-command (George Macready in this case, Will Patton in No Way Out) covering for the boss, pushing hard and violently for results -- but they all played out differently and I really loved those differences. Ray Milland is married, and his wife gets to play an active role in events. I just loved how both Ray Milland and Charles Laughton's characters keep catching little things about the crime and trying to either expose or cover it up as they go. I loved Harry Morgan skulking about just aching to do some violence for his boss. And I loved the ending and how it all ultimately played out. Very satisfying. Charles Laughton is cold and precise and menacing and I would not want to work for his character here in any capacity. And he sports a truly awful and unnecessary mustache that belongs over in Kate's list here. 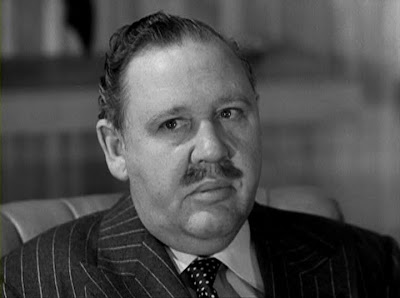 The Big Clock also has Elsa Lancaster in a priceless turn as a painter who can identify Ray Milland. Her character is hilarious, touching, and a little bit pathetic, and her sections of the movie were probably my favorites. The drawing she sketches to identify the killer is wonderful and brilliant. I love her more and more with every performance I see her in. 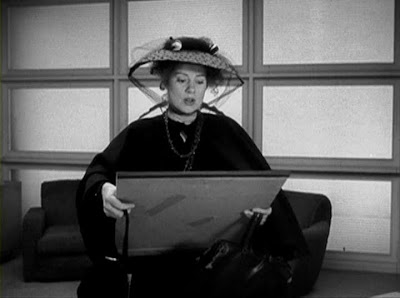 I couldn't actually say which film I like better. Both are good movies, and both have things that make them stand out from the other. I think I need to go find the book now and read the original!

Plus: Klaberjass alert!! Ray Milland goes to ask the two piano players to play him something, and one of them indicates the cards in his hand and says, a bit irritated, "It's klaberjass!" and Ray Milland dismisses that with a wave of his hand and tells the piano players, "Oh schmeiss, play me some music." I love it! (Schmeiss is klaberjass terminology for a bidding move to prevent the other player from getting to call trump and keeping trump in your own hand. However, it also indicates a weaker hand (since you didn't call it outright) and can backfire badly and get you set.) I wish people still played cards these days. 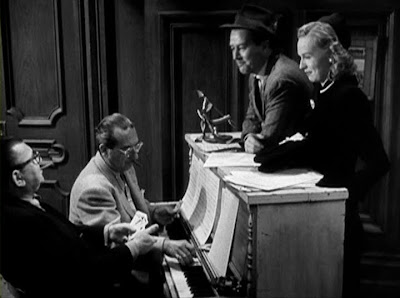