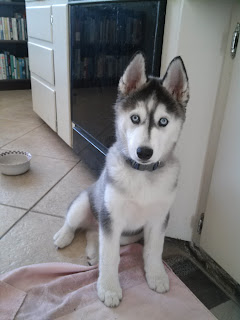 Ack, look how fast he's growing.  19 pounds this morning. 19!!!  He almost doesn't look like a puppy anymore, but has graduated to "young dog."

I've been taking him to "puppy play time," which Petco offers free several times a week to let puppies socialize with other puppies in a safe environment, with a trainer to help correct behavior and keep an eye on everything.  He loves it, and it's always interesting how if there's another Husky pup there, the two will gravitate right to each other.  My sister came with me to the last session, and she said Silver was both the handsomest puppy there, and the most regal.  He stands very proudly, in that classic show-dog stance.  I thought those dogs had to be taught that, but maybe some stand that way naturally?
Posted by DKoren at 9:00 AM 5 comments: 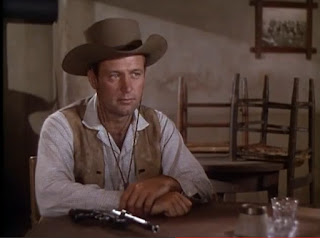 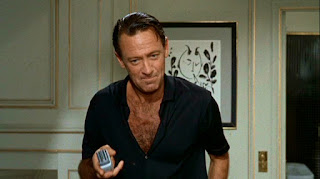 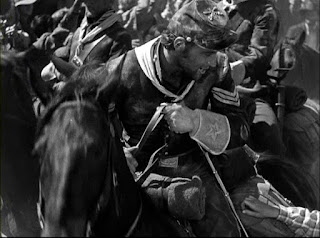 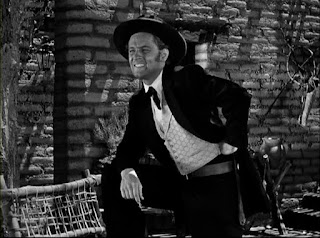 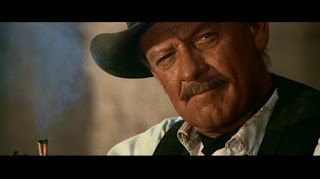 I was in the mood for some wackiness this past weekend, and that's exactly what this movie is:  wacky.  It's a light-hearted, quite zany WWII movie, with a cast I love:  James Coburn, Aldo Ray, Sergio Fantoni, and Dick Shawn.

The plot concerns an uptight by-the-book Captain Cash (Dick Shawn), ordered to take the remains of an exhausted company and capture the village of Valerno.  (This is set in 1943, in Sicily.)  The Italian soldiers there, under the command of Captain Oppo (Sergio Fantoni) are more than willing to surrender -- as long as they're allowed to have a festival that night first.  Naturally, Cash strenuously objects to this, but the offer of a peaceful surrender wins him over.  A gigantic village-wide wild party ensues that night.  The Italians get ready to surrender in the morning as promised, but things start going awry.  Things really go wrong with the Germans show up unexpectedly and capture the entire town.  Then the Italians and Americans have to work together before they're all executed at dawn.  This being a comedy, there's no doubt of the outcome, but it's how they beat the Germans that's so funny.

This movie isn't perfect.  The humor style isn't going to work for everyone.  And the festival drags and drags (though it's not without its moments).  On re-watches, I admit, I tend to skip right over that part. The section right after it, with everyone hung over and trying to deal with the aftermath and Major Pott and creating a fake battle is probably my favorite section, but I also love the whole end once the Germans occupy the town.  I mean you get Dick Shawn in drag, as just about the ugliest woman imaginable.  Makes me laugh and laugh.

James Coburn and Aldo Ray are, of course, my favorite parts of this movies.  They play Lt. Christian and Sgt. Rizzo, respectively.  They are hilarious without being outright silly, like some of the rest of the movie.  Aldo Ray gets to speak a bunch of Italian, which is awesome.  He spends a good portion of the movie in an Italian uniform that is too small for him (it'll stretch!), and that alone cracks me up.  I'm also extremely fond of Sergio Fantoni, who I know mostly as Captain Oriani from Von Ryan's Express.  He was one of my favorite characters in that movie, and I love him here too.  He's the perfect relaxed foil for uptight Captain Cash.

I spend a lot of this movie imagining some of this company hooking up in a couple years with Lt. Hanley and Sgt. Saunders in France.  Particularly as William Bryant is in this movie, as well as Kurt Kruger, and Horst Ebersberg, and Jay Novello.  It's hard not to think Combat! while watching this, as there's so many common denominators.

It also has an absolutely fabulous catchy main theme by Henry Mancini that I never tire of hearing:


Looks like Silver is far more interested in water than my previous Husky, who really never wanted to see water, ever.  This video was a couple days ago when it soared up over 90 degrees here.  The following day, it dropped to the 60's and was raining.  He was out playing in the rain, running back and forth repeatedly beneath the drips coming off the garage roof.  Think I'll pick him up a little wading pool for summer.

So far, he's been gaining about two pounds a week.  Yikes!  Growing fast.
Posted by DKoren at 7:49 AM 2 comments: 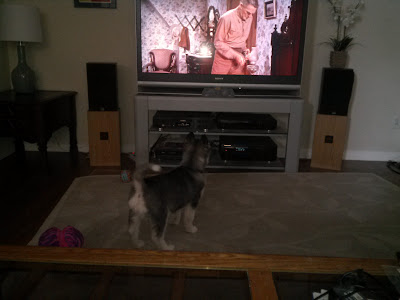 Silver is fascinated by the television.  I watched Randolph Scott Westerns all weekend, and Silver watched them with me. (Extra points for guessing which movie we're watching in this pic!) 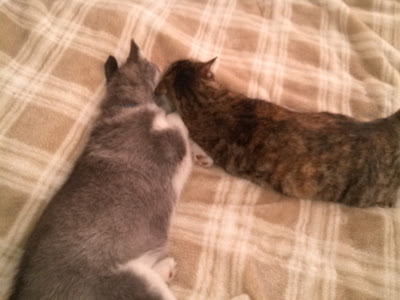 My Rosie cat loves Silver and will rub on him and clean his head.  He's slowly learning to be gentle, as who can not be nice to a mama cat giving you love?  He's now licking her back, though he still wants to play, of course.  Puppy.  Also, when I brought him home, he was smaller than the cats.  He's now bigger.