I would have liked this movie quite a lot except for Donna Reed's character.  She plays a thoroughly unlikeable type with a one-track mind (to get her share of some lost gold).  She's a tough woman, who has been abandoned and has been making her way alone through the world and doing quite well at it.  That's pretty awesome, actually, particularly for a fifties film, and I wouldn't have minded her at all if she didn't inexplicably change her tune three-fourths of the way through.  All of a sudden, for no good reason, she abandons her goal.  Okay, Richard Widmark would be a good enough reason for me... but it's not good enough in the movie because she doesn't even like him, sets him up to be killed more than once... then, inexplicably she starts liking him too.  She does an unexplained one-eighty in personality and goals.

This. Does. Not. Work.  This is bad storytelling, and it ruins an otherwise very strong female character.  I guess I should be used to this, because it happens all the time, but Donna Reed plays a colder customer than most, and so her abrupt change of heart is harder to believe. 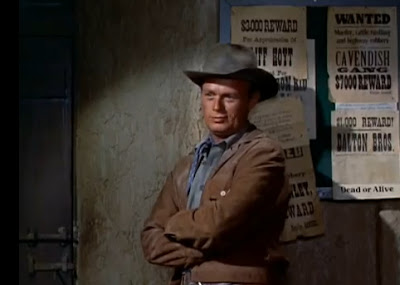 Ah well.  On the other hand, I still enjoyed the rest of the movie because of Richard Widmark, the plot, and the other supporting actors.  The plot was quite nifty.  There was an Indian massacre at a place called Gila Valley.  Five men died, one ran out on the others.  Those six men had been partners and had $60,000 in gold between them.  The gold is missing, and no one knows what happened to it or the unknown sixth person.  Jim Slater, Widmark's character, knows his father was one of the men and is trying to find that sixth man to both find out the truth and get revenge for his father's death.  Donna Reed's character is searching for husband, who was also one of the six.  It's a neat setup, and I really liked where it went.

John McIntyre was slyly evil as the head of one side of the range war.  Harry Morgan and Robert J. Wilkes play a violent pair of brothers looking for the gold and Widmark.  Barton MacLane plays a capable Army sergeant who has information Widmark and Reed need.  And William Campbell runs around as a hotshot gunslinger eager to gun down anyone who slights him. 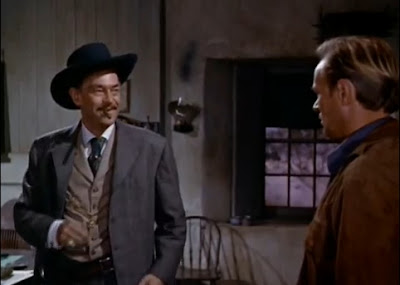 There's some nice action scenes:  a couple of Indian attacks, some shootouts, and a range war.  It has lovely on location scenery and a satisfying ending.  Someone just needs to rewrite Donna Reed's character so she's believable and this would be well-above average for me. 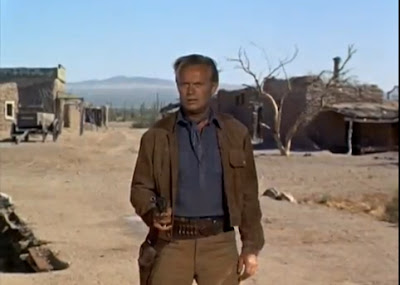 I attended the Lawrence of Arabia screening last night.  This is the first time I've seen Lawrence since I was a kid.  My family went to see it on the big screen back in the '70's.  I was probably 9 or 10 years old, maybe younger.  I remember being blown away, but over the years, I retained only three vivid memories of the film.

Those three memories were the opening scene (Lawrence crashing on his motorcycle), the death of the first kid in quicksand, and the death of the second kid when the detonator exploded.  I know, pretty depressing that my brain hung onto all the death scenes.  But they affected me greatly, particularly the last one, which haunted me ever after.  Not quite as scarring for me as the death at the end of The Green Berets, but close.  The rest of the film was a hazy memory of desert, camels, war, trains, and Maurice Jarre's music.

Thirty-some-odd years passed.  I never saw Lawrence in all that time.  I caught snippets every now and then, but that was it.  I owned the score on LP, of course, and played my tape of it over and over.  (Quick edit to add that hearing the music during the movie on the big screen, in context, was a completely different and awesome experience from simply listening to the music on record.)  But that record and those memories were my only real contact with Lawrence until last night, when I had my second viewing, also on the big screen.

May I say, wow.  I mean that multiple ways.  It's a big screen movie, meant to be seen like that, it looked great (though between the viewing last week of The Birds and this one, I'm getting annoyed with how dim the projection actually is.  Thank goodness there's a lot of sunlight/bright desert shots in this one.  But all of the night shows and even the darker indoors shots, were dim, faded, and difficult to make out the details.  There's an inherent brightness and clarity to real film, even in night scenes, that seems to be lacking in these versions).  But more than that, I realized how personal this movie was for me.  I may not have seen it for thirty years, I may not have remembered ninety-five percent of it, but I realized last night exactly how much of that first viewing imprinted on me when I was young.  It was extremely formative.  It influenced me in so many ways I can't even begin to explain it.  And I didn't even know it had been such a strong influence on my youthful self until I saw it again and recognized myriad things that shaped me.

It was quite eye-opening, and so very... I have no other word for it but "personal."  I'm quite glad I went to the screening by myself, as I needed to watch and experience the movie alone, and I needed to dwell on it afterwards alone.  I still can't entirely sum up my feelings.  Some movies aren't just movies, they're a lot more than that.  Lawrence, to my great surprise, is one of those.

As for the evening, I got there about twenty minutes before the film, and there was already a "making of" type film playing.  I don't know how much of it I missed, but I was quite bummed that I hadn't gotten there early enough.  We only had about 15 people in the audience, not nearly as many who attended The Birds, but I overheard some people saying that it had been sold out at the theater closer to them and they'd driven out here to see it because it was not sold out.  I guess attendance depends on which theater you are at?

I was quite amused to compare this movie to The Bridge On the River Kwai, which I do not enjoy and find dreadfully boring, where I absolutely loved Lawrence.  There are just as many long, loving (boring) shots of the desert in the first half of Lawrence as there are of the jungle in Bridge.  The difference for me is simply that I love the desert, I ache to go there, I find it beautiful.  I do not love the jungle.  I couldn't care less about the jungle, and I most certainly do not want to go there.  So what works for me in one movie and not in the other is due solely to my own taste in landscapes, nothing more.

As an adult viewer, I loved the story of Lawrence, and I really really loved Peter O'Toole's portrayal of him.  He's brilliant, and there's so many facets to the character as he plays him.  I'm extremely fond of non-verbal moments, and this movie gave me plenty of that.  Lawrence doesn't actually talk that much, and I love his silences more than anything else.  He conveys so much throughout -- pain, vulnerability, pride, stubbornness, fear, accomplishment. His Lawrence is so human.  And those blue eyes!! Yowza.

All the other actors are equally great.  Omar Sharif is amazing, so is Anthony Quinn, Anthony Quayle, Jack Hawkins, Alec Guiness, and Arthur Kennedy.  I love the two actors playing the two doomed teenagers, who stuck in my memory over everything else.  Everyone works so well in this movie.  The scenery is beyond gorgeous.

It was an evening well spent, and I'll be thinking about things for quite awhile.  I can't wait to see it again, but I really have no desire to break my big-screen streak on this one.  So, I will wait until it plays in the theater again.
Posted by DKoren at 10:21 AM 1 comment: