I grew up with cats, and probably because of that, I never encountered a movie cat I truly wanted. I guess they never quite measured up to the ones who already owned us. But dogs... that was another story. We didn't have any of those. I didn't get my first dog until I was an adult. So, I always watched for dogs in movies.

And again this is easy... because there is actually only one movie dog who ever had my heart, the one I still want to this day. That's Dog from from my third favorite movie of all time, Big Jake. 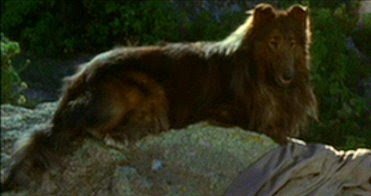 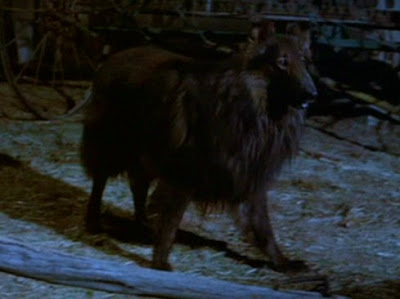 He's a collie (apparently from the Lassie line), but he doesn't have the traditional coloring... or rather he does, but they dyed his coat dark for the movie, which is half of what made him look so cool. Sadly, because it's dyed, it also means I will never ever be able to own a collie that looks like that. Sniff.

Dog was the epitome of what a dog should be to me. Beautiful, big, playful, tireless, quiet and patient, growls a soft warning when anyone approaches, attacks or does other helpful things on command, and is faithful to the end. I adore Dog. There have been other faithful dog companions in films, but none of them affected me quite the way Dog did. Because of Dog, my favorite canines will always be big, dark, and with upright ears. That's what a dog should look like.

One of these days I still might get a collie, though I wouldn't name him Dog, LOL! Most likely, I'd name him Batjac or Jake, but, of course, names depend on personalities, so who knows. My own dog right now is a grey/white Siberian Husky named Maximus. He fulfills a few of those traits I love in Dog, but mostly he's just big, beautiful, and playful (and gets along with the cats). No quiet warning growl, alas. He's got a loud howling bark he uses if anyone's comes around. :-D

Great post idea. I've always been a dog lover. I would have to say my movie animal choice would be Benji.

Awww, Benji's such a fuzz ball!

I will have to show this post to my daughter - she absolutely ADORES Huskies and wants one quite badly! But since we are living in an apartment, we can only have Lady Katheren, the cat, for now. But someday, when we find a house again, we plan on getting one. And your dog is GORGEOUS.

I lost my beloved Charlie (a border collie/retriever mix) last year (had to unexpectedly put him down after he collapsed and we found that a large cancerous tumor had burst and was poisoning him) and I still have a hard time when I think of getting a new dog. But someday...

Do you put animals in your fiction? I have put my Charlie into my current work - my way of keeping his memory alive.

Hi Melissa - Thanks for your compliments on Max! He is a good-looking dog. I'm so sorry about Charlie. I lost my first dog, Brinja, last year too, from something very similar, and I still choke up when I think about her. She was a half-Rott/half-Malamute girl.

Yes, there are animals in my fiction, though I haven't actually written my own animals in. But I do use my experience with them, that's for sure. I'm working on a novella now with a puppy in it. :-D

But I love the Malamute growl-howl! Westley did that too, and it's such a unique puppy sound.

Dog is awesome. I also love Sam from Hondo. John Wayne gets the best dogs!

Nothing wrong with the howl, but I'd love an unobtrusive warning from my pup, no a scare-off-intruder-all-by-myself kind of thing. Hee! I haven't seen Hondo yet. One of these days!

I had a sheltie that was all black and his name was Dawg. Best dog I ever had, and looked just like the dog in Big Jake. Every time I watch this movie it's specifically for Dog.