This is a is late review, considering I first saw the movie back in the middle of November.  And then saw it three more times.  With the whole family each time.  My brother-in-law hates going to the movie theater nowadays.  It's always too loud, too full of rude people... he's seen this one three times in the theater already.  My dad, too, almost never goes to see modern movies in the theater.  Not only did he go to see it, but he wanted to go see it a second time.  My mom's already seen it three times and is anxiously awaiting her next viewing.  My sister doesn't usually like war movies, and she's seen it four times.  My nephew, well he declared it his favorite movie, and he's been playing a couple different WWII flying games ever since.

It's just one of those movies.  It works for my entire family, on so many levels.

Modern movies about WWII can be problematic.  If there's one thing I cannot stand, it's filmmakers putting modern attitudes/messages/whatever into historical movies.  They play wrong when that happens.  This movie is amazingly free of modern BS.  In hindsight, this is actually obvious from the movie poster.  It's such a lovely throwback to old school movie poster styles. 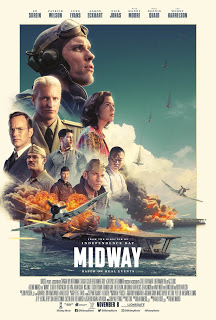 What do I love?

The characters (and the actors who brought them alive).  This movie has a fine cast, and everyone works exceedingly well in their roles.  The straight-forward storytelling.  No added romances, no cooked up conflicts between characters simply for the sake of it. The beautiful crisp cinematography that lets you feel like you're in the cockpit of a dive bomber without ever confusing the viewer as to what we're seeing.  The middle of a pitched battle, and everything is still crystal clear and easy to follow.  The accurate history, for once.  The pacing.  The short summary info at the end of the movie on what happened to the characters.

Favorite parts:  Best and Dickinson's friendship throughout.  Best sitting on his daughter's bed.  All the dive bombing runs.  Every scene with Bruno.  Every scene with Doolittle.  The downed Hornet pilot cheering everybody on.  The fact that they show the crew policing the flight deck.  Layton and Rochefort's silent exchanges when Nimitz visits Hypo.  John Ford on Midway.  All the rest of the movie.  LOL

Okay, really, there isn't anything I dislike about this movie except the movie previews we've had to sit through in front of it, and that's nothing to do with the movie.

Midway has put me back in a WWII mood, and I had to re-watch A Wing and a Prayer and The Purple Heart, both Dana Andrews movies, both released in 1944.  The former is about the Battle of Midway, the second is a fictional account loosely based on the trial of some of the men captured from Doolittle's raid.  I also watched two WWII documentaries on Netflix, WWII in Colour and Five Came Back.  The latter is a documentary on five of the big name Hollywood directors of that time, (Frank Capra, William Wyler, John Ford, George Stevens, and John Houston) and their contributions to the war effort.  It's quite sobering and inspiring at the same time.  I learned a lot about these famous directors.  The neat thing is Netflix also has the documentaries they made during the war available to watch too.  I watched John Ford's Battle of Midway first, but I'm working through all the others as well.

I will probably see Midway a couple more times before it finally leaves the theater, because this is one that really needs to be seen big screen.
Posted by DKoren at 9:53 PM