So, here are my answers to Kate Gabrielle's desert island themed questions, (originally from a Liebster award post). These were so much fun I couldn't resist answering them!

1. If you were stuck on a desert island with one actor, who would you pick?
Hugh Jackman.  I actually cycled through quite a few actors in my head before settling in on Mr. Jackman, because he seems to be the exactly the kind of personality I'd want with me if stuck on an island.

2. If you were stuck on a desert island with one actress, who would you pick? (Note - this is not necessarily your favorite actor/actress, but someone you'd want to spend months, years, possibly the rest of your life eating coconuts and building sandcastles with)
Barbara Stanwyck, because she's smart, resourceful, and I'd never tire of talking with her.

3. If you were stuck on a desert island and could only watch one movie on repeat for the rest of your life, which would you pick?
Aliens (1986) or Indiana Jones and the Temple of Doom (1984).  Either one.  Wouldn't matter.  They're two of the few movies that do not require me to be in a specific mood to watch them, and they never get old, and most importantly, they aren't worn out.

4. If you were stuck on a desert island with any movie character, who would you pick?
Alan Grant, from Jurassic Park. 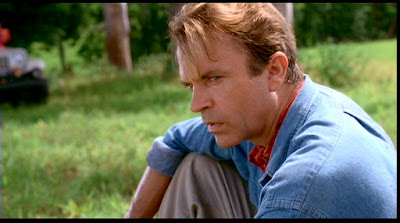 5. If you could watch a movie with any two actors/actresses stuck on a desert island together, who would you pick? If you've got some free time, elaborate a bit on the plot!
I'm not fond of survival-themed movies, in fact they rank up with horror and mysteries as my least favorite genres.  So this would have to be a desert island movie with a different type of plot.  Since this is me, it's going to have to be action/adventure oriented.  And I'd make it fantasy or sci-fi, because who wants the real world?  Let's go with fantasy, cuz then there can be magic and treasure and maybe a dragon and a volcano, of course.  There must be a volcano.  And... and... and...

Okay, really, I got nothing.  Seriously.  I've been stuck on this One Question for like FOUR months now, because I can't come up with a darn thing.  My brain goes to Hell in the Pacific, or Mysterious Island (bring on the giant bees!) or the Crusoe television series (which, do I file on the shelf under my Sean Bean DVDs or my Sam Neill DVDs??  This is a problem, people, a problem! (though, in case you were wondering, it's in the Sam Neill section, because he has the bigger role in the show, and my heart will always belong to him first, but that doesn't mean it still wasn't a problem!))... 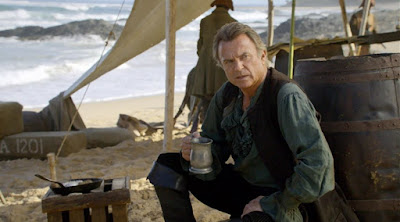 And... where was I?  Oh yeah, I keep thinking of desert island movies already made and my brain gets stuck there.

So, I'm completely cheating on this one and stealing my sister's answer. (I tend to always ask her these type tag questions while she's out and about to keep her (and me) entertained.)  She said she wanted to see a movie with Gary Sinise and William Shatner on a desert island, and I think that's a blooming brilliant combo.  I'd pay real money to see that.

6. Who is the last actor you would ever want to be stuck on a desert island with (cough, Tyrone Power, cough)? The utterly, teeth-gratingly annoying Big Bang Theory guy who plays Sheldon.  I don't even remember his name and can't be arsed to look it up.  The way he talks, I wouldn't survive one hour with him, let alone indefinitely.

8. If you were stuck on a desert island with a movie cook, who would you choose -- Felix from Christmas in Connecticut or Mildred from Mildred Pierce? Who would make the most out of all the coconuts and tree bark?
Felix, most definitely.  Felix is amazing and wonderful and sweet.

9. If you were stuck on a desert island with me, what movie would you force me to watch? I can't get away! I can't escape! I HAVE TO WATCH IT!
Hm. I would have picked Kiss Me Deadly, but Millie took care of that for me! So I'm going to say that Alain Delon movie you posted about, cuz I really want to see it and you could share it with me. (Really, this is just an excuse to re-post this picture...) 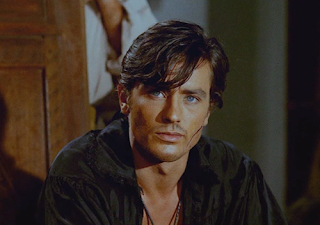 10. You're on a life raft with Herbert Marshall, Joel McCrea and Laraine Day but your weight is sinking the raft. Do you: a) sacrifice yourself to save these three amazing actors or b) push one of them into the water. If you chose b, who did you push and why?!
I don't see why we can't alternate who's in the water so we can all hang on a little longer.  At least until the sharks come.  Well, then... I guess it's just farewell and adieu to you, fair Spanish ladies.

11. If you could choose any movie animal to be stuck on an island with, who would you pick? Some ideas -- Asta, Lassie, Pongo, Perdita, The Pie, Cat (from Breakfast at Tiffany's)
Pascal, from Tangled.  Mostly because I wouldn't have to worry about feeding him like I would a dog or larger animal. Having to worry that an animal might starve to death would be unbearable. There are lots of insects on an island so no worries about him, and Pascal is smarter than he looks. 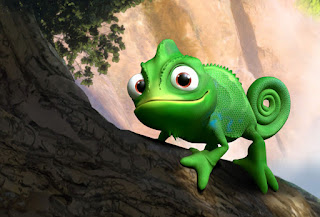 So, there you have it.  Much delayed, much thought about... but finally posted.  Please feel free to grab these questions and post your own answers, as I'd love to see some what other people pick!  Hamlette's answers are over here, if you'd like to read some more fun answers about with desert islands and movies!
Posted by DKoren at 8:57 AM