Happy Thanksgiving everyone!  Hope you all had a good time with loved ones and great food.

Hamlette tagged me for this one.

2.  What's your favorite period drama series?
Mini-series?  Or television?  If mini-series, Shogun still wins hands down.  If television, then I'm going with Lonesome Dove: the Outlaw Years.  Love the characters oh so much, and some of those eps were so darned well-written.

4. Anne of Green Gables or Little Dorrit?
I have not seen either, so neither.

5. Your favorite period drama dresses?
All of Kate Winslet's dresses in Titanic
Deborah Kerr's ballgown in The King and I
Mitzi Gaynor's party dress in South Pacific 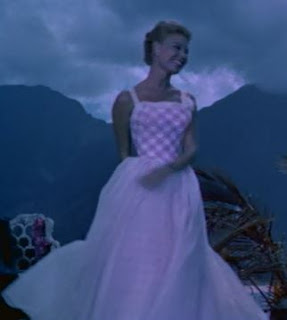 
7. If you could join a royal ball, which dress would you wear? (pick a period drama dress)
Ann Miller's dress from Easter Parade!  The movie was made in 1948, but was set in 1912, and while maybe not entirely a drama... I'm counting it because I've always wanted this dress.  And we already know it's perfect for dancing in! 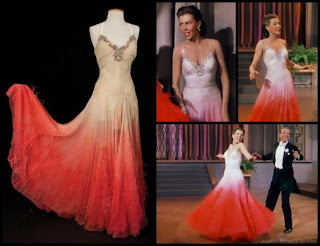 8. What's your favorite Jane Austen movie?
Sense and Sensibility (1995).  So far, this appears to be the only Jane Austen movie/story I genuinely like the characters in, and I love the actors in this one.

9. Downton Abbey or Call the Midwife?
Have not watched either.

10. Sybil Crawley, Jenny Lee, Emma Woodhousee, or Marian of Knighton?
I have no idea who Jenny Lee is, do not like Emma nor that particular version of Marian, and, even though I haven't watched Downton Abbey, since Sybil Crawley is played by Jessica Brown Findlay and I dig her from Winter's Tale, I'm picking her by default!

11. Which couples in a period drama do you like the most?
Indy/Marion (Raiders of the Lost Ark)
John Thornton/Margaret Hale (North & South)
Tristan/Isobel (Legends of the Fall)
The Raisuli/Mrs. Pedecaris (The Wind and the Lion)
Blackthorne/Mariko (Shogun) 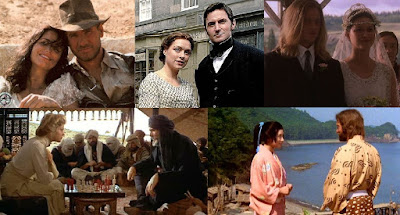 12. And last, which period drama villain do you like the most?
Since we got to list more than one favorite character, I'm doing the same here:
Rene Belloq (Paul Freeman, Raiders of the Lost Ark)
Messala (Stephen Boyd, Ben-Hur)
John Fain (Richard Boone, Big Jake)

How fun! I really enjoyed Downton Abbey, though I'm glad they ended it when they did as it started to go off the rails.

Have you watched Poldark? I LOVE it. One of the better period dramas out there. I'm also watching The Crown on Netflix. It's very, very good.

Please feel free to do this tag yourself! I'd love to read your answers!

My sister gave me Poldark on DVD for my bday, but I haven't watched it yet. I did see the first ep online, but I've been waiting for a rainy day, as I knew once I started the series, I'd want to watch the whole thing in one go. Very excited to see it!

Costner's Wyatt really did remind me of you in some ways.

And you know, I can't think of Belloq, Messala, or Richard Boone without thinking of you and how much you like them.

Yeah, Costner's Wyatt is the only cinematic Wyatt I relate to. Hee. So I get Robards' Holliday and Costner's Wyatt! I'm so down with that. (And you get Garner's Wyatt and Val's Holliday. I always associate the latter with you. :-D)

And LOL! I'm cool with that too. I do love those three immensely. I forgot to say on your blog how much I liked your villain choice.

It's so perfect! We get our own personal Wyatts and Docs. I don't relate to Val's Doc like I do to Garner's Wyatt, but I get the hugest kick out of him.

I was going to go with my old standard villain choice of Calvera, but then I realized that duh, Ben Wade is totally a villain, and while I just have a great affection for Calvera, I actually have love for Ben, so yay! I finally have a really great answer to the 'favorite villain' question!

Interesting choice there between Little Doritt or Anne of Green Gables. You've never seen the TV miniseries of Anne with Richard Farnsworth? It's good!

Nope, never seen it. Never really crossed my path and never seemed like my type of story, so I just didn't pursue it. I will have to check it out at some point, as so many people do seem to love it!

Shogun! Shogun! Mariko & Blackthorne! And The Raisuli & Mrs. Pedecaris!! I'm sooooooo with you on all these!! Huzzah, happy holidays, & bonne viewing!!

Yay! Nice to meet someone else who loves those two pairs as much as I do! Thanks for stopping by and happy holidays to you as well!