I watched this Western with Arthur Kennedy, Marlene Dietrich, and Mel Ferrer, and directed by Fritz Lang, on Amazon prime... and um... wow.  That's not necessarily a good wow.  More like, what did I just watch?  Ranch Notorious is a very strange viewing experience. 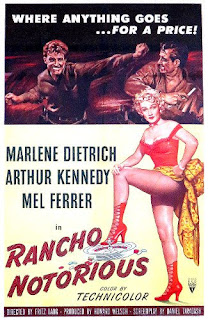 This is movie that doesn't quite know what it wants to be.  It has a good cast saddled with a standard revenge plot, but with some other character arcs and settings that should have elevated it.  This should have been a good movie... and it is just a head-shaker instead.

Let's start with the opening title song. I'm afraid it doesn't stand up to time's passage.  It is cheesy and silly.  It would be okay if it were just a theme song, but it turns out that this song continues throughout... it's not just a theme song, the singer ends up being a narrator who moves the plot along.  Silence would have been better.  It's just jarring.

But then the movie gets serious, and we meet Arthur Kennedy's character Vern and his fiancee. They share a nice happy moment.  But he heads out and two robbers arrive in town.  One fancies the fiancee... and yeah, that ends in the worse way possible.  Vern swears revenge and takes off to find the men.  Annnnd, the narrating singer is back.  And then, as Vern keeps searching for the murderer of the love of his life, he keeps meeting people who tell him stories about Marlene Dietrich's character, Altar Keane (!).  Now there's a name for you!  It is very clunky storytelling.  Worse because some of the flashbacks show stuff the teller isn't there to see.

Finally, Vern meets up with Frenchy (Mel Ferrer).  Vern's desperate enough to break the law to get to meet Frenchy, so Frenchy can lead him to Altar Keane, where he hopes to find info about the murderer.  We finally meet Marlene Dietrich in real time.  She runs a safe house for outlaws.  They give her ten percent of whatever illicit gains they've made, and she provides sanctuary.  Now, this is quite a fascinating setup.  This is cool.  Particularly as the murderer is indeed there, taking advantage of the safe house.  All these characters thrown together... this part should shine.  It doesn't.  It falls weirdly flat.  I think we just don't know enough about the characters to care about them, so all this promising stuff goes nowhere.

So, this was a movie full of potential that just sort of comes apart at the seams.  I watched this mostly because Arthur Kennedy was in it, but sadly, not even he can save this one. 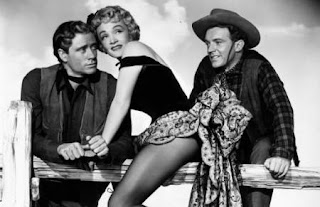 This has been an entry for the Legends of Western Cinema Week, hosted by Heidi at Along the Brandywine, Hamlette at Hamlette's Solioquy, and Olivia at Meanwhile in Rivendell.  Check here for the master post.  Lots of good posts listed here if you love Westerns!

I usually love and admire a Fritz Lang movie. I practically worship Arthur Kennedy and Marlene Dietrich. I have never been able to make it all the way through Rancho Notorious.

Yeah. I'm surprised I made it all the way through, myself, but Arthur Kennedy is one of my favorites, so I kept on plugging through it. Really not sure what the filmmakers were aiming for with this one.

Oh my goodness. This sounds even worse than Forty Guns. But better than Heaven with a Gun, so that's saying... something.

I found out, that taking herbal treatment is the best to get rid of hpv as soon as i feel the symptoms of hpv is appearing, i took the healing process by contacting Dr onokun for natural treatment it works wonders, amazingly ever since I had the herbal treatment i have not feel these horrible disease anymore and my doc told me the virus is gone, i am glad i finally got cured out from this horrible disease. every hpv or herpes patients should also get in touch with this herbalist Dr to get ride of these disease forever his email address; dronokunherbalcure@gmail.com

Hello Everyone out there,I am here to give my testimony about a Herbalist doctor who helped me . I was infected with HERPES SIMPLEX VIRUS in 2016, i went to many hospitals for cure but there was no solution, so I was thinking how can I get a solution out so that my body can be okay. One day I was in the river side thinking where I can go to get solution. so a lady walked to me telling me why am I so sad and i open up all to her telling her my problem, she told me that she can help me out, she introduce me to a doctor who uses herbal medication to cure HERPES SIMPLEX VIRUS and gave me his email, so i mail him. He told me all the things I need to do and also give me instructions to take, which I followed properly. Before I knew what is happening after two weeks the HERPES SIMPLEX VIRUS that was in my body got vanished . so if you are also heart broken and also need a help, you can also email him at drgodwinsolutionhome@gmail.com or whatsapp him number: +2348054615060 Contact him today
https://drgodwinsolutionho.wixsite.com/drgodwinsolutionhome