This disc contained three films: Riding the California Trail, Robin Hood of Monterey, and King of the Bandits. The first one was the best, but that's mostly because the last two changed format. Riding the California Trail technically belongs with the vol. 1 movies, where Cisco has his gang and the stunning Palomino horse, and Baby as his sidekick. In the last two films, there's no more gang, he's got a different Palomino (still beautiful, but not stunning like the other horse), and he's traded Baby in for Pancho. Granted, the latter is just about the same character with a different name, but we've changed actors yet again to do so, and this guy is written as even more of the comic relief than the last one.

The final two movies were still quite enjoyable for me, again, just to watch Gilbert Roland having so much fun. Robin Hood of Monterey had Evelyn Brent in it as a scheming money-hungry woman, which was quite cool. King of the Bandits had Gilbert Roland jumping off his cantering horse onto a moving stagecoach. I'm surprised, but glad they let him do his own stunt as it really makes it a cool scene. I kept expecting the camera to cut, but nope, it stayed with him in one nice shot all the way into the stagecoach's driver's seat. Gotta love that. Cisco was even more laid back in the latter two movies, doing even more wisecracking, some of it in Spanish, which I wish I understood. He's even got time to read poetry now. Actually, in all six films, we never actually see him commit any crimes. Makes me wonder how he actually got his name on all those wanted posters the local law enforcement keep getting a hold of. 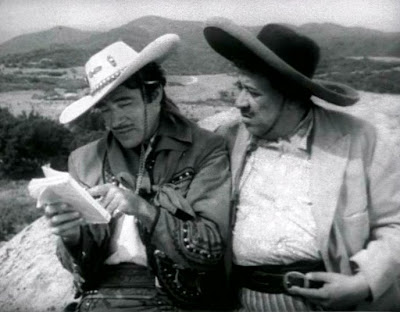 Also watched Beneath the 12-Mile Reef this morning. Beautiful underwater cinematography, great Bernard Hermann score (and I know the main title so well, only I'm not sure from where. Maybe it was on one of the Bernard Hermann compilation records I had growing up? Must check.) Pedestrian plot (Romeo and Juliet... again? Do we hafta??) with a few nice moments, and a 2-minute change-of-heart ending that I just don't entirely buy. Gilbert Roland and Richard Boone made the movie for me... only neither were in it as much as I wanted, though both dominated the screen when they were there. And unfortunately, despite the movie description listing each as playing the head of rival sponge-diving families, they had one, one, scene together. And they were relatively nice to each other. Dude, that's just not fair. We're talking two tough screen hombres and... no head butting, no fireworks, no fist fights? Cheated!

Most of the movie revolves around Robert Wagner's character. It's funny, but I've never had much reaction to him in any of the films I've seen him in. I neither like nor dislike him. He's simply there. There's absolutely nothing wrong with him, and I thought he was perfectly fine in this movie, he's just overshadowed by the stronger, more charismatic personalities of Gilbert Roland and Richard Boone. Peter Graves is also in the film... he appears to have played quite a few unsavory characters in his youth, this one among them. I really wanted something bad to happen to him... alas, got cheated there too.

And for the moment, (pending how strong my willpower is) that ends my Gilbert Roland spree, so I can get back to more serious work on the novel.


Haha, so funny about Robert Wagner! I've always felt EXACTLY the same way about him! I've always thought he seems to do better in films with lots of costars (The Pink Panther, Harper). Doing the lead just doesn't seem to work.

Hee, that's so funny that you feel the same way about Robert Wagner! He's fine, just... unengaging? And I think you're right, he does do best in films with lots of co-stars!

The Gilbert Roland Cisco Kid movies are definitely fun. If you like Zorro but want him a little less clean cut, then Cisco fills the bill. I was originally thinking of checking out the other Cisco Kid movies, but I think I'll wait awhile. Don't want to see other actors in the role just yet.

Totally agree with you both on Robert Wagner! He's just... unmemorable. I mean, I just watched Harper last month, and can I remember a single line uttered by his character? Nope. All I remember is I think he was the Glamour Boy Pilot. I think.