Well, there's not that much that's desperate about this journey. There should be, but Errol Flynn and Ronald Reagan are having way too much fun single-handedly trying to win WWII. It's not all a light-hearted romp -- the long car chase at the end is quite nicely filmed and rather nail-biting -- but this film is pure "We laugh in the face of Danger! Hah-hah!" Definitely check any sense of reality at the door.

That's not necessarily a bad thing, it just depends on what you're looking for. I went into this film thinking it was going to be serious and was initially disappointed... but now I know better. This is a movie to watch when you want an exciting fantasy adventure. The plot's simple enough. Errol Flynn kicks off the story when he can't abide playing it safe. No, he's got to disobey orders and take his bomber down beneath the clouds to get the German target they're after, and promptly gets them shot down waaaaaaaay behind enemy lines. Kills their captain and a couple other chaps, and Flynn and the rest of the surviving crew go on the run. They don't make it far before the Germans capture them, but they don't stay captured for long. The rest of the movie follows their journey to get back to England. Things are complicated by a German Major (Raymond Massey, who's good here, but I can never quite get past his Arsenic and Old Lace role) personally after them because they stole his plans for some new messerschmitt factories, a side-trip to blow up a chemical factory in Berlin, because, really, when you're on the run for your life in enemy territory, you must strike a blow for the Allies while you're there. As Ronald Regan's character declares with a grin: "Look at us! We're a five man invasion!" And they are. They wreak havoc as they escape Germany, and nobody even ever stops them and asks them for their papers.

The only voice of reason in the film is Arthur Kennedy, who is young and cute and oh so very serious. He was the best part of the movie, and the only character I could relate to. He's a needs-of-the-many-outweigh-the-needs-of-the-few type of guy. He's Mr. Practical/Realistic. He's okay with their wounded comrade giving himself up to the Germans so the rest of them have a better chance to escape. Not Flynn, oh no, he must go rescue the poor chap, we don't leave our people behind, and all that. Arthur Kennedy likes to point out to Errol Flynn that there's more at stake, and Flynn likes to disparage him for Being Serious. They really do have some Serious discussions. Some viewers might think it bogs down the adventure, or that the dialogue's too tailored to get the home audience charging down to the recruitment office the next morning, but I liked whenever Kennedy and Flynn or Reagan butted heads over what it's all about. Brought a little balance to the film and gave me that more serious edge I was looking for.

Kennedy: "We haven't got the right to risk our getting back on side issues. Weigh the values."
Flynn: "That's what comes from having been a bookkeeper. You add everything up. Plus and minus. Then you stick in a decimal point and let it take all the fun out of life."
Kennedy: "Fun? I didn't get into this war for fun or adventure or because it was expected of me. I got in because it was a hard, dirty job that has to be done before I can go back to doing what I like. Before a hundred million other people can go back to doing what they like. It's no bright game to me." 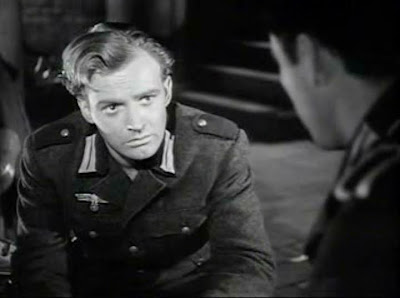 At least Flynn has the good sense to admit a moment later he knows full well he's being reckless, and his logic makes sense to me. "I figure we have about one chance in 10,000 of ever getting out of here," he reasons. "If we are going to get knocked off, I just want to leave a couple of bouquets behind. To be remembered by, that's all."

I started liking his character more after that point. Sure, it may all be 1942 propaganda, but it works for me on a story/thematic level too.

The journey may not have been entirely desperate, but it was pretty suspenseful in places. I spent most of the film afraid Arthur Kennedy's character would get killed. The action in the last half is quite exciting. I really did dig that car chase. It was a good one. Maybe I just love watching those old cars and motorcycles tearing around on dirt roads. The Germans speak German with no subtitles, and I always love that. The actors are all good and look like they're having a grand old time. (Is Alan Hale ever NOT having a grand old time in any of his movies??) And for the fun factor, it doesn't get much better than Ronald Reagan, while being interrogated, pretending to cooperate and completely flamboozling Massey's character with some wonderful, made-up nonsense about how American planes can fly at high altitude. Priceless!
Posted by DKoren at 10:42 PM

You had me at: "Errol Flynn and Ronald Reagan are having way too much fun single-handedly trying to win WWII."

"This is a movie to watch when you want an exciting fantasy adventure."

That's pretty much the summation of every Errol Flynn movie I've ever seen :-)

Hi Millie -- they do rather enjoy themselves, that's for sure! Hee.

That cracks me up, Rachel. And yep, you're quite right. I've been dying to see Captain Blood this past week. It was always my favorite of the Errol Flynn swashbucklers, and now that I'm on a pirate movie kick, I really want to see it again.