I finished the final draft of my Combat! fanfiction story "In Little Stars" last week. Nice to have that one out of my brain, as it was started in January 2008, and it was emotionally taxing. It went through four drafts during that time, more than my usual for fanfic, ending up at nearly 18,000 words. But then I can rarely write short fanfic stories. My brain still prefers to work in "hour-long" episode formats when it can. I'm also glad this one's done because I have just two more fanfic stories left in me, and one's already done (first draft-completed during last year's nano), and the last story is two-thirds written. And that nicely leaves most of my free time available for the new novel.

The new novel is shifting, growing, even as I still work on chapter one. Hero's voice continues to elude me, but that's okay. With the overall growth it's doing, I'd rather keep everything fluid and open right now. I'm waiting for one more piece to click in place. When it does, I'll be ready to jump into it more firmly. But I've had that lovely bouncy excitement every day as I wait for work and daily commitments to end so I can work on it. I love that feeling!

On the movie front, watched Barbary Coast with Edward G. Robinson, Miriam Hopkins, and Joel McCrea. Meh. Not bad, not good. Just... meh. Edward G. was awesomely cool as ever (dig that earring), and Joel earnest and love-lost and spouting poetry while making horribly, terribly bad decisions. Walter Brennan adds suitable color and made me grin every time he appeared. Walter Brennan is just the best, he really is. When he gives the money he stole from Joel back to him, he's priceless! Brian Donlevy's lurking about as an oddly dressed thug... it's funny, I always think of him as a rather imposing man (a lot of that is his don't-mess-with-me attitude and the tough characters he plays), but you know, he isn't. Particularly next to Joel McCrea. Okay, that's not truly fair, cuz Joel makes most other actors look small, but still. Donlevy's still young and thin here too... and that outfit. Gadzooks, he needs to lose the unflattering, high-necked outfit. Really. Badly.

And now, to Nicole at Classic Hollywood Nerd, a very very HAPPY 20th BIRTHDAY!!!! I enjoyed a slice of Stir-Crazy Cake this evening to celebrate! (A truly yummy cake, easy to make -- very highly recommended!) Hope your birthday is a fabulous one! 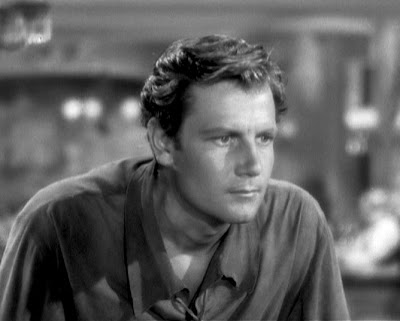 Joel McCrea in Barbary Coast, broad-shouldered and handsome, as always!
Posted by DKoren at 9:54 PM

Thank you for the birthday wish!!!

Edward G. Robinson with an earring? I think that alone makes this a must-see. ;)

I've had that lovely bouncy excitement every day

Can't wait to hear what you think of Road to Perdition! Loved that one enough to buy it. It's mostly what's responsible for me not liking Jude Law much, though. But love JJL's little role! Haven't managed to find a Vic pic in any of her scenes yet, tho. Maybe you'll spot one.