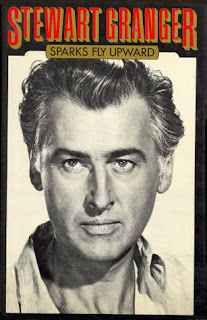 I'm not much of a biography reader, but after reading this interview on TCM MovieMorlocks blog, I knew I wanted to read this book. This quote from Stewart Granger in particular just really spoke to me:

"Even the happy periods are unhappy to write about because you say to yourself, 'Why the hell didn't I know I was happy then?'"

And I LOVED this book. Really loved it. He may have described writing the book as torture, but he has a very easy writing style to read, and his way of describing things is often very funny. I laughed out loud. A lot.

The only problem with this book is that it ends. And he leaves off his story in 1960, right after he made North to Alaska. Perhaps there was going to be a second book, but alas, it was never written. Too bad, as I was so not ready to leave his world and would happily have read about the next set of years.

He has many adventures, but I think what I loved most about him is how normal he was, and how much about him I could relate to, such as our shared problem of a nervous stomach, and how many things scared him. I think I might even have loved his stories about non-Hollywood stuff more than the movie-related stories. Such as his early life, and buying a ranch in New Mexico, then Arizona, and the trials and tribulation of learning to raise cattle. I commented in my last post on how happy his character was in North to Alaska. Boy, that couldn't have been farther from his real mood at the time that movie was filmed (going through divorce from Jean Simmons), which only makes me appreciate that exuberant performance even more.

He had great stories about the crazy filming of King Solomon's Mines. About exploding planes and grabbing a cobra for a shot... only to find out its fangs were not taped back like they were supposed to be. Yikes! I was very impressed with how Jean Simmons took Howard Hughes to court -- and won! Some of the sad parts of his story broke my heart. Life is not always kind to any of us, that's for sure.

I actually don't have the book in front of me right now (I forced it, er... lent it... to my sister, after I loved it so much and I really wanted someone else to read it... even if she has no clue who Stewart Granger is, LOL!), so I can't quote some of my favorite sections right now. But there were a lot. From memory, I think my absolute favorite bit was when he first arrived in Hollywood and Cary Grant took him to the Farmers Market. This was after the war, but food had still been heavily rationed in England, and Stewart Granger just flipped out over all the food on display for sale at the Farmers Market. He bought all this stuff he couldn't possibly eat all of, just because he could and he'd gone without for so long, with a bemused Cary Grant looking on wondering what the heck. I also loved a bit about him commenting on the static electricity and getting painfully shocked by anything metal. I forget that it's not this dry elsewhere in the world, and that that might actually be a new experience for someone, not something you live with.

Anyway, I'd rank this as the most enjoyable autobiography (or biography) I've read, and it really made me like him even more as a person than just the handsome, swashbuckling actor from the movies. Highly recommended for anyone interested in either Stewart Granger or old Hollywood.
Posted by DKoren at 6:15 PM

I always enjoy a good recommendation, particularly a good autobiography or memoir. The anecdote about Granger visiting the Farmers Market alone makes me interested in checking this book out. I will keep my eyes open for it the next time I'm in the library.

I'm surprised to hear how ordinary and vulnerable he was. I don't get that vibe at all from his performances. I guess that's why they call it acting! I really want to read this book.

What an intriguing choice for a title! It's from Job 5:7 -- "For man is born to trouble, as the sparks fly upward."

As a reader of many hollywood bios, this is the most interesting one of them all!!

This auto-biography was so good and so interesting, honest, funny and highly informative, that I had to read it twice. Fantastic! I've now been watching his movies and there were many I didn't know he made, that are simply wonderful and charming. I'm now a Stewart (Jimmy) Granger fan.

It really is a great auto-biography. I will be reading it again, myself. And I'm overdue to watch some of his movies. Thanks for stopping by! Stay safe.