The last time I saw this movie was somewhere in the early 80s.  It was the first and only time I saw the movie, though I had grown up with a couple cues off the soundtrack.  Some movies I see once and I've forgotten them a couple weeks later.  Some movies I see once and they stick with me for thirty plus years.  Silent Running is one of the latter.

While Silent Running isn't one of my favorite movies, it's a movie I appreciate and I'm glad I rewatched it for the Robots in Film blogathon. 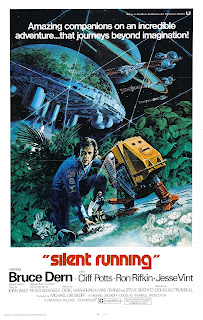 Rather like Wall-E, it's set in a future where nothing green grows on earth anymore.  To preserve the last natural vegetation, several giant space freighters were sent into space, each carrying several greenhouse domes, each preserving a different type of natural environment.  For eight years, the ships have been in orbit out near Saturn.  Then the order comes from earth -- detach and nuke each dome and return home.  They need the big spaceships for other purposes, and no one needs the forgotten forests anymore.

Our protagonist in this story is Lowell, played by Bruce Dern.  He finally gets to play a good guy, though some could argue that Lowell comes a bit unhinged.  And maybe he does.  Your opinion may vary depending upon how much you love the natural world and how far you'd go to protect it.  But I personally love Bruce Dern in this movie, and I love his character.  I have to admit I relate pretty strongly to his passionate caretaker character, who ends up disobeying the nuke orders quite violently to save his favorite dome from destruction.  Where the other crew members rotate on each year and take care of the running of the ship, Lowell has been with the ship caring for the domes the full eight years.  Bruce Dern is perfect for this role.  Watching his horror at the irreplaceable loss as the other ships gleefully jettison and blow up their own domes one by one is heartbreaking. By the time they come for his dome, you know he has to act. 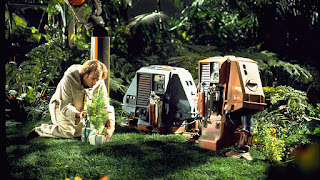 And that brings us to the robots in this movie:  Drone 1, Drone 2, and Drone 3.  Or as Lowell renames them:  Dewey, Huey, and Louie, in that order.   They are basically maintenance robots, designed to keep the giant spaceship running.  But, they're also reprogrammable, and once he's alone on the giant ship, Lowell reprograms them to do all kinds of new stuff to help him survive.  He programs them to perform surgery, to play poker, and, most importantly, to care for the garden.  The robots are boxy, a bit awkward, have no mouths or eyes or any human features, but they quickly take on personalities after he reprograms them, and they appear to convey what they're feeling to some extent.  They feel the loss of Louie, they consult each other during a poker match.  It helps that Lowell talks to them as if they're human.  Huey, Dewey, and Louie are crucial to the plot of this movie, and I love the ending of this film.  The three robots are acted by real people, which accounts for their unique movements and the more human emotions they engender. 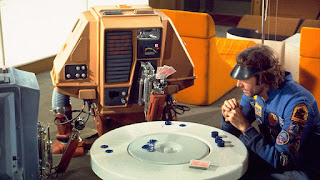 The title of the movie does indeed come from submarine talk, as Lowell attempts to fake his ship's destruction to throw off the other ships and goes silent so he can escape with the last precious dome.  When that ultimately fails, he's forced to take even more drastic measures to preserve the dome.

This movie plays a bit dated now, the montages with the sung songs really jar by today's standards, but the effects, the cool design of the ships, the diverting go-kart-like vehicles, and robots are quite great.  I watched the making of extra on the DVD, which I really enjoyed.  This movie was made on a tight million dollar budget, as an experiment, in a quick 32 days.  They filmed it on a decommissioned aircraft carrier, Valley Forge, redressing the carrier to look like a space ship instead of a naval vessel.  It looks pretty fantastic, particularly the use of the giant aircraft hangar, which in the movie is a storage area and a homemade racetrack for their all terrain vehicles.  (One of the memorable scenes I have never forgotten.) The spaceship in the movie is also called Valley Forge.  The aircraft carrier gives the spaceship halls and rooms and control room a real feeling that I doubt constructed sets would have achieved.

I have had a life-long attraction to botanical gardens.  My favorite part of any county/state fair was always the garden area.  Something about waterfalls and ponds and trees in an enclosed building always fascinated me.  There was a Bank of America building in North Hollywood that we used to go to back in the 70's that had a mini botanical garden behind glass, with a waterfall and trees, and I was utterly entranced by it as a child.  Best part of going banking with my mom was just getting to visit that little garden.  I remember it to this day.  So, I love the geodesic domes in this movie, each with its own set of trees, plants, water, animals...  Right up my alley. 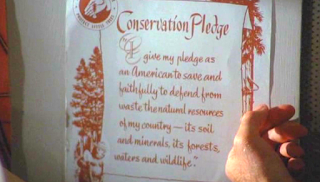 My thanks to Quiggy and Hamlette for hosting this Robots in Film blogathon!  Check out the other entries to read more about other robots in movies! 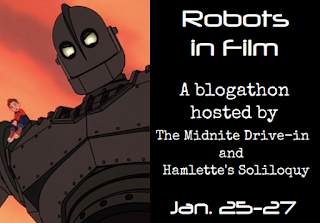 Next time you visit, we'll take you to the Botanical Gardens! I love going there at some point in the winter or early spring when we're tired of the cold brown world and ready for green. I always take several hundred photos and then never get around to sharing them anywhere.

Anyway, yeah, Bruce Dern as a good guy would be neat to see! I'm so extremely used to him as an inept bad guy (thanks to seeing Support Your Local Sheriff a zillion times growing up) that I think I'd enjoy seeing him in a very different role instead of just a different flavor of bad guy.

I would love to go to the Botanical Gardens. Always a safe bet with me! LOL.

Bruce Dern is still Bruce Dern... still a bit twitchy, but yeah, I like seeing him play a non-villain. In the "making of" extra, he talks about how cool it was to get offered a role that wasn't a bad guy.

I haven't heard of this film before, but I love watching Bruce Dern and the plot should keep me glued to the couch. Thanks.

Natural Herbal Medicine To Cure {HERPES DISEASE} TOTALLY HERE
Do you need a solution to cure your Herpes Disease contact Chief Dr Lucky to help and he will surely help you to cure your Herpes Virus .. I have suffered from Herpes-2 Virus for 4years ago that almost took my life. But one day I was searching the internet and I found Chief Dr Lucky saw so many testimonies on how Chief Dr Lucky helps people in curing their deadly diseases, and I contacted Chief Dr Lucky, asked him for solutions and he started the remedies for my health. He prepared herbal medicine for me and I received the herbal medicine and after using it for 2 weeks my condition has greatly improved, all my symptoms including Abdominal pain, Nausea and vomiting, Loss of appetite stopped, so I went to my doc and was confirmed negative. I am Herpes Virus free! contact the herbal doctor via his email> chiefdrlucky@gmail.com also visit his page> http://facebook.com/chiefdrlucky Website> Https://chiefdrluckyherbaltherapy.wordpress.com/ or his cell number / WhatsApp> +2348132777335