So, the We Love Shakespeare week is kicking off with a tag.  Here are my answers. 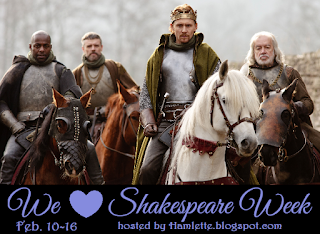 1. When and how did you first encounter Shakespeare's plays?
In 7th grade, when my school showed Franco Zeffirelli's Romeo & Juliet over two days on a huge screen in the school auditorium.  I was completely engrossed, and I balled my eyes out for about a solid hour after the play ended.  That particular version of Romeo & Juliet remains my favorite Shakespeare play to this day. 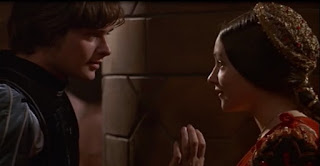 2.  What are your favorite Shakespeare plays?  (Go ahead and list as many as you like!)
Romeo & Juliet, Henry V, Hamlet, Troilus & Cressida, Macbeth 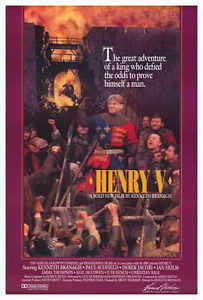 3.  Who are some of your favorite characters in his plays?  (Again, list however many suits you.)
Henry V, Iago, Mercutio, Hector, Banquo. 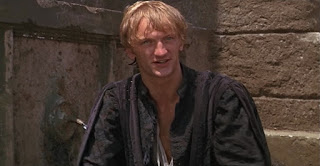 4.  Have you seen any of his plays performed, whether live or on film?
Boatloads.  I believe I may have actually seen more performed live than on film.  I have definitely seen more variety of plays live.  I had the privilege of attending the Oregon Shakespeare Festival in Ashland Oregon when I was in high school.  My best friend's family took me along, and it was wonderful and amazing.  We saw several plays there and that's where I first saw Troilus & Cressida and loved it.

I also got to see two Shakespeare in the Park productions in NYC.  Richard III with Denzel Washington was the highlight and one of my favorite live plays, though Taming the Shrew with Morgan Freeman and Tracey Ullman was right up there as well.

And then, of course, there are the myriad movie versions of various plays I've seen.

And opera versions, though these don't use the text, but Otello is one of my favorite operas, I prefer it to the play.  And it was watching Simon Keenlyside in the opera version of Macbeth that slowly made me appreciate that play. 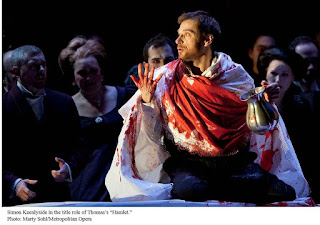 5.  Have you read any of his plays?
Many, though mostly because of high school and college courses.  The first play I ever read was The Taming the Shrew, in a high school Shakespeare club run by one of the instructors, where we would meet at her house once a week and read a scene or two aloud, and she worked with us to both understand the words and how to speak them, and the history and social conventions of the time period.  I read Bianca's role.  The only play I've read multiple times just for myself was Henry V.  I fell in love with Ken Branagh's movie (saw it about 15 times when it came out in the theater), and I read it at least that many times after.  I had most of the play memorized, the only Shakespeare play I can say that for (though I had Ken's abridged version memorized, not the full text).  The Upon the King speech remains my favorite soliloquy of all the plays I'm familiar with.

6.  Share a dream cast for one of your favorite Shakespeare plays.
I'd like to see Othello with Idris Elba and Chadwick Boseman alternating in the title role, and Daniel Craig and Michael Fassbender alternating as Iago, so I can go enjoy both casts.

I also wouldn't mind seeing an updated version of Hamlet set in some unnamed fictional Latin country, with Antonio Banderas as Claudius, Sofia Vergara as Gertrude, Oscar Isaac as Hamlet, Diego Luna as Horatio, Andy Garcia as the ghost of Hamlet's father, America Ferrara as Ophelia, Rodrigo Santoro as Laertes.

7.  What draws you to Shakespeare's plays?  (Language, themes, characters, the fact that they're famous, whatever!)
Same thing that draws me to any story.  I have to like the plot and characters.  I have to want to be the characters, or at the very least relate strongly to them.  I find it interesting that I don't like modern comedies, nor do Shakespeare comedies speak much to me either.  I much prefer the tragedies and historical plays.

8.  Do you have any cool Shakespeare-themed merchandise, like t-shirts or mugs or bookmarks, etc?  Share pictures if you can!
Nary an item.

9.  How do you go about understanding his language?  (Do you prefer copies with translation notes, look things up online, or just read so much stuff written in Elizabethan English that you totally know what everyone's saying?)
I didn't realize it was supposed to be hard.  Maybe because I've been reading/listening to Elizabethan English for nearly 40 years?  Sure, if there were words I didn't understand, I'd look them up in the dictionary, but I have little problem understanding what is being said.  Context and action tend to make it quite clear.  You don't have to know the meaning of every single word to understand what characters are saying.  I think it's a mistake to get hung up on language and it might even take away from the experience.  (Here speaks the person who grew up watching operas in Italian or French, often with no subtitles, and could follow story and what they were saying based on limited knowledge of the language and context and action.  So yeah, understanding every single word is not remotely a necessity to appreciating Shakespeare.)  There's a beauty to listening to Shakespeare -- done well -- that goes far beyond the individual words.

(love this version of Upon the King)

10.  What are some of your favorite lines from Shakespeare?  (Maybe limit yourself to like ten, okay?)

I'm only picking lines I can quote from memory and that I actually say to myself on a regular basis, so these are not going to be displayed in proper play format. They're also going to be mostly from Henry V as that is the play I know far and away the best.

She is the fairies' midwife , and she comes in shape no bigger than an agate-stone on the fore-finger of an alderman...  (okay, this is kind of cheating, because the reason I can quote this line is not because of watching/reading Romeo & Juliet, but because Simon le Bon quotes it in Duran Duran's video for Night Boat, and I have seen that far more times than any Shakespeare play...  But still, I quote it to myself a lot, and it is Shakespeare.)

I tell you truly, herald, I know not if the day be ours or no. (Henry V)

And then to Calais, and to England then, where ne'er from France arrived more happy men. (Henry V)

So, if a son, that by his father is sent about merchandise do sinfully miscarry upon the sea, the imputation of his wickedness by your rule should fall upon the father that sent him.  But this is not so.  (Henry V)

To be, or not to be, that is the question. (Hamlet) 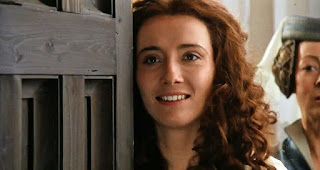