I'm so glad I got to see this film on the big screen.  It was really good, though not for the faint of heart.  The camera movement is silky smooth as it does its astoundingly edited one continuous shot throughout.  The editing is flawless.  Don't know how they did it, but the result is magical.  I got teary twice, not from anything sad, but just from the power of the visuals coupled with the score by Thomas Newman.

The scene that goes with "The Night Window" cue... holy smokes.  I would go see this movie again, just to experience that moment again alone.  The soaring music is one of best cues I've heard in years.  It's got some Ralph Vaughn Williams influence, but even more, it's got some exquisite Alan Hovhaness-ish going on, but given that those are two of my favorite classical composers, I was in heaven.  I purchased the score within 5 minutes of getting home from the movie.  I have not needed a score so badly in years.  How I've missed real powerfully emotional music that makes me want to listen to it in headphones and disappear into the notes, but "The Night Window" does that and then some.

I loved the simplicity of this movie.  Our heroes must deliver a message within twenty-four hours to the front line to stop the troops from walking into an ambush.  That's it.  The journey to achieve that goal is at turns violent and beautiful, brutal and gentle.  There are friends; there are enemy.  The way the movie is filmed, you become a third soldier, accompanying them on their mission.

This movie is a fantastic follow-up to Peter Jackson's documentary, They Shall Not Grow Old, which I saw twice in the theater (once when it came out, and once last December when it was re-released in 3D).  Everything the documentary showed and the soldiers talked about is here in 1917.  The documentary added a sense of depth and knowledge to the fictional film that just made it even more moving.

I saw this film with my mom and brother-in-law, and we all felt wrung out, but... rewarded.

I'm avoiding spoilers and the like, but I just have to say, the opening few minutes where we simply watch the characters walk from a field into the trench, but looking back at them, not actually seeing where we're going, but watching backwards, seeing the walls grow higher and higher on either side as we descend -- wow.  It was one of my favorite moments.  The choices made of where to put the camera, when to look ahead, when to look behind... it's masterful.  This is a powerful and extremely well done movie.  Kudos to everyone involved. 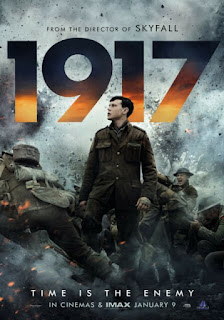