The Never have I ever Writing Tag


Rules
1.  Link to and thank the blogger who tagged you. (Thanks, Hamlette!)
2.  Include the graphic somewhere in your post (or make your own!)
3.  Answer the questions truthfully and honestly.
4.  Tag 3 bloggers. 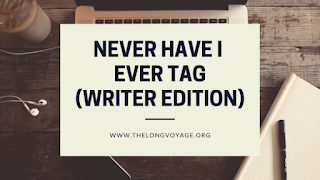 Never Have I Ever…

…started a novel that I did not finish.

hahaha.  Of course I have!  I've started many a novel that I didn't finish for all kinds of reasons.


…written a story completely by hand.

Many. Oh so blooming many stories.  Also a whole novel, and several half-finished novels.  Mostly, all this question does is date me.  There were no computers when I started writing.  I grew up writing everything by hand.  And then editing, and then re-writing it neatly by hand.  And it takes a very long time to copy an entire novel neatly and cleanly in cursive by hand, let me tell you.  And then, if it was important enough, possibly typing it up on an old typewriter.  Which also takes a long time because when you messed up, you'd have to type that page over.  So yeah, basically every story and novel I wrote through college (including all stories and essays for coursework) was handwritten first.

…changed tenses midway through a story.
No.

…changed my protagonist’s name halfway through a draft.
No. (or if I ever did, I don't remember it now.)

…written a story in a month or less.
A story?  Sure, many many stories were written in way less than a month.  A complete novel in less than month?  No.  Three months is the fastest I ever completed an entire novel.

…fallen asleep while writing.
No.  This is a very strange question.  Do people actually fall asleep while actively doing things?

…corrected someone’s grammar irl/online.
Rarely, but sometimes I can't stand it anymore.  Like people who use in regards to instead of regarding.  And misusing nauseous when they mean nauseated.  But only in real life, not online.  I tend to say very little online.

…yelled in all caps at myself in the middle of a novel.
Of course.  Usually of the "FIX THIS LATER" variety.

…killed a character who was based off someone I know in real life.
No.  I don't base characters off anyone I know.  Fiction and real life are two very separate things.  I write fiction to escape real life.  I'm sure as little fishes not going to put anything or anyone remotely reminiscent of my own real life in there.  That would defeat the purpose!

…not researched anything before starting a story.
Like nothing at all?  Not character background or world or anything?  No.  I have to know something, even a minimal something.

…written between the hours of 1 a.m. and 6 a.m.
Very rarely and really only during college when something was due the next morning.  I am not that kind of a night owl.  Them's sleeping hours! 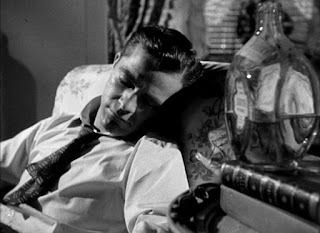 …drank an entire pot of coffee while writing.
No.  I don't drink coffee.  But I have been known to drink multiple pots of tea while writing.

…written down dreams to use in potential novels.
I used to.  Had one completed novel's premise come entirely from a dream.

…published an unedited story on the internet/Wattpad/blog.
No.

…procrastinated homework because I wanted to write.
Thank goodness homework is so far behind me, but yeah, back in the day, of course.  Constantly.  I did just about anything to procrastinate doing homework until the last possible moment, but writing was the most fun excuse.

…typed so long that my wrists hurt.
Only back before I had an ergonomic keyboard.

…spilled a drink on my laptop while writing.
Yes.

…forgotten to save my work/draft.
Only really back in the early days when computers didn't autosave stuff.  It was one of my primary complaints against computers when I first started using one... if you didn't save or something happened your work was gone for good. Handwriting was clearly the superior choice because your words couldn't be swallowed by the ether.  Yeah.  Nowadays, I hit ctrl-s every other minute, it seems.

…cried while writing a scene.
Yes, though not as often as you might think, given how many beloved characters I've killed off over the years. Usually, I get gutwrenched, but not teary.  But I did bawl when I wrote the ending of one of my novels, "While Gods Lie Dreaming."  And I cried all through writing the ending of my novella, "A Frost of Bones."

…researched something shady for a novel.
I don't know about shady, but stuff about murders and weapons, sure.

And there you have it.  I'm afraid I'm not going to tag anyone, cuz they people I would tag are already tagged.  But, snag if you want to!
Posted by DKoren at 9:25 AM

A map of Cimharas? Sweet! I should have included one of my maps. Why didn't I? (Well, possibly cuz mine are not as cool as that, lol.)

I had the same reaction as you (and Mads) to the falling asleep question. Does this happen to people? I mean, I've gotten sleepy while reading a book... and then put it down and gone to bed. I have fallen asleep while watching a movie a handful of times, usually while pregnant, lol. But while writing? My brain is MUCH too engaged for that to happen. Unfathomable to me.

See what happens when you get distracted by shiny gifs of the boys? LOL! (I didn't know you'd recognize it!)

Yeah. Exactly what you said.

In my defense, those particular boys are impossible to ignore. And should not be ignored.

" I write fiction to escape real life. I'm sure as little fishes not going to put anything or anyone remotely reminiscent of my own real life in there. That would defeat the purpose!"

Writing for me is escapism and I want to write about COOL STUFF. My life is legit boring!! The people in it are great, but I'd never write them into the sort of cloak and dagger tales that Jo March's Professor Bhaer would not approve of. ;)

Hi friend! I was thinking of you this evening...I saw Ralph Meeker in a movie, and he always brings you to mind. Just wondered how you are, but I see you haven't posted in awhile. Hope all is well!

Hi there! Awwww, I do love how many people think of me whenever Ralph Meeker pops up in a movie. :-D I still love him, too.

Yeah, I havmen't posted in awhile. I check blogger every day to read everyone else's posts, but... I just can't think of anything to say or write about here. I'm doing well, family's doing well. Little has changed in my daily routine, as I already worked from home. Hope you're doing okay and are hanging in there. I'm so glad to hear from you!!

I'll try to post something here, if I can figure out what.