Just finished enjoying the first disk of this show. It's nice to have an anthology series featuring a strong woman protagonist in almost every episode. There are five eps on this first disc. I have to admit, since I'm a huge Vic Morrow fan, I got this disc more to see his ep, "Keys to a Killer," than anything else. Alas, his ep had one of the weaker stories in the bunch, which is too bad, as everything else was great about it. Barbara Stanwyck plays a deputy and sheriff's wife, transporting wanted killer (Vic Morrow) to the authorities. The car crashes, and Vic goes on the run, Barbara in tow because they're handcuffed together, and, to not let him escape, she throws the handcuff key off a cliff, banking on him not shooting her because he won't want to drag her dead body around. She's right, of course, and then she sets about trying to figure out what will break him while leading him in circles. The ultimate answer is way too easy and neat and tidy and made me want to smack the television in irritation. Just get rid of that part, and it would have been quite goood in all aspects.

Vic Morrow is one of those actors who understands subtext and how to use it. He often slips in visual things that belie the dialog, exposing what the character is really feeling. He was a master of this, it's one of the reasons I love watching him in films and television. It's his acting that elevates characters as potentially cliche and throwaway as his Leroy Benson in this ep. He has one super neat moment in this ep that is pure Vic at work. Minor plot spoilers follow...

He finally realizes he's not getting anywhere fast handcuffed to Ms. Stanwyck. His only option to get away, he decides, is to go back and get his switchblade... and cut Barbara Stanwyck's hand off. Way gruesome and so unexpected in a 1960's tv show! But the thing is, he's come to rather like her. She's treated him relatively nicely as she draws bits of his life story out of him, and he doesn't really want to do it. He just doesn't see any other option, and if it's her hand or his life, he knows which way he has to choose.

His dialog is straight-forward, unrepentant, all "I gotta do this, and that's all there is to it" type stuff. The words don't say he's sorry or that he regrets this choice, but his actions do. His body language, his eyes... he's freaking out inside at the very thought of what he's going to do to her while the dialog says something else. And for one lovely moment in the midst of it, he presses his head to her hand, as if begging silently for her forgiveness. Subtext in action, baby. Dig it. I do so love Vic Morrow. 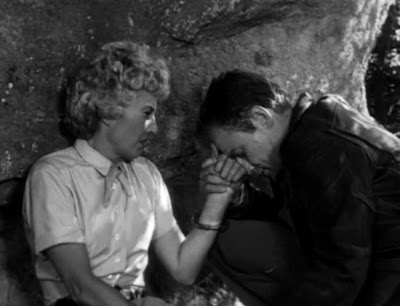 As for the other eps on the disk, their plots seemed to get consequtively better. My favorite of the eps was "The Secret of Mrs. Randall," a convoluted little melodrama about betrayal and love and redemption that was right up my alley. Barbara plays the president of an oil company, whose mother-in-law (who's chairman of the board!) gave her the position of president when her husband couldn't cut it! WOO! Gotta love strong women running oil companies! Barbara Stanwyck is excellent in every ep, as are the supporting casts. I loved Doris Packer, who played her mother-in-law in this ep. The two have some very nice scenes together.

I'm definitely looking forward to getting the rest of the discs.
Posted by DKoren at 5:36 PM

I also loved the first disc of this set. I need to get around to seeing the rest! The first episode had some interest, but I felt like Stanwyck's entrance with that rifle was a hard thing to top. My favorite was the oil company ep. It had a plot complex enough to be a movie; I couldn't believe they wrapped it up so fast. You had some great insights on Vic Morrow. Nice post.

Thanks for a great description of this episode. I've not seen this anthology yet, but hope too one of these days. I also agree about Vic Morrow, you've hit it spot on. He was a marvel at interpretation.

Ooh I'm getting this set for Christmas! VERY excited! :D

I actually had no idea that Barbara Stanwyck was IN every episode so now I'm even more excited!!

KC -- I loved her entrance too! You're right, very hard to top that moment. And she's so calm and in control. Love it! And we both like the oil company ep the best. It really was a great ep. I love how she doesn't explain herself to her mother-in-law, just stands firm, until the whole thing boils over.

Jacqueline - thanks! Vic Morrow did other, little neat things in the ep. Like the way he removes a stone from Barbara Stanwyck's shoe, then keeps rubbing her foot ever so gently, not even noticing he's doing it as he talks to her about his past. He really knows how to bring characters to life. I have the second disc in the series showing up tomorrow. Looking forward to seeing it too.

Kate! You'll love it! It's like getting a whole bunch of mini movies starring Barbara in one set! How can you go wrong with that? :-D

Oooooooooooooooh. Cowbly offered me a Netflix subscription for Christmas, and I turned him down cuz I really don't have lots of viewing time and the library has what I want usually... but they don't have this. I may have to ask him if I can change my mind!

Had to come find this since you mentioned you'd reviewed it too -- and I cracked up cuz we both screencapped the exact same moment. It was such a good one, like you said. Pure Vic Morrow nuance.

The ending was too pat, I agree, but the little twist about the key made up for it for me.